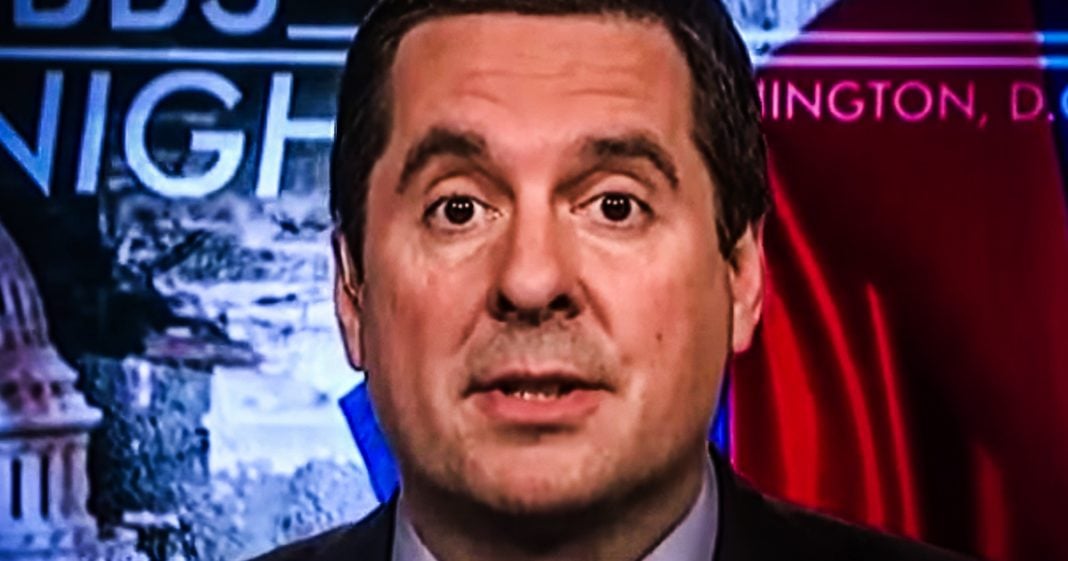 Republican Representative Devin Nunes plays the victim better than anyone else out there today, and he isn’t afraid to file frivolous lawsuits to prove it. Unfortunately for Nunes, filing lawsuits means that things come out, and he’s now been busted for lying about his wife being doxxed and harassed by a liberal group. Ring of Fire’s Farron Cousins explains what’s happening.

*This transcript was generated by a third-party transcription software company, so please excuse any typos.
Last year, a group called southern California Americans for Democratic Action filed a request to a school district out in California asking for emails from a specific teacher because they were looking for information that could possibly be used in a conflict of interest case. The school district complied, took them a very long time. They had to spend a lot of money, but they got this group, the emails, and these emails were then made public. Obviously this was a public records request and they found what they were looking for. They found that this particular teacher was a, you know, kind of working out a deal for a winery that her and her husband was going to open. Oh, and by the way, ah did I mentioned that our husband is Devin Nunez, Republican representative from the state of California. Well, after these emails were made public by a group called campaign for accountability, they cited some of these emails and some of their work, Devin Nunez grew furious, any filed a law suit because this group clearly had doxed his wife and not just his wife, but everybody else working at that school. And according to Nunez in his lawsuit, those teachers were then all harassed school had to spend thousands of dollars on added security. It was just a hell scape at this school. We’re Devin Nunez, his wife works while she was also working out deals for her winery. Well, it turns out according to new reports, none of that ever happened. Yes, the groups did get that information and yes, they did cite it and some of their work, but all of the harassment and the abuse and the added security at that school, according to the school district itself, according to the teachers at that school, none of it ever happened and Devin Nunez is lying. Now that doesn’t come as a surprise whatsoever. Nunez did eventually drop that particular lawsuit, but he’s now suing in the state of Virginia, a couple of different groups over the same issue because allegedly they docs to his wife and then then that was the harassment and all of that for not just his wife, but all the other teachers at the school. And of course, again, everyone involved has already said, dude, this never happened. Devin, you noticed didn’t happen. You are the king of frivolous lawsuits and let’s keep in mind that’s a statement being made while Donald Trump is the president of the United States because Devin Nunez still has his lawsuit going against Twitter. The is going against the Twitter accounts, making fun of him, claiming they’ve defamed him by being Devin Nunez cow. Devin Nunez is great at playing the victim, but that’s all he has folks. This man has no ideas on actually how to govern. He has no ideas on how to, you know, make America great. He just wants to be the center of attention. And if it means having to play the whiny little victim, then he’s 100% going to do that. And that’s what he’s doing here. This second lawsuit that Nunez is filed is more than likely going to be thrown out or Nunez is going to drop the lawsuit altogether because he knows now that we know that he’s lying about this, he’s going to cost these groups tons of money, which is likely the plan. You know, maybe try to bleed them dry, even though I know this is a frivolous lawsuit. And then I walk away the champ because I may not have won the court case, but I’ve taken a lot of their money away. This is actually a common tactic, uh, for corporations to do to climate scientists. Something they began several years ago. They knew they couldn’t beat him with science, so then he started decided to start suing them to just drain them of their time and resources. And that’s likely what Nunez is doing here. But if that is the case and he has filed a lawsuit based on false pretenses, he better be careful because much like with some of those climate scientists that got sued, these groups could turn around and sue Devin Nunez for the damage that he’s caused them. And then he could be out a ton of money. And that is the most likely scenario out of all of this.