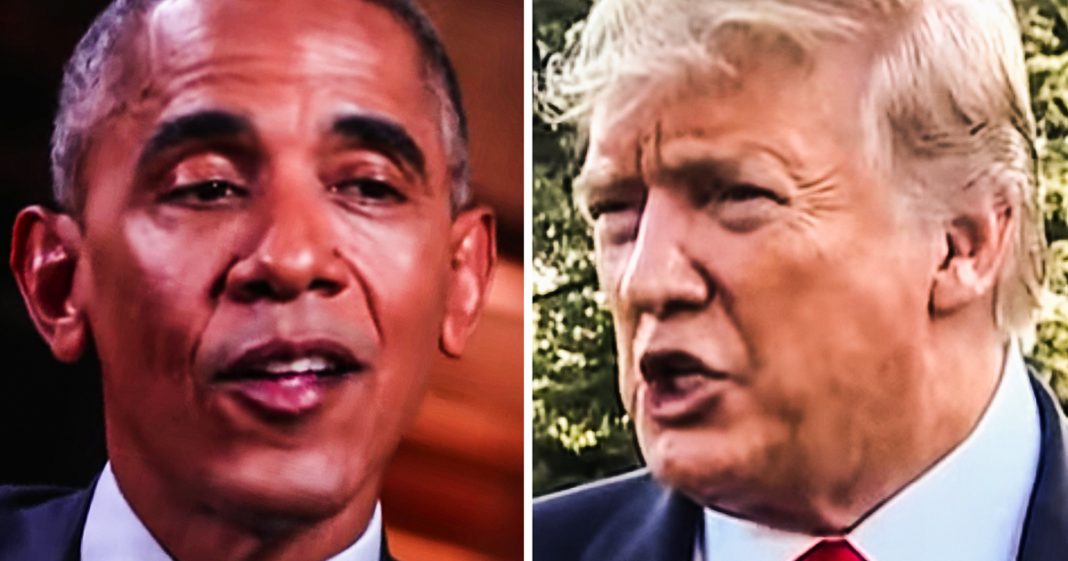 Donald Trump is not happy that he is the one still being investigated when there are obviously other crimes that need to be exposed. Specifically, the President says, the deal that Obama has made with Netflix to produce some programming for the streaming service. The President actually said that this deal from a former politician was in need of investigating, showing how deranged he has truly become. Ring of Fire’s Farron Cousins discusses this.

*This transcript was generated by a third-party transcription software company, so please excuse any typos.
It’s no secret that Donald Trump is being investigated for everything under the Sun right now. His hush money payments to a porn stars and playboy playmates, his emoluments clause violations, his tax returns, his business tax returns, and pretty much anything else you could imagine. So yeah, the guy’s a little investigation, uh, you know, tired right now, doesn’t want to deal with it anymore. And he thinks that all of these investigations are witch hunts. They’re all hoaxes. Just like he claimed the Mueller investigation was a hoax. Well, yesterday he finally snapped. I guess he kinda hit that point where he just couldn’t take it anymore and Dang it. He wants the House Judiciary Committee to look at the real scandals. And the real scandals are Barack Obama’s book deal and his deal with Amazon to produce some programming for the streaming platform. Those, according to Donald Trump, are the real crimes that house Democrats better start looking into because yes, no president ever after leaving office has, you know, cashed in because people want to hear what a president has to say. Donald Trump’s an idiot. And I can’t say that enough. And I feel like I say it all the time, and that’s still not quite enough. I mean, obviously this is classic deflection. He’s trying to say, yeah, but look what Obama’s doing. I’m losing money. He told us on Twitter, he says, I’m losing billions by being president. But I did it because I wanted the honor of being your president. Meanwhile, Obama’s out here writing a book and getting money for it. How? Which one of us is the real crook. Trump wants to know, this is actually what Donald Trump tweeted. So they say, okay, let’s look at everything else. And all of the deals that Trump has done over his lifetime, he’s referring to the fact that Mueller allegedly came up with nothing, but it doesn’t work that way. I have a better idea. Look at the Obama book deal or the ridiculous Netflix deal. Then look at all the deals made by the Dems in Congress, the congressional slush fund, and lastly, the inspector general reports. Okay, let’s look at him. What kind of bad things do they say about Democrats? Because inspector general reports tend to be taken pretty seriously. Uh, people do read those. They do make headlines. And as far as I can remember for God, probably at least the last two years, uh, all the IG reports that have come out have been about things like, oh, you’re violating the emoluments clause. Oh, members of your cabinet are exceeding the spending limits and broke the rules. And of course, Kellyanne Conway’s countless hatch act violations. Those have all come from the inspector general. So if you want us to start looking at those reports, we have solutely well, because we already have been and we’ve been reporting on them since you came into office. Obama’s deal with Netflix. I don’t care if you love Obama, you hate Obama, where you think he’s, whatever. That’s not illegal. The man’s not in office anymore. He’s not funneling money. He’s not laundering money. He’s not getting paid under the table. He’s not committing tax fraud. He’s a former president who was hugely popular and Netflix wants to capitalize on that by giving him lots of money to go make some programming. There is literally nothing wrong with that. Now, depending on your opinion of Obama, you may not be happy that it’s happening, but oh well that’s life. Suck it up, buttercup. These things happen. It’s like if George W. Bush got a deal to start a new sit-com, I wouldn’t sit here and say that it needs to be investigated. I would just say, that’s dumb. I’m not going to watch it, and then I’d move on with my life and forget all about it, but I guess Republicans aren’t able to do that are ya, you know, for the group that always likes to whine, that the other side is always triggered and the other side’s a bunch of snowflakes. You guys sure as hell do seem to dwell on the most tiny, innocuous little things out there and you let it burrow down into your skin to where it just becomes this constant irritation that you don’t know how to rid yourself of. That’s what happened with the Obama Netflix deal when all those Republicans came out and said, well, I’m canceling Netflix now. bruuuuuuh, I’m not going to do it anymore. Nobody cared, and I’m also willing to bet nobody actually canceled their Netflix subscriptions. Did you? He just wanted to make a scene because you hate Obama with everything that you’ve got. The real criminal, the real crook, the real guy who’s breaking the law. He’s the one still in the White House today, and I can promise you when he leaves office, nobody’s going to be offering him a buttload of money to produce some shows for Netflix.