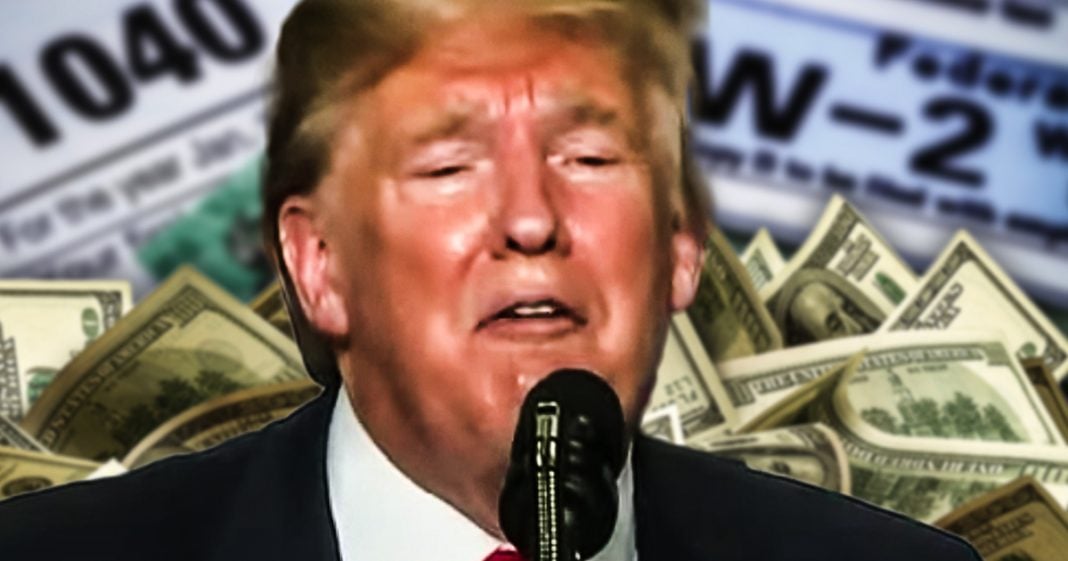 Prosecutors at the Manhattan district attorney’s office have subpoenaed 8 years worth of Donald Trump and his company’s tax returns as part of their investigation into the hush money payments the President made to Stormy Daniels. This could be a huge step forward in the investigation, and Ring of Fire’s Farron Cousins explains what exactly these prosecutors are looking for.

*This transcript was generated by a third-party transcription software company, so please excuse any typos.
Yesterday. It was announced that federal prosecutors at the District Attorney’s office in Manhattan had subpoenaed last month, eight years worth of both Donald Trump’s tax returns and his company’s tax returns. Now, these tax returns are part of the investigation that the Manhattan DA’s office is carrying out. A part of it is related to the hush money payments that Trump and his company made to Michael Cohen who made them to Stormy Daniels the reimbursement payments and they want to find out, did you Donald Trump and Trump organization classify these hush money payment reimbursements as legal expenses to Michael Cohen? Because if you did, that’s a crime. Now, here’s the issue with that. Yes, it’s a crime that would be against the law. Unfortunately it is not a felony, so nobody’s really going to get in trouble for any of that. How ever as the New York Times points out, if that misclassification, you know, filing them as legal expenses rather than hush money payments. If that was done in order to conceal or commit a nother crime such as tax fraud, bank fraud, wire fraud, anything like that, tax evasion, then Oh, guess what? That point it becomes a felony and you’re in trouble. Here’s the thing, folks, many corporations are able to write off their legal expenses. So if Donald Trump and the Trump organization did in fact file these hush money payments back to Michael Cohen as legitimate legal expenses, that would reduce the amount of tax that the company would owe, therefore that would be tax fraud. The payments would’ve been, uh, misclassified in order to commit another crime, which would have been tax fraud. So there you have a felony, and that is why prosecutors want to take a closer look at all of these tax returns. Now, we know that Democrats in the House of Representatives have subpoenaed six years of Donald Trump’s tax returns and the Trump administration lawyers have been fighting them every step of the way. And so far they don’t have those tax returns. Uh, that’s not exactly going to work in New York because this is a criminal investigation being carried out by the district attorney’s office. You can’t just say, nope, we’re not going to comply and you can’t counter sue to make the subpoena go away. Especially considering the fact that there is a sitting grand jury already with regards to this case. So if Trump’s lawyers do object, which they will, that’s immediately gonna go before the grand jury and the decision is immediately going to be handed down. That is not going to be ah generous to the Trump administration and then that’s the end of it. They get the tax returns, however we, the public will not get to know what is in those tax returns. That is going to remain confidential to only those involved in the case on less. This is used in a criminal prosecution, in which case, yes. Then it would become public evidence. So there is a lot obviously of caveats to every single little piece of all of this story, but I think the biggest takeaway is that yes, the DA’s office in Manhattan is taking this issue very seriously. They’re going after Trump on the avenues that we should have been going down the first investigation, and they’re doing a dang good job of it. They, uh, they’re very unlikely to be stopped by Donald Trump and his lawyers. But then again, if Donald Trump had absolutely nothing to hide, his lawyers probably wouldn’t object to any of this, would they? But that’s what these prosecutors are trying to find out. What are you hiding? How did you classify these payments? What did you write off on your taxes? And then let’s see if we can connect the dots to a felony once we figure all that out.