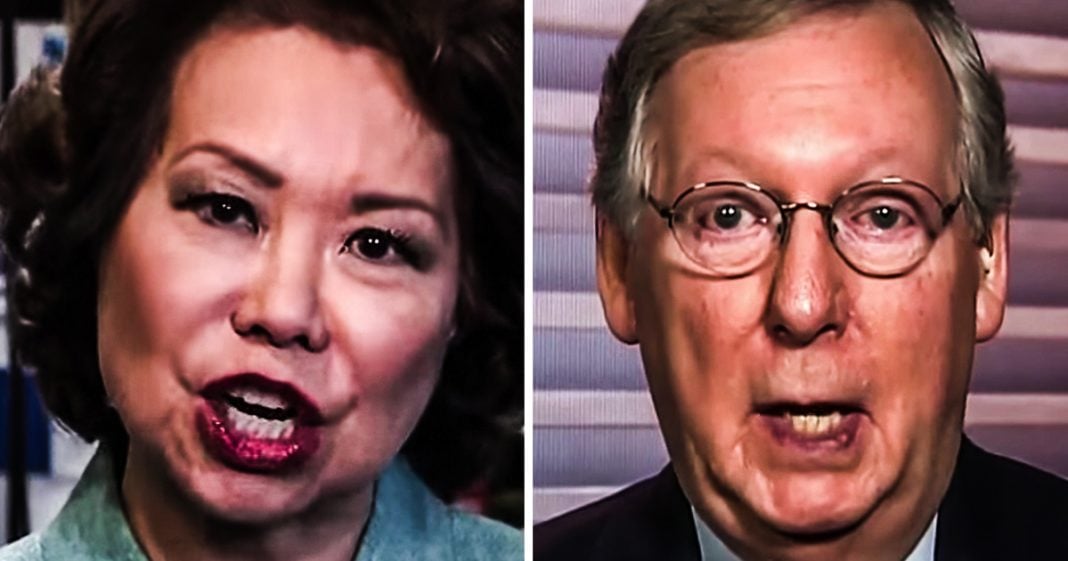 Transportation Secretary Elaine Chao is now being investigated by the House Judiciary Committee for allegedly steering contracts to a company that she didn’t divest from and that is also owned by her family. Chao is the wife of Senate Majority Leader Mitch McConnell, and reports have also suggested that she is sending contract money to McConnell’s wealthy donors in Kentucky. Ring of Fire’s Farron Cousins explains what this investigation means for both Chao and McConnell.

*This transcript was generated by a third-party transcription software company, so please excuse any typos.
Transportation Secretary Elaine Chao is now officially as of yesterday under investigation by the House oversight and Reform Committee. Now this is bad news, not just for Elaine Chow, but also for Mitch McConnell, her husband, because Mitch McConnell has been the beneficiary of a lot of the things that Elaine Chao has been accused of wrongfully doing during her time as the transportation secretary. Here’s what Democrats say. They’re focusing on that this investigation, and I’ll explain in a moment why I say they say they’re investigating this part. It is that Elaine Chao’s father owns a company, uh, for most group that gets a lot of money from China. That’s where most of their funding comes from. Actually, Elaine Chao gets money from that company because she did not divest a, she lied about divesting and then she tried to, uh, steer a lot of money their way was gonna go to China multiple different times with her father while she was transportation secretary and, you know, meet with the people who are funding her daddy’s company. And that’s pretty much a massive conflict of interest. And that’s where Democrats say, listen, we’re going to get to the heart of this because she has like four different canceled China trips, uh, over the last two and a half years. All of them were supposed to be this, but then every time somebody would bring up the conflict of interest, she would say, okay, fine. I won’t do it. I’ll reschedule six months from now. Everybody will forget, but they didn’t forget. There’s the bigger issue though, and this is what I think Democrats are really trying to get at. They just don’t want to freak Mitch McConnell out now for several months now. We have gotten plenty of reports showing, not suggesting, but showing that Elaine Chao as transportation secretary has been directing a hell of a lot of money in government contracts to companies in Kentucky where Mitch McConnell is the senior senator and all the contracts seem to be going to people who’ve put a lot of money into her husband’s campaign. Huh? What weird luck for those people, right? You just happen to wholeheartedly and financially support this scumbag Republican senator and then, oh my goodness, you get all these lucrative contracts from his wife who just happens to be transportation secretary. So you reward Mitch McConnell by giving him even more money in hopes that in the future you’re going to be rewarded with even more contracts. See that’s the one that’s the issue that could easily not just take Chao out of office but also Mitch McConnell and that’s where Democrats I believe are really going to be focusing this China deal with Chow. Yeah, that’s pretty cut and dry. That’s pretty straight forward. But once they start getting documents, once they start getting all the material hidden away in the transportation secretary’s office, they’re going to find out that there has been some pay to play between her Mitch McConnell and his donors and that ladies and gentlemen would be probably just as rewarding is taking down Donald Trump himself. Mitch McConnell has caused far more damage to this country than Donald Trump has and Mitch McConnell possibly could be causing more damage to this country long after Trump’s out of office. And if this is the only way we can take them down, then so be it. Because it’s way past time for Mitch McConnell to leave a lot of these republican holdovers from the Macondo era. Lindsay Graham Einhoff. Those folks, yeah, we have to get rid of them. And if we have to do it by finally exposing all of their fraud and corruption to the voters in their states, then that’s what we have to do. And I think that is exactly what Democrats are hoping to do with this investigation.