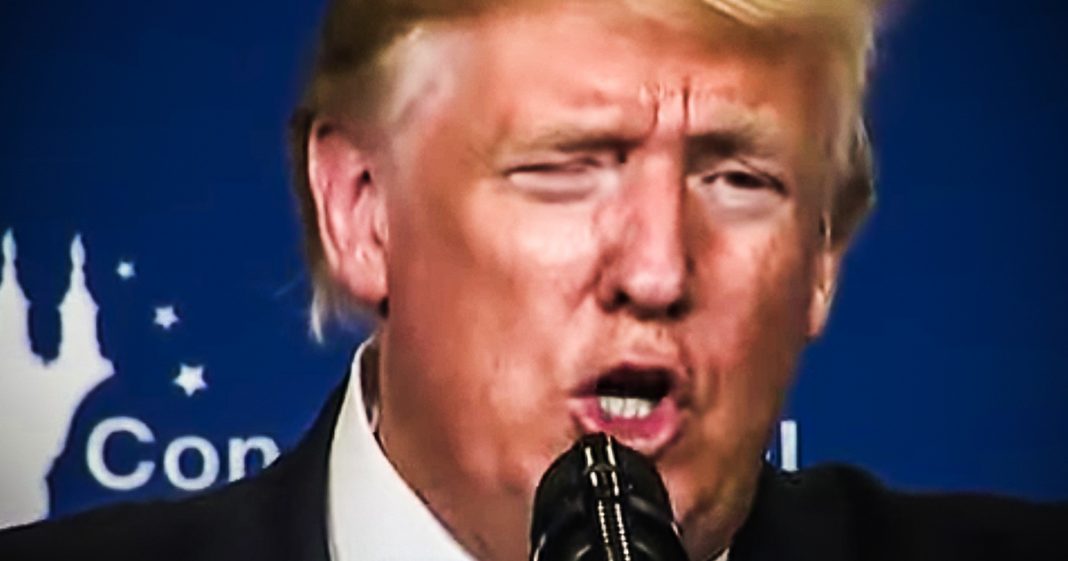 After Saudi oil refineries were attacked over the weekend, Donald Trump took to Twitter to not only assure the country that we have plenty of oil, but also to warn Iran that the US is “locked and loaded” and ready to attack. We are about to enter another war over oil, even though we’re allegedly good on our supply. This country is addicted to both petroleum and conflict, as Ring of Fire’s Farron Cousins explains.

*This transcript was generated by a third-party transcription software company, so please excuse any typos.
Well, I know we all got excited when John Bolton abruptly exited the Trump administration roughly a week ago thinking, Hey, maybe this means we’re not going to war with Iran anytime soon. And yeah, that lasted a comfortable seven days yesterday. Sunday Donald Trump tweeted out the following, Saudi Arabia oil supply was attacked. There is a reason to believe that we know the culprit are locked and loaded depending on verification, but are waiting to hear from the kingdom as to who they believe was the cause of this attack and under what terms we would proceed. Now here’s the back story in case anybody slept through the entire weekend. Uh, oil refineries slash tankers slash sites, uh, were attacked in Saudi Arabia. Two of them. And the reason I say refineries, tankers, sites, whatever, cause there’s a lot of conflicting reports right now. A lot of reports say was tankers, some say refineries, others are just saying oil sites. But either way, the oil supply chain in Saudi Arabia was attacked this past weekend in a drone strike. The Trump administration firmly believes that Iran is the country that did this. And so Donald Trump is out there saying, we are locked and loaded. Those were his words, locked and loaded, just waiting on Saudi Arabia to tell us where and when. Because apparently as Tulsi Gabbert pointed out on Twitter this morning, we’re Saudi Arabia’s bitch. And that is absolutely the sad truth. Tulsi Gabbert as 100% right about that we are, and Trump admitted it in this tweet. We’re just waiting for them to tell us what to do. You know, allegedly the greatest military on the planet, and we do spend more than any other country. In fact, we spend more than the eight countries behind us combined. And now we’re waiting on our oil. Uh, you have the, well, that’s a very true for slip too. We’re waiting on our all orders from the Kingdom of Saudi Arabia. So not only does this prove that the United States government is taking orders from Saudi Arabia, but Donald Trump is also telling us we are as a country addicted to both war and oil because there’s no denying. There’s no sugarcoating this at all. This would be a war over oil. In fact, Donald Trump is so freaked out about the oil supply that he spent the last 24 hours on Twitter telling us that we’re totally good with oil folks. Don’t worry. Don’t worry about our oil here in the United States. We’re gonna unlock some of the strategic petroleum reserve. We’re going to get that flowing. He had one tweet that was literally just an all caps, a yelling that said plenty of oil, which I believed he was trying to order something from McDonald’s, but opened up his wrong app. But nonetheless, it’s all about oil, oil, oil, oil, oil. That’s why these refineries were actually attacked over there, regardless of who did them. They did it because they understand that the planet and the United States especially, is addicted to oil. If only we would have begun 15 years ago transitioning to a clean, renewable energy infrastructure here in the United States. If GM hadn’t come forward in the late nineties early two thousands and killed the electric car, this wouldn’t even be on our radar right now. We would be a top export or in clean renewable energy. These refineries maybe wouldn’t have even existed anymore if the world had begun transitioning. But because we’re so desperate to get those last few drops oil out of the ground so we can burn them as quickly as possible. The bad people, whoever they may be, they know where to strike. They know what’s going to hurt us the most. It doesn’t have to be human lives that they take. Just destroy that energy infrastructure and suddenly you can disrupt entire countries and of course provoke the United States to have one of the dumbest responses possible.