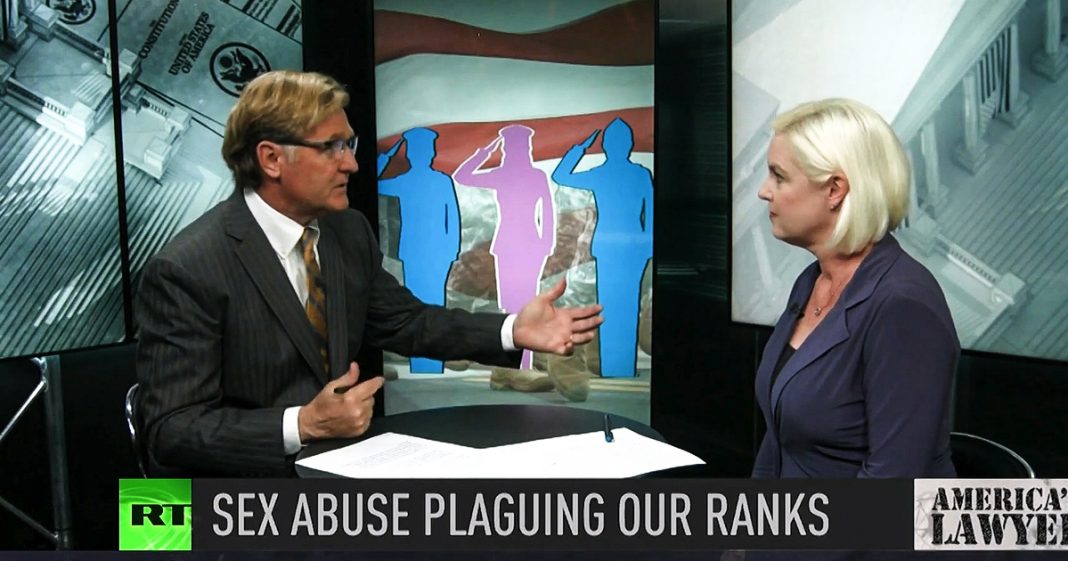 Via America’s Lawyer: Mike Papantonio is joined by legal journalist Mollye Barrows to talk about the rampant issue of sexual assault within our armed forces. While the media has been quick to jump on stories of Harvey Weinstein, Larry Nassar, and Jeffrey Epstein, it seems little thought is given to the toxic culture of sexual abuse among our men and women in uniform.

Mike Papantonio:             The past couple of years of media coverage have been riddled with stories of survivors sharing their stories of sexual abuse from Hollywood mogul, Harvey Weinstein, to disgraced physician Larry Nasser to the horrific allegations against the late financial guy, Jeffrey Epstein, who we see all the time.

Mollye Barrows:                It’s bad. I think it’s been an ongoing problem for decades Pap. Everyone’s known about it. The Department of Defense has certainly known about it. All branches of the military are impacted by sexual assault, sexual harassment, and also played with the problem of really not being able to find an effective way to grapple with it and deal with it. They see the impact when they finally do have people come forward and report at the VA’s office or within military ranks when they’re suffering from PTSD or other problems, but it is such a pervasive issue.

Now as far as the exact number, they don’t exactly know because they believe a lot of these cases are under reported, under reported rather. But, the department of defense did an anonymous survey and they sent it out to all branches of the military for 2018. Based on that anonymous survey, the results were 20,500 cases of reported sexual either assault or some sort of harass, but it was a majority of some sort of sexual assault.

And so, the majority who they found that was a, and it’s not just women, one of the least talked about parts of this is men on men sexual assault, which is an added degree of shame and humiliation, if you will, for the victim as to not come forward. But they did find in this latest survey that among the most vulnerable were women 17 to 24 because most of what they found is that these women were being attacked by people that they already knew, either superior officers or people that they were already in close contact with.

And that’s what they’re learning. At least, even though these results are anonymous, they can at least say, okay, at least they feel comfortable in this environment reporting. It’s giving us an idea of what is happening, when this is occurring, how they can deal with it. So they know the problem that exists. It’s just been a hard time getting a change in the culture to where they feel comfortable reporting it because…

Mike Papantonio:             You know, there are plenty of women that, you know, I’ve known in my lifetime that could sit in and be part of special op kind of training. And the more that, the more that they’re centered in these various things.

Mike Papantonio:             Whether its ranking, whether special operations, those types of things. Then this, this does, it, it does affect the amount of, of abuse that we’re seeing. But I’m really wondering what, what’s fueling this, this problem? It’s been, and we’re talking about it now, but it’s been around…

Mike Papantonio:             The tail hook story started then, we started taking a look at it. But what, what’s fueling it now?

Mollye Barrows:                I think it’s a culture of silence like you see in a lot of institutions, but what makes the military perhaps even more vulnerable to this is like you said, that you know historically forever, we haven’t really had women necessarily in the ranks to this extent that we’ve seen in the last few decades. But aside from that, the very way that it’s put together, you have unit cohesion and almost like officers in a law enforcement unit. It’s your partner, but extend that wider out to the all the people that are in your unit.

And if someone does something to you and you tell on them, even if it was a crime, like a, a sexual assault or rape or some sort of assault, if you tell on that person, especially if it’s a superior officer, then there’s this general feeling that you have betrayed the ranks. You’re no longer somebody that we can trust. And it’s almost like it takes out the poison. You’re labeled with the baby and the bathwater. Throw out the person who’s complaining.

Mike Papantonio:             So I saw handling on this on something that I read not long ago where it was talking about Israeli military where everybody’s required to be in the military. It’s like requirement.

Mike Papantonio:             And the, the assimilation of females into the military has, hasn’t been totally seamless, but it’s been a lot more seamless than what we’re seeing here in the United States. Because there’s no distinctions. In other words, if somebody wants to work with Mossad, if they want to…

Mike Papantonio:             Work at the highest ranks of military engagement in special operations, and I mean there’s no hold back. There’s opportunity across the board.

Mollye Barrows:                In other studies that they’ve done in other countries where they talk about basically putting men and women together in the military. They found that the better the integration, the fewer reported incidents of sexual assault. Because like you’re talking about, think it goes to that idea of you’re treating somebody like an equal or maybe even going back to the idea of a healthy unit. If you’re all working together, when you know somebody, you’re less inclined to believe stereotypes about them or you’re less inclined to lump them into your a less than category.

Mollye Barrows:                So they found that, they think that that’s part of it. But part of it too, is just getting in there and feeling like you’re not, you know, that you’ve got some rights, making it easy to report, making it easier to investigate, and then you have a whole other element, which is a whole other topic about military law and how that helps keep a lot of these cases from coming to light.