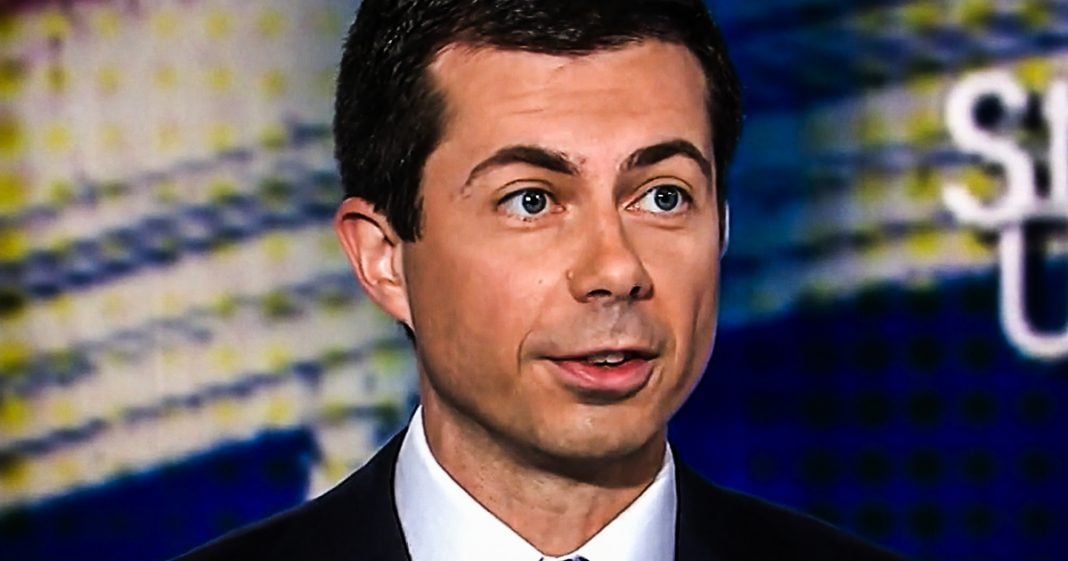 South Bend mayor Pete Buttigieg told CNN this weekend that a public healthcare plan would probably be better than private insurance, but he isn’t going to force people to get on a government program. In other words, Buttigieg doesn’t support Medicare For All, and is fine with letting insurance companies continue to rip off American citizens. Ring of Fire’s Farron Cousins discusses this.

*This transcript was generated by a third-party transcription software company, so please excuse any typos.
South Bend Mayor Pete Buttigieg appeared on CNN state of the union this past weekend where he came out firmly against Medicare for all. She Buttigieg doesn’t believe that we should be forcing people in this country onto a government run healthcare plan. In fact, he said the difference in my vision for Medicare for all who want it versus Sanders Warren Vision is I think we can do that and not order Americans on to that public alternative. So there is just, as a lot of us expected at the time, Pete Buttigieg sitting there trying to straddle the line of, well, let’s have medicare for all who, who wanted, but let’s also have the private insurance and let’s keep all of them happy. And I’m just a real nice guy to speak lots of languages and everybody should just please like me because I’m doing my best to appease everybody by not really taking a stand on anything. Mayor Pete, that’s what you’re doing. That’s what it means when you’re straddling the line. It’s not that, oh wow, look at this person. They’re such a great leader. It’s no, I’m too much of a coward to take the necessary steps to fix what’s wrong with this country. That’s what I see when I see people do that and that is exactly what Buttigieg is doing right now. There was a time maybe about a year ago, maybe even less than a year when I thought Medicare for all who want it was that was the best option was a great idea. I’m not that person anymore. A lot has changed in the last 12 months. Folks. Medicare for all who want it is a stupid idea and if I could go back in time, I would slap the hell out of myself forever even suggesting that it was a decent proposal. It’s stupid, it’s bad, and it’s not enough. Anything that doesn’t cover every single person in this country is eventually, going to get hacked to hell and back. That’s why you’ve got to go big and you’ve got to go all in and you got to get everybody covered under the exact same plan. You can’t take that away. Oh sure. Republicans will try, but the public, the outcries, the backlash from that will prevent it from ever actually happening. But if you have a medicare for all who wanted plan, while most people still go to their little private insurance plans, then when they start cutting back medicare for all who want it, we’re not going to speak up cause we’re fine. We got insurance through our jobs, we got other kinds of insurance. We’re good. So if they cut back this program that only affects some people. Yeah, maybe there’ll be a few, oh no, don’t do it. But we’re not really going to care when they just scale it back and weaken it and eventually destroy it and that’s why those incremental little plans don’t work guys is going to hurt. Okay. Medicare for all implementing it, putting it in place and getting on that same plan, there’s going to be hiccups is not going to be perfect. Probably not even going to be a smooth transition, but it’s like ripping off a bandaid and that bandaid is private insurance. The band aids on there because something’s horribly wrong and we’ve got to rip it off. Deal with the sting for a few seconds and we’re good to go. Buttigieg doesn’t understand that because Buttigieg wants to make everybody happy. He just wants everybody to be living in this happy, smiley world where we all get, we all along and corporations don’t take advantage of people, but that’s not the world that we live in. And we can address a fantasy. We have to deal with the reality. And I don’t think Mayor Pete is up to the job.