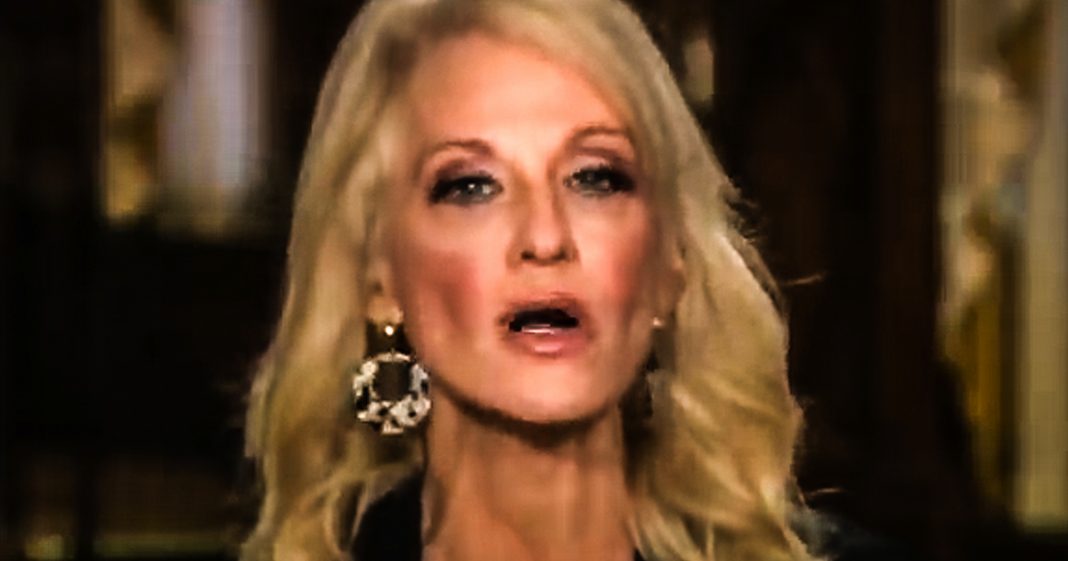 During an appearance on Fox News Sunday, Kellyanne Conway claimed that the Democrats have neither a legal nor Constitutional basis for embarrassing the President. The last time we checked, the Constitution doesn’t say anything about not embarrassing the President, but Conway doesn’t seem like she’s someone who actually understands what’s in that document. Ring of Fire’s Farron Cousins discusses this.

Kellyanne Conway is many things but a legal scholar. She certainly is not. This past weekend during an appearance on Fox News, Sunway, ah, Sunday, Kellyanne Conway made the following statement about what is apparently, at least according to her in the constitution, here it is,
[tear on impeachment. What does he think about those in the house pursuing it? Complete nonsense. Even Jerry now said, oh impeachment is just a term. This is a process. They can’t even, they need to get a messaging meeting and they need to read the constitution. The Democratic Party are we seeing American? The congress work for you. They work for you and they’re wasting your money and their time on trying to impeach a president where there are no high crimes and misdemeanors. They thought the Mueller report would be the end all. They even had Bob Muller come and talk about the Muller important. It was a disaster. So they work for you. Tell them to vote on the US MCA, get that trade deal done. Tell them drug pricing, infrastructure, keep this great economy humming along and stop the nonsense of harassing and embarrassing this president. And the people around him when you have no constitutional or legal basis to do so.]
So I guess there you have it folks. The Democrats are kind of up a creek at this point because according to Kellyanne Conway, it is unconstitutional to embarrass the president of the United States. Uh, you can’t harass him. You can’t embarrass him, you can’t launch investigations. Cause Kellyanne Conway says all of that is anti-constitution. Now, if Kellyanne Conway would actually take the time to read the US constitution, she would understand that we do have a system of checks and balances and that the US congress does have a responsibility to the American public to hold the president of the United States accountable when necessary. If it embarrassed him, oh well there is no a clause that says, oh, you can investigate if it’s going to embarrass him. That doesn’t exist. So you can carry out these investigations if it reveals horrible info. So be it kind of like with the Bill Clinton’s impeachment hearing in the nineties we didn’t need to know all of that, but we do. And for those of us who lived through it, unfortunately those, uh, words and images are burned into our brains and I’m willing to bet that that embarrassed President Bill Clinton, but at the same time, you didn’t have brain dead Democrats coming out saying, oh, it’s own constitutional to embarrass him. They talked about how ridiculous it was, sure, but never tried to claim that it was unconstitutional to be carrying out these investigations. And here’s the thing, and this is what Kellyanne Conway doesn’t seem to understand. The more she goes out there and says that these investigations should not exist, that it’s presidential harassment or that it’s unconstitutional, the more guilty it makes her boss look. So she better pray that embarrassing the president never becomes unconstitutional because she’s probably going to be the first one prosecuted under that brand new amendment that may be Republicans are in fact working on, who knows, because they’re all a little bit crazy these days. The Democrats have the authority to carry out these investigations. The Democrats have a responsibility to carry out these investigations and let the public know the truth of what’s going on. And again, if it happens to embarrass the president and the process, maybe he should have thought about that one before he decided to run for president, but more importantly, number two, before he did the really bad things, that would be embarrassing if anybody ever found out about them.