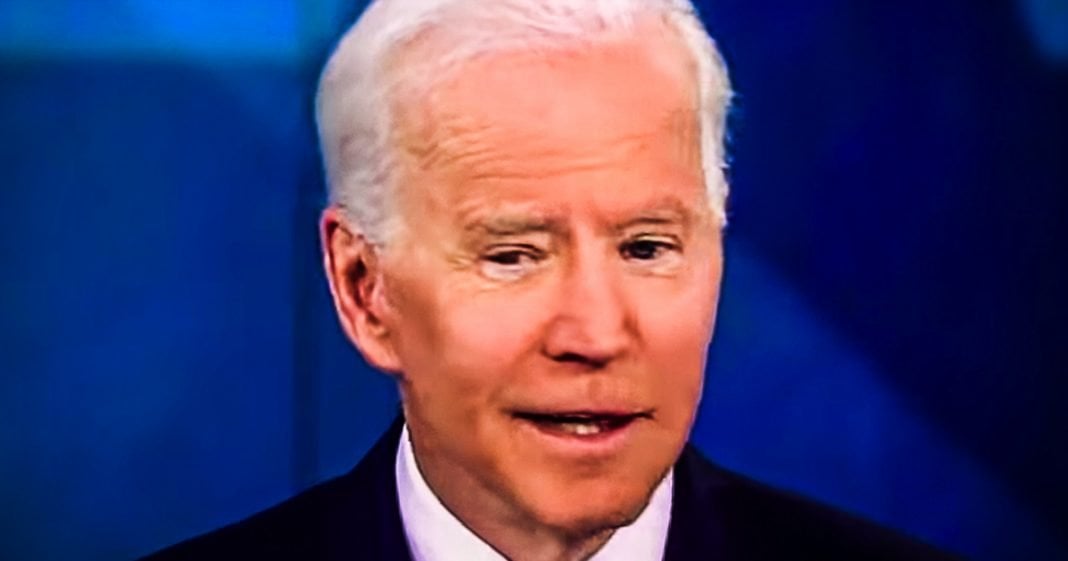 Joe Biden thinks that drug companies are super, except for the ones out there killing Americans. But other than their death toll, Biden sees no problem with these companies who are ripping off American consumers and lying about why they keep our prices so high. Biden appeared to buy into Pharma’s lies, and Ring of Fire’s Farron Cousins explains how dangerous that is.

*This transcript was generated by a third-party transcription software company, so please excuse any typos.
This past weekend, former vice president Joe Biden, attended a high dollar fundraiser at the Dallas home of a, a cranio facial, uh, surgeon, if I pronounce that correctly. Uh, Dr. David, Jennacove. And while Biden was at this high dollar fundraiser, he made the following statement. He said, by the way, great drug companies out there except a couple opioid outfits, you know, cause Joe Biden, like the rest of his, we, we don’t like drug companies that are just pushing pills, pulling in billions of dollars, killing American citizens. But other than that, according to Joe Biden, Big Pharma is totally cool. They’re great. And he believes they’re great because they’re out there doing this research and curing diseases and making advancements and keeping us all healthy and safe and wonderful. And that is a phenomenal myth, right? I mean, if we could believe in that, it would be nothing but sunshine and puppies and rainbows. But that’s not what happens here in the United States. Joe Biden story is a lie. Big Pharma is not out there doing all this research and curing diseases and making people’s lives better. Technically, that’s the federal government. They’re the ones who are funding this research. And then for the 84% that the government funds, you’ve got the other 16% maybe that’s coming from the pharmaceutical companies, right? Actually, no, the majority of that remaining 16% comes from charitable organizations. So they’re paying most of that 60% but surely the remaining couple of percentage points that totally has to come from drug companies, right? Well, sure. Some of it does a little bit of it, but here’s the thing. According to recent public citizen analysis, drug companies themselves typically spend about $160 million developing a new drug and they make that back in a matter of days, days, not weeks, not months, not years, days. It only takes them days to make back the money that they actually spent on these drugs. So you would think then, maybe after, you know, 14 days, how, let’s give him 60 days, maybe after 60 days they released a reduced the prices of these drugs. Nope. And you know why? Because of the hundreds of millions of dollars a year that these drug companies spend on advertisements and lobbying and part of the lobbying was one to make sure they, they’re able to advertise these drugs and two, to make sure that we do nothing about the rising cost of prescription drugs here in the United States. That’s where the money is folks. That’s where they’re spending it all. Remember that next time you go in to get a prescription refilled and you have to pay $400 for an asthma inhaler? Yeah. Most of that is going to be used to pay off a politician to vote, to not reduce the price of that inhaler. Next time you gotta to pick up an Epi pen and you pay $650 for it, most of that money is going to be spent crafting a wonderful new ad about how awesome pharmaceutical companies are. Some of it’s going to be spent on lobbying, some of it’s going to be spent on these front groups out there fighting Medicare for all. That’s where the money’s going because we’re funding the drug research, not the drug companies. So Biden at this big dollar fundraisers out there pushing big Pharma’s lies for them and he has to know their lies. There is no way any rational thinking person left in this country right now thinks that drug companies actually pay for the R and D because they don’t. We’re paying for it and then we’re paying even higher prices when we go to pick up those prescriptions because drug companies have to keep paying off the politicians so they can keep price gouging us so they can spread propaganda telling us that that money is used to, you know, develop new drugs. It ain’t true. The federal government’s paying for roughly 84% through the National Institute of Health for the drugs that we use between the years 2010 and 2016 210 new drugs were approved here in the United States. 100% of the funding for those 210 new drugs came from the National Institute of Health. Six years. Pharma didn’t have to pay a dime for those 210 new drugs that got approved, but you can bet they’re charging us astronomical markups for those same drugs that quite literally cost them nothing.