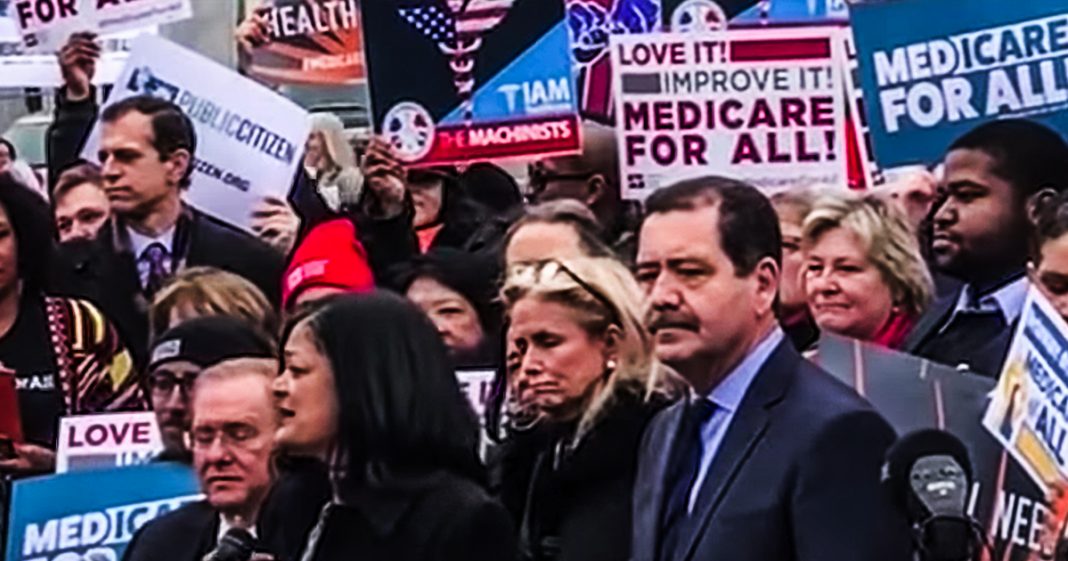 According to a new poll, the majority of small business owners in the United States believe that Medicare For All would be great for this country because it would reduce their overhead costs and take things like health insurance off their plates. This is the argument that needs to start being made by proponents of the system, as businesses stand to save A LOT of money under this plan. Ring of Fire’s Farron Cousins discusses this.

*This transcript was generated by a third-party transcription software company, so please excuse any typos.
Medicare for all is still hugely popular here in the United States. And according to a new poll, there is another group of people here in the United States that now a majority of them say they support the idea of medicare for all. And those people happen to be small business owners according to a new report, a new poll, excuse me, 58% of small business owners here in the United States say they support Medicare for all because it’s going to lower costs for them. It’s gonna lower their overhead costs. And here’s why big corporations or even just larger companies do have the ability to hire human resources. People maybe even hire an outside consultant to go out there and negotiate insurance plans with insurance companies, smaller businesses. Maybe you’re just a, a local, a Bodega at the end of the street, you don’t have that benefit because you don’t have that luxury of being able to afford those things. So you’re kind of stuck. You and your employees with whatever plan they have to offer, you can’t negotiate. Prices so you end up, getting screwed pretty hard and they’re tired of it.
And they want Medicare for all because then not only does it save them money, it’s also now something they don’t ever have to worry about
and that is the argument that needs to be made more frequently. It even needs to be made for the corporations. Those who do go out there and negotiate prices, you’re still paying too much and you will be paying less under Medicare for all. It puts more money into the pockets of the corporations. And I know we do most of our reporting here on ring of fire talking about how horrible corporations are and they are. They also hold a lot of power. So what if we just reframe the argument slightly. What if we start telling them how much money they’re going to save, how many more super yachts they get to buy if they no longer have to pay for their employees healthcare coverage. I think about some of these massive corporations here in the United States, you know AT&T springs to mind. We’ve got an office right down the street. I see it all the time. That’s why it springs to mind. But AT&T nationwide, thousands upon thousands, hundreds of thousands of employees. Most of them have health insurance in AT&T like other employers pays for that. So how much money are they going to be putting in their pockets if suddenly that’s something they don’t have to pay for?
They don’t have to have administrators. So those people can free up their time and work on other things for the company. You save money all around and that’s the argument that needs to be made. We know as a public that we save a ton of money with it. Yeah, our taxes are going to go up, but we’re no longer paying insurance premiums. So overall more money goes in our pockets, but the corporations, the ones out there calling the shots, they need to be told that, hey, guess what? Yeah, you suck as a corporation, but this puts more money in your pocket too. You save money and health care becomes something you never have to worry about for your employees. Again, whether it’s somebody working minimum wage part time or a full time executive, you don’t have to cover them at all or ever even think about giving them health care because we got it covered. That is the argument that needs to be made.