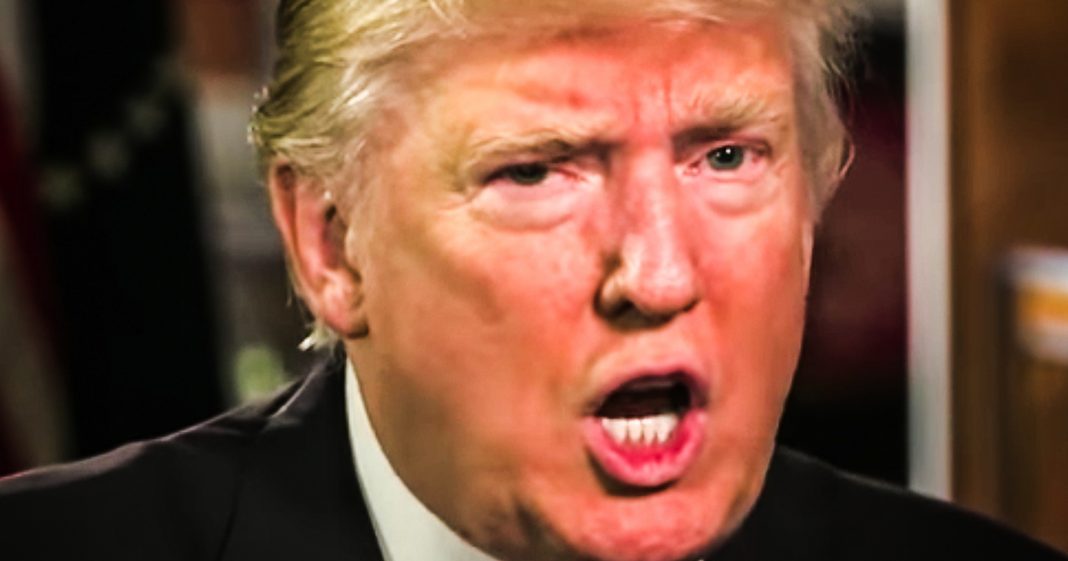 Donald Trump loves to rant about “fake news,” but the REAL fake news outlets out there might be the only thing keeping him in the 2020 Presidential race. Studies have shown that Republicans are less likely to approve of Trump when they don’t consume fake news from right wing websites, so fake news really is the only thing keeping this presidency alive. Ring of Fire’s Farron Cousins discusses this.

*This transcript was generated by a third-party transcription software company, so please excuse any typos.
Every few days, maybe every week or so. Donald Trump likes to get on Twitter and tell us that if it were not for the fake news, his poll numbers would be so much higher. The truth is that if it weren’t for the fake news, Donald Trump’s poll numbers would be so much lower and believe it or not, folks, there is actually a little bit of research available to back up that claim I just made. And that research came from the Washington Post. Now, Washington Post, as we all know, is owned by Amazon and Amazon was working on a kind of new little news research feature. So Washington Post decided to run an experiment, uh, with people throughout the United States. They took Trump supporters, they took non Trump supporters, Republicans, democrats, Libertarians took a whole big group of, uh, people and they use this new Amazon service to make sure that these people were only fed certain news stories. Now they were kind of broken up by researchers, not that the participants knew this, they were broken up into groups. Some of them received just regular news of the day. Others received news of the day, minus a lot of the damning headlines about Donald Trump. And this experiment, by the way, took place in, uh, June of 2017 shortly after Komi was fired and Robert Mueller was appointed, but
the Republicans who were fed stories that did not include all of the Trump, Russia, Trump, Comi, Trump, Mueller stuff consistently.
Had a favorability rating of Donald Trump that was roughly seven points higher than those who read all of the news, even if they just read the headline. Furthermore, those who did get to read the damaging stories about Donald Trump, the truth, essentially about what was happening at the time, they’re overall goodwill towards Trump. Their positive feeling about him dropped by almost 11 points. So the people who got to see real news and see what was happening on every, you know, from day to day, even though they were Republicans, they said, yeah, I don’t like this guy as much now. But those who didn’t see those stories were just as happy as ever with Donald Trump. And that’s where the fake news thing comes in. Oh, and by the way, the shift in opinions only happened with Republicans. I thought that was a very interesting finding of this little study they did. Democrats,
their views didn’t change based on the news of the day, but Republican’s simply reading a headline that was enough to just change their opinion of everything. Wow. Which side is more pliable? And it also kind of tells you everything you need to know about Republican politics. They don’t need to read the story. They don’t need to see the facts. They see a headline. They think it’s true. Wow, that’s terrifying. And that’s the point. It’s terrifying because Donald Trump still has a fairly high approval rating among Republicans, but Republicans aren’t out there everyday scouring a, you know, the Washington Post and the New York Times or you know, any progressive news site. They’re out there reading Breitbart, they’re reading the daily caller, the daily wire, the daily idiot, whatever the latest one is of the day. And they’re watching Fox News. They’re watching these news outlets that whitewash these stories about Donald Trump that completely fabricate stories about progressive’s. They lie about the issues and Republicans take it at face value. But if those outlets didn’t exist, Donald Trump would not exist. His approval rating wouldn’t be 38% it would probably be closer to 8%
the fake news right now is the only thing propping up Donald Trump. And obviously we can’t ban the fake news. They have a right to be out there saying these horribly stupid, misleading things. So how do we counter it? Well, we counter it with facts. We counter it by amplifying our voices. We amplify it by sharing these stories, by putting them out there in the ether, by engaging in competent debate with people who can be shifted with people who can see the light. As I’ve repeatedly said, do not waste your time on people who refuse to accept reality. They’re a lost cause. But most of these folks are not. And those are the people we need to reach. And those are the people we need to share these stories with. And those are the people we need to have conversations with because they are open to different experiences and different information. They just, in many cases, have to be shown how to do that.