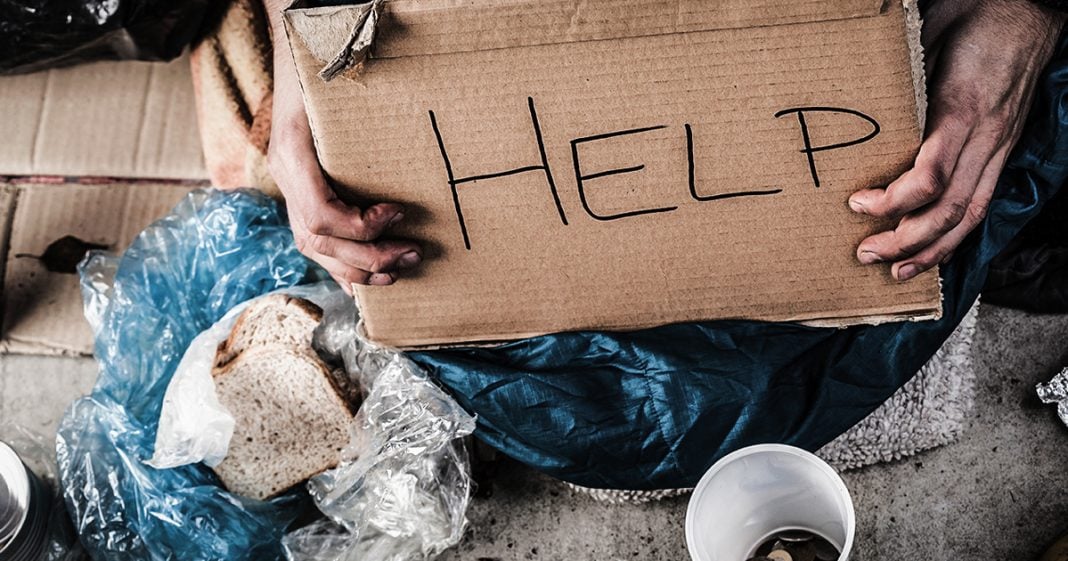 Church leaders in California have been arrested for allegedly imprisoning homeless people at their buildings and forcing them to do manual labor for the church. Homeless abuse is all too common in the United States, but it is even more surprising coming from a religious institution (or at least, it SHOULD be more surprising.) Ring of Fire’s Farron Cousins discusses this.

*This transcript was generated by a third-party transcription software company, so please excuse any typos.
Well, here’s a disgusting story that emerged this week. 12 individuals from the imperial valley ministries, a church, a series of churches, really a nondenominational one out in California. uh 12 members officials from this church were arrested this week on charges that include conspiracy, forced labor, document’s servitude, and benefits fraud. Here’s what was happening at these churches. They were taking homeless people. Uh, they claimed that their specialty was, you know, rehabilitating drug addicts who were homeless. They would bring them into the church and say, Hey, you know, you need a nice warm bed. You need a nice good meal. We’re going to give you those things. Hand over all your documents. You know, your, your, your passport. If you have one, probably don’t your driver’s license, a social security card. You got to give us all your documentation so that we have that. That’s ours. Now, also a, by the way, you got to sign over your benefits. If you’re getting welfare or food stamps, you have to give those to us and we’re just going to pocket those. Uh, also, by the way, uh, you’re gonna have to go outside and panhandle for nine hours a day and then you have to turn that money over to us. That’s our money now. Oh, one more thing. We’re locking you in here and you can’t escape.
They literally turn these homeless people into slaves, slaves whose job it was to go out there every day with a little cup, collect as much money as they possibly could, possibly collect, bring it back to the church and dumped the cup out for the church.
This was modern day slavery and these people couldn’t leave again because the church had their documents, social security cards, id cards, whatever it was. The church kept those and kept them locked. And then when the people came back to the church, the homeless folks, they deadbolted them in there from the outside so that they couldn’t escape. And the reason, one of the reasons we know this was happening was because two people did escape. You had, uh, two of the victims managed to escape the indictment. States. One was a 17 year old who broke a window and ran to a neighboring property to call police. Second was a woman suffering from diabetes who was allegedly refused medical care. That’s what was happening at these little ministries out there in the state of California. Why? Because we do a horrible job here in the United States, have taken care of our homeless population.
That’s the bottom line. That’s what the story is really about. It’s not just about the disgusting actions of these ministries out there in California. It’s about the country as a whole. Homeless people are typically the victims of abuse, whether it’s financial abuse, you know, maybe it’s physical abuse, whatever it is. We don’t protect them as a country. We see them on the street corners and we just pass by, and I’m not just talking about average commuters, I’m talking about the politicians as well. They’re doing nothing right now to help these people, and more importantly, to protect these people for allegedly being the richest nation on the planet. We sure do like to turn our backs on those who need help because they’re living in abject poverty. That’s not what the richest nation on the planet should be doing. You know, for a nation that likes to tout its alleged Christian values, we sure aren’t living up to anything that the Bible actually talked about at this point. We should all be ashamed. Even those of us who aren’t out there trying to claim it’s a Christian nation.
we’re still all hypocrites and we all collectively have to do better. These are human beings. They’re not statistics. It’s not some gross bum you see on the side of the street. That’s a human being. Human beings with children, human beings, with parents, with siblings, siblings and parents and kids who may not have heard from them in years. They don’t know where the next meal is going to come from. They don’t know where they’re going to sleep that night, and they’re sitting there praying that they don’t fall victim to abuse because it’s become far too common. Because again, collectively as a country, we’re doing absolutely nothing to help these people, and that’s a damn shame.