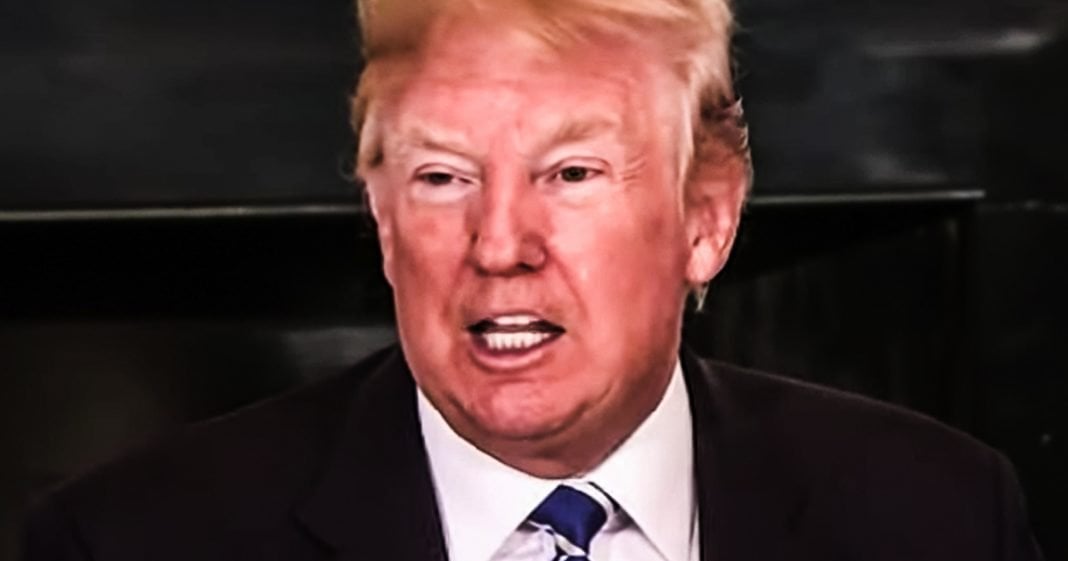 Donald Trump has been warning his advisors and aides for quite some time now that running against “socialism” in 2020 is not going to be easy, according to a new report in The Daily Beast. And he’s absolutely right. Most people understand that the word “socialism” isn’t an accurate descriptor for the policies Democrats are pushing, and those who think it is couldn’t define the word if they were asked. People need help, and that is what some Democrats are offering. Ring of Fire’s Farron Cousins discusses this.

*This transcript was generated by a third-party transcription software company, so please excuse any typos.
Republicans, including Donald Trump, love to tell us that socialism is the root of all evil. If we enact socialism here in the United States, it will effectively destroy our country. That’s what they’re telling us publicly. They’re saying, you want to be Venezuela because this is how you get Venezuela here in the United States. You stay away from that socialism except behind closed doors according to a new report by the daily beast where Donald Trump has been warning his advisors and his friends and fellow Republicans, that the fee and his donors, that defeating socialism in 2020 is going to be exceptionally difficult according to people that spoke with the daily beast who have been in attendance at these meetings where Donald Trump has issued this warning. They said that the president views socialism as a very real threat to his administration and his reelection because of its broad populist appeal. And if in fact the president did make that intelligent statement, which is suspect to begin with, um, he’s right.
If he did say it, whoever said it, they are right because yes, socialism, democratic socialism to be more precise is hugely popular here in the United States, and I’m not even talking about the plans that have been proposed by the candidates running for president on the democratic side. I’m talking about what we have right now. We have it right now, folks, social security, Medicare, Medicaid, snap, it’s democratic socialism. That’s where that came from and those programs work pretty damn well. They do a good job of protecting people from falling flat on their faces and then becoming a massive burden on society. They allow the elderly to retire a little bit of peace, you know? Yes. A lot of them too. Many of them still have to take on some kind of part time employment, but they’re at least not grinding away on a factory floor until the day they dropped dead.
Social Security tries to cushion them a little bit. Same thing with Medicare may not cover everything for these folks, but it does a dang good job of covering what they need and all we’re saying is let’s take it further. Let’s take that Medicare that they have and expand it. Not just expand it to cover everybody, but expand what it covers and what it covers would be everything and who it covers would be everyone. That’s the plan. That’s the goal. And when you start breaking it down like that, suddenly that claim of socialism isn’t so scary to the American public, including Republicans who when you explain to them what it is, overwhelmingly support it. But when you say, do you want socialized medicine? They say, Eh, no thanks. Socialism eww Venezuela. That’s their argument for everything with socialism. They say Venezuela to it and that’s why I bring that up because it’s such a ridiculous statement here in the United States.
We want Democratic Socialism. We’re not going full blown socialism. We’re not going full blown communism. We’re not seizing the means of production. We’re just saying, hey, what if we did a crazy thing and took care of all of our citizens like most other industrialized countries do. Thats, that’s what we’re saying. And for the most part, rational thinking, American citizens understand that. And for the most part, rational thinking. American citizens aren’t out there clinging to their blue cross blue shield policy papers saying, but no, I love my private insurance. Those people don’t exist. They truly don’t exist. Oh sure. Maybe you could find one or two out there. The rare Unicorn who loves their private health insurance. Well fantastic for you, but we’re not gonna let one, two, three, or even a hundred people who love their health insurance ruin it for the rest of us because people in this country are quite literally dying because they don’t have health insurance coverage. And we’re going to fix that. And Trump understands that. And his party understands that, that they can’t keep being the boy who cried socialism when all we’re actually trying to do is give people a better life, a better chance, something less to worry about. The public understands it and the Republicans behind closed doors understand it and they know that if they come out here and run on anything that’s not going to give everybody in this country healthcare coverage their chances in 2020 drop down to zero.