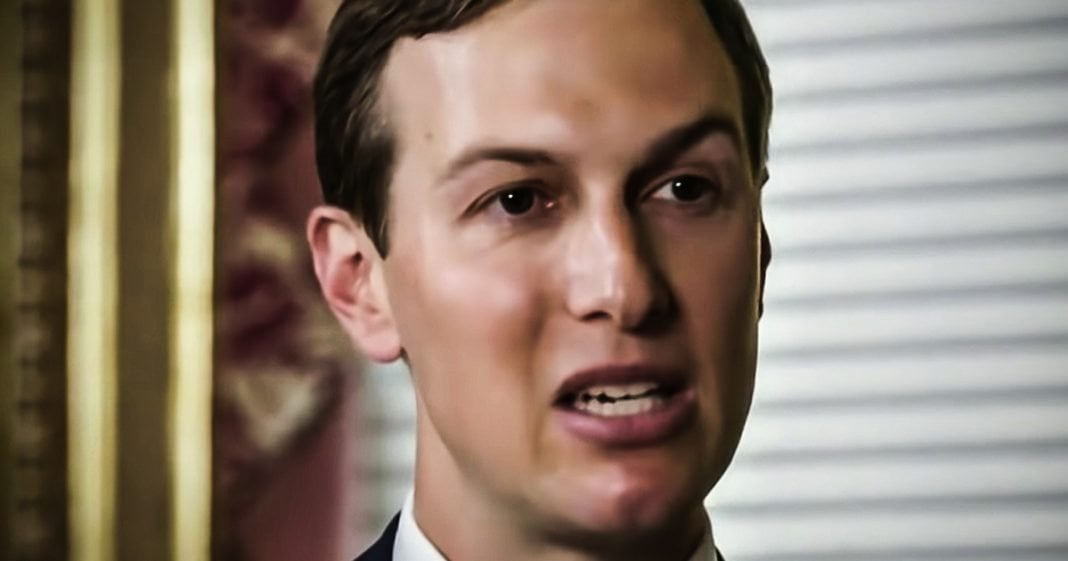 According to reports, Donald Trump suffered a meltdown in the Oval Office when he learned that Jared Kushner had been using his private email for official government business, the same thing that Trump’s crowds still want Hillary Clinton thrown in prison for doing. Trump’s advisors and cabinet members have a lot of baggage with them, even more so than the Democrats they claim are criminals. Ring of Fire’s Farron Cousins discusses this.

*This transcript was generated by a third-party transcription software company, so please excuse any typos.
So earlier this week, there was a bombshell piece in the Atlantic by McKay Coppins kind of detailing all of the kind of nasty behind the scenes stuff happening with the Trump White House with a particular focus on the Trump kids. Well, there’s another story out of that McKay Coppins piece that I think a warrants a little bit further discussion. And this one involves Jared Kushner and Ivanka Trump. According to McKay Coppins and the people that McKay talked to inside the White House for this particular story, Jared Kushner. And to an extent, Ivanka calls Donald Trump to suffer a severe meltdown of pure anger in the Oval Office. When Trump heard the news that Jared Cushner had been using a private messaging app for official government business, according to McKay Coppins, this is actually what Donald Trump said, according to a White House official, when he learned the news, how could he be so stupid? That’s what Hillary did. And that’s what all of us have been saying since that news came out, not just the, how could he be so stupid?
We totally expect Jared Cushner to always do stupid things. But seriously at Trump’s rallies, still the ones this week, they start chanting, lock her up regarding Hillary Clinton’s use of private email, and Jared Kushner has done the same thing. Ivanka Trump has done the same thing. More than half a dozen other members of the Trump administration have been doing the same thing. So where are those chants? Where’s the lock him up, lock her up, lock the other eight people up as well. Maybe that’s not as catchy. It’s just a simple lock her up. But that’s the reality we’re facing. What’s good for the goose. Right. And that’s exactly what’s happening inside of this administration. Now I do feel for Donald Trump a little bit. Yeah, because he didn’t know that Jared Cushner was this stupid, which is kind of shocking because those of us who’ve, who’ve seen the man in action, you know a lot more than, or a lot less excuse me, than Donald Trump has.
Hell, he knew this guy very well and didn’t know he was an idiot. The rest of us could pretty much tell right off the bat. And then everything Cushner has done since coming into the public’s eye has proved it even further. Oh. But the story gets a little more interesting now too, because according to Coppins, the president has also complained that Ivanka could have married New England patriots quarterback Tom Brady instead of his current son-in-law. So Trump’s meltdown over Jared Cushner was so intense that he was pissed off that Ivanka chose to marry this creep instead of six times Superbowl winner, Tom Brady, as we all know, Brady was photographed at one time with a make America great again hat at an in his locker at a stadium. So yeah, Trump’s a little disappointed in his son in law. A little disappointed in his daughter for her choice. But overall, that kind of underscores the bigger problem here.
And that is the fact that yes, we have members of the Trump administration regularly breaking the law and not one of them has ever been held accountable for doing it. Hillary Clinton was investigated for years and then it was determined that she did nothing wrong. I know the House of Representatives right now is attempting to investigate both Jared Kushner’s private to messaging and Ivanka Trump’s, but their lawyers are trying to stall that, trying to delay it, trying to block it, but that’s only going to work for so long. Hillary Clinton rightfully went through a hell of a lot for her use of private emails. It’s only fair that the Trump administration go through the same.