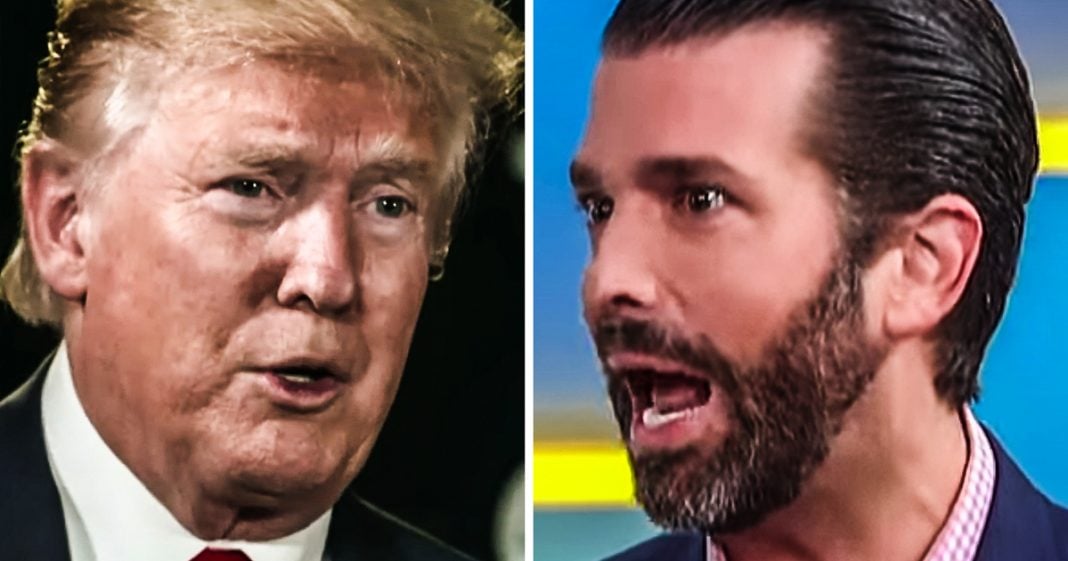 According to McKay Coppins at The Atlantic, Donald Trump regularly trashes his own son, Don Jr., when he appears on Fox News because the President thinks his son doesn’t know what he’s talking about. Conversely, the President also heaps tons of praise on Ivanka when she goes on the network, furthering the schism between the two siblings. Ring of Fire’s Farron Cousins discusses this.

*This transcript was generated by a third-party transcription software company, so please excuse any typos.
Mackay carbons from the Atlantic is not done dishing out all the dirt that the Trump administration has to offer, especially when it comes to Donald Trump’s relationship with his children. Don Jr and Ivanka now Coppins had already reported not that long ago, that there’s this in-fight brewing civil war really between Ivanka and Donald Trump, jr where each of them are accusing the other one of planning negative stories about them in the media, and they’ve been doing that now for almost three years, but also included in McKay. Coppins reporting is a report from a former White House aide who said that Donald Trump, who spends all day watching Fox News, anytime Ivanka would go on the network, would lavish her with praise. Talk about what an amazing job she did and how great Ivanka Trump truly is for the world. Meanwhile, his son Don Jr, who goes on Fox News a heck of a lot more than Ivanka ever could dream of, doesn’t exactly get that same kind of treatment.
In fact, many times Donald Trump, according to this former staffer who was there, is quite hard on his Trump and thinks he’s an idiot through most of his appearances. In fact, according to the aid, Trump was quoted as saying, why did he say that? He doesn’t know what he’s doing on multiple different occasions. So Trump who allegedly loves his children also happens to think they’re idiots, or at least one of them is an idiot. The other just married an idiot according to Coppins early reporting from earlier this week. But here’s the thing, competence is also quick to point out, and I think the aide also pointed out that a Coppin spoke to Trump also sees Trump jr as very useful. He sees his value on the campaign trail, but more importantly, he sees him as the heir to the Trump political dynasty. And that tells us everything we need to know about this feud, right?
Because Ivanka Trump, even according to don, Jr himself has always been the favorite. She has been the favorite child of Donald Trump, sometimes to a very creepy extent, but Trump jr is still the heir apparent, not just to the Trump family corporation, but to the Trump political dynasty that this family is trying to create here in the United States. Now, Trump jr may not have all of the charisma of his dad, but he’s getting there and that’s what is worrisome. If he were to run for office right now, or even in 2024 I don’t think it’s going to happen for him. I just don’t. But he’s being coached. He does have advisors. He’s going out there on Fox News and play in it up to the Republican base there. But the x factor is the damage that his father has caused. See George W. Bush, whose daddy was also president, but his dad didn’t do all these horrible things.
Right. And we didn’t have Twitter back then. We didn’t have the Internet back then. So a lot of the horrible things from the Bush senior administration, if you didn’t tune in to 60 minutes each week, you didn’t hear about it. So he did do really bad things. Don’t get me wrong about that, but we just didn’t hear about him. You’ve got to go back and read those in the history books. So by the time W came along and ran for office, he didn’t necessarily have to deal with all the baggage from his dad during the election. Trump jr doesn’t have that benefit and that is going to hurt him dearly. No matter how much he gets coached up, no matter how many advisors he hires, he’s never going to be able to escape the his own stigma of his name.