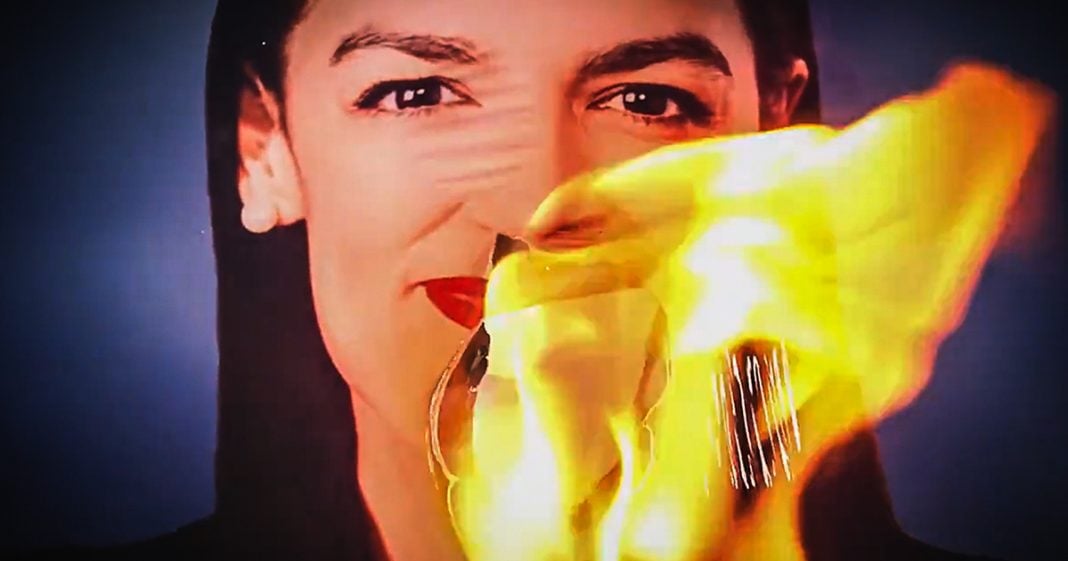 A new Republican political action committee called New Faces PAC released an ad during Thursday night’s Democratic debate where they warn about the “dangers” of socialism. During the ad, they digitally burn a picture of AOC’s face while claiming that she doesn’t understand how horrible socialism really is. The ad is beyond disgusting, and Ring of Fire’s Farron Cousins lists the names of the people responsible for this ad.

*This transcript was generated by a third-party transcription software company, so please excuse any typos.
During last night’s democratic debate, a disgusting new ad from a group called new faces GOP aired where they burned digitally burned a picture of Alexandra Kazuyo Cortez. And then the, the flames subsided and you see images of Cambodian genocide. Here’s the ad.
[This is the face of socialism and ignorance. Does Alexandra Ocasio Cortez know the horror of socialism? My father was a minutes from death in Cambodia before a forced marriage saved his life that socialism forced obedience. Starvation. Mine is a face of freedom. My skin is not white. I’m not outrageous, racist or socialist. I’m a Republican.]
So the woman speaking in that ad was Elizabeth Hang who, uh, ran for Congress last year and lost, so she is a failed political candidate who now I guess has become a spokesperson for this new faces GOP running this disgusting ad, conflating Democratic Socialism with for a full blown authoritarianism because Republicans can’t tell the difference, or at least they don’t want the public to know there’s a difference. You know, when Republicans talk about socialism, they always like to point out, you know, borderline communist countries or most cases full blown communist countries. While ignoring the fact that we’re actually talking about places like Canada, Norway, Denmark, you know the places that are at peace, the places that don’t have tons of mass murder in their history, the places that are not run by Authoritarians, they just happen to offer healthcare to all their citizens. And that’s kind of what we’re getting at here.
But Republicans don’t want you to know that. They want you to think that if you listened to AOC or if you listen to Bernie, we’re going to have killing fields. We’re going to have mountains of skulls and all kinds of horrible hell happening here on our soil in the United States. So I guess the biggest question is who in the hell is new faces GOP? Who are these people who funded this group? Where did this ad come from? And that is where our good friend open secrets come in because I’m about to tell you everybody who’s given money to this group. So let’s start. They did not exist in the 2018 cycle. This is a new group here and there are 2020 pack summary Data says total receipts are $170,000 and they have spent $139,000 so they got a little under $31,000 cash in hand. So here on open secrets.
Again folks, I’m showing you this right now because this is data everybody can access. Click on donors and let’s go through here. Um, we have, I’m not gonna name regular people’s names, although I should. I’m going to this public record and I’m going to do it. Sorry. You have James Jamison from del Mar, California who donated 25,000. Uh, Paul Martino from bullpen capital who donated 25,000. You have TOV Investments LLC who donated 25,000 EAC bold from Washoe Valley, donated 20,000 Frank Delina from Delina farms donated 15,000 Hannah Trust DTD donated 10,000 Norman Metcalf and investor donated 10,000. Andrew Saban from Saban commodities donated 10,000 a Shirley and enterprises donated 5,000 T management services incorporated, donated 5,000 Sanders properties, 5,000 a fiduciary management Inc 5,000 Precision Pharmacy LLC, 2,500 a precision civil engineering 1000 and then you got a couple other folks that gave 1000 bucks or two 50 and here’s the thing folks, I didn’t just docs anybody.
This is public record. It is openly available on open secrets.org where I just read it from. So don’t go out there conflating this with, oh my God, ring of fire. Just docs to bunch of people. No, we expose the horrible human beings who produced this horrible ad filled with lies because they don’t want people to know the truth about that. We’re trying to make their lives better. Actually. They don’t want people to know that we’re trying to make their lives better. We’re trying to help them while Republicans are trying to oppress them. So yeah, nothing wrong with calling out the people who are funding those lies. And that’s exactly what we’re going to continue to do.