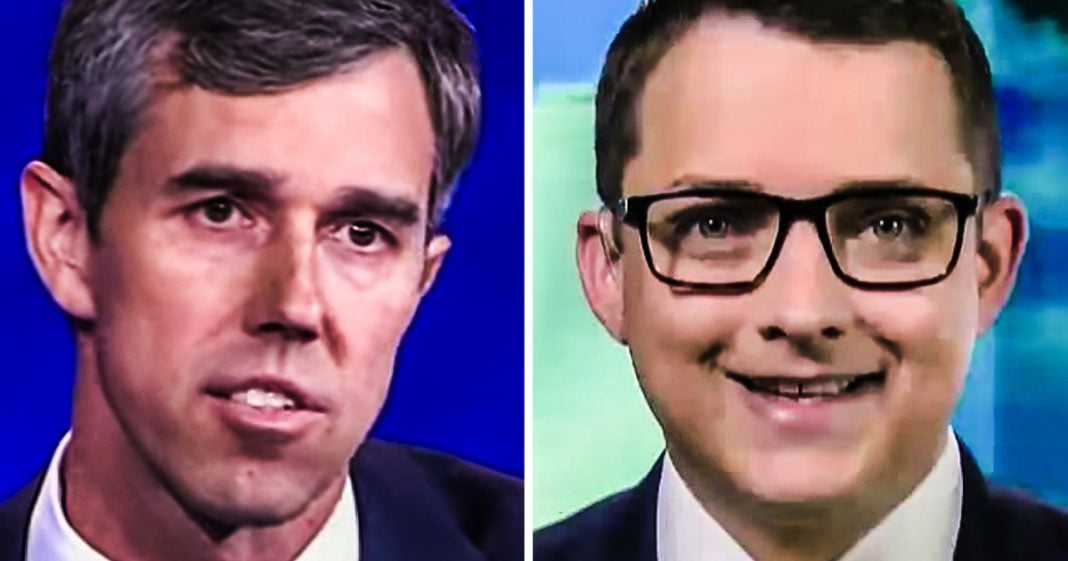 Republican Congressman Briscoe Cain attempted to hit back at Beto O’Rourke on Twitter after Beto claimed in the debate (and on Twitter) that he supports taking away AR-15s. Cain warned Beto that his “AR was ready” for him, a threat that got Cain reported to the FBI. Beto’s idea is not crazy, as just 15 years ago these weapons weren’t allowed to be in the hands of civilians. Ring of Fire’s Farron Cousins discusses this.

*This transcript was generated by a third-party transcription software company, so please excuse any typos.
During last night’s Democratic presidential debate and then subsequently on Twitter, a candidate Beto O’Rourke said that, hell yeah, we’re going to take away your AR-15s in your AK 47s and pretty much any weapon of war that doesn’t belong on American streets. Now, this is a good idea and I wholeheartedly support this plan, but unfortunately there are some folks in this country who don’t support it. One of them happens to be Texas state representative Briscoe Cain, who is by chance a republican and Briscoe Cain didn’t take too kindly to Beto his promise that we’re going to take the weapons of war off the streets. Any tweeted out, my AR is ready for you, Robert Francis. So Briscoe Cain, based on that tweet was apparently threatening. Beto O’Rourke with an AR-15
Now this tweet from Briscoe Cain, which is about the most Texas name, you can come up with uh as been reported to the FBI as a threat because it’s a threat. My AR is ready for ya. That’s a threat that is absolutely 100% a threat and Beto O’Rourke actually responded very tastefully. He said, uh, that Cains tweet was a death threat. Adding quote, clearly you shouldn’t own an AR 15 and neither should anyone else.
Beto handled it with a little more taste than, uh, you know, I would have at that time, and I do applaud Beto for his response there because it is spot on accurate. But let’s go back in time a little bit, right? Maybe 15 years, not even 15 years when we actually had an assault weapons ban here in the United States, the weapons that Beto O’Rourke is saying, we’re going to come around and take 15 years ago you weren’t allowed to own those things. So this is not some kind of radical gun grabbing plan that Beto O’Rourke has, it’s just taking us to what it used to be here in the United States. And that’s not crazy when we look at the mass shootings that happened in this country. Not all of them are happening with these automatic or semiautomatic weapons, but the deadliest ones are, and there’s no reason why these weapons should be on our streets.
You don’t use them to hunt. You shouldn’t use them to hunt. And if you need an AR 15 to protect you and your family, then you may want to look at your personal choices and why you’ve pissed off so many people in your life that an AR 15 is the only thing that can protect you from your family. And if you’re one of those types who stockpiles these weapons in case you know the government comes for and AR 15 is also not going to stop a tank, it’s not going to stop a jet. It’s not going to stop a missile or a bomb or the entire United States military. Therefore all of the arguments as to why these weapons should be here on our streets are complete trash as are most of the people who are making them get them off the streets. You want to go hunting there shotguns for that. You want to protect your family. There’s hand guns for that if that’s the route you want to go. But something that’s capable and designed to just kill as many human beings as possible and as short a time as possible. Those don’t belong on our streets. And a majority of people in this country agree on that point.