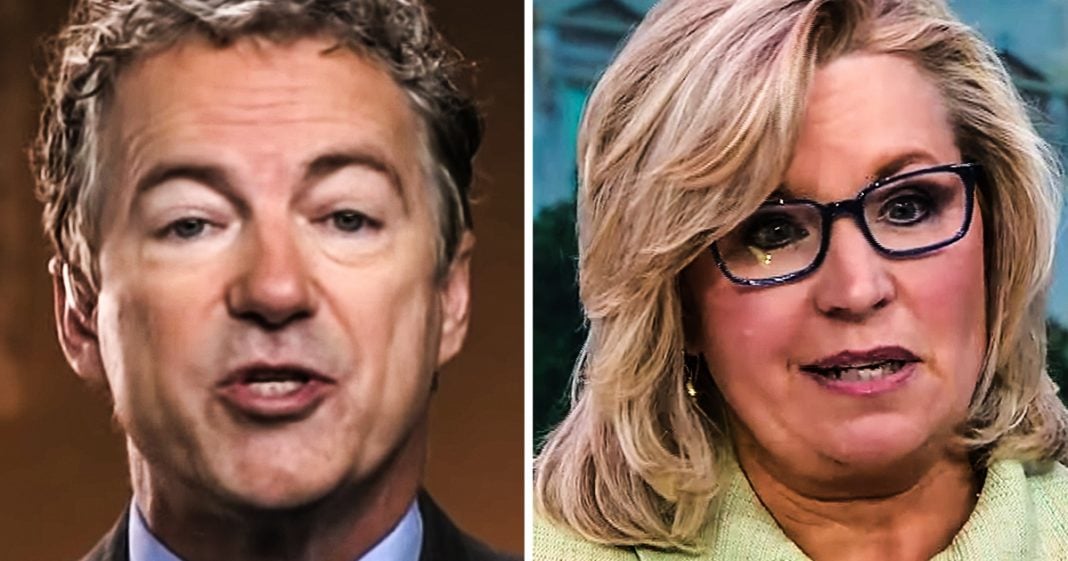 Republican lightweights Liz Cheney and Rand Paul have been engaging in a Twitter feud for the past few days, arguing over which one really supports Trump and who Trump loves the most out of the two. It is a sickening display for these adults, but it has come to represent the growing divide in the Republican Party. Ring of Fire’s Farron Cousins discusses this.

*This transcript was generated by a third-party transcription software company, so please excuse any typos.
For the last two days, Liz Cheney and Rand Paul have been engaged in a very weird Twitter feud that has also spilled over into interviews in the media. Uh, they’ve been fighting with one another over who stands with Trump the most and more importantly, which one of the two Donald Trump loves the most. And it all started with Rand Paul tweeting out an article calling out these old, including Liz Cheney, these old republicans who just want endless war in this war, in this war. Rand Paul tweeted out that article and said, why do some neo-cons continue to advocate for endless wars? I stand with real Donald Trump on ending wars. Let’s focused on America first, not Afghanistan. And Liz Cheney took this very personally and she responded with, I stand with real Donald Trump and our men and women in uniform who will never surrender to terrorists. Unlike Rand Paul, who seems to have forgotten that today is 9-11, I don’t think he’s forgotten, but it is weird to see Republicans, which Rand Paul’s really more of a libertarian arguing about fighting endless wars and why that’s a good thing.
In the case of Liz Cheney, and I’m sure she thinks it’s a good thing because her daddy is the one who started it. But that wasn’t the end of the Twitter food feud. But I do think it’s funny that they both know I stand with Donald Trump. No, I’m standing with Donald Trump. I am his favorite. No, Im his favorite. These are grown ass people acting like toddlers. And again, that wasn’t the end of it. Rand Paul then tweeted the next day, Hey, Liz Cheney, President Real Donald Trump. Here’s all your never Trump warmongering we all see your pro Bolton Blather. I’m just grateful for a president who, unlike you, support stopping these endless wars, and that didn’t sit well with Liz Cheney. That one really got under her skin. So she started digging through Donald Trump’s Twitter feed found one from 2015 and tweeted out the following- hi Rand Paul. I know the 2016 race was painful for you since you were such a big loser then an now with a dismal four and a half percent in Iowa.
No surprise since your motto seems to be terrorists first, America second. Here’s a throwback third, a Thursday courtesy of real Donald Trump. No truer words were ever spoken, and this is the Trump tweet that she retweeted, truly weird. Senator Rand Paul of Kentucky reminds me of a spoiled Brat without a properly functioning brain. He was terrible at debate. Oh, children, children, children, please, if you’re going to fight, do it somewhere else. Not publicly because this is just making you all look like a bunch of idiots and Donald Trump as well because a lot of us weren’t really paying attention to Donald Trump’s Twitter feed at the time. I know back then I wasn’t even following him on Twitter yet, and so I didn’t know this existed. So I guess Kudos to the warmongering Liz Cheney on that because damn she knows how to fight. Unfortunately, she is absolutely on the wrong side on this.
Rand Paul, for all of his faults which he is filled with them, doesn’t believe in spreading endless wars across the planet. That is literally the only redeeming factor about rand Paul who otherwise has a completely horrible piece of crap human being. I cannot stand him and I have zero respect for him, but I do agree with him on this particular issue. Liz Cheney, on the other hand, is quite literally wrong about 100% of things, so ran Paul being wrong about 99% of things versus Liz Cheney, wrong about a hundred percent I’m going to have to go ahead and side with Rand Paul on this one, but overall, let’s not forget that the bigger fight here is over who Donald Trump loves most, who stands with him the most, and that that is absolutely the saddest and most pathetic part of this already. Super pathetic fight.