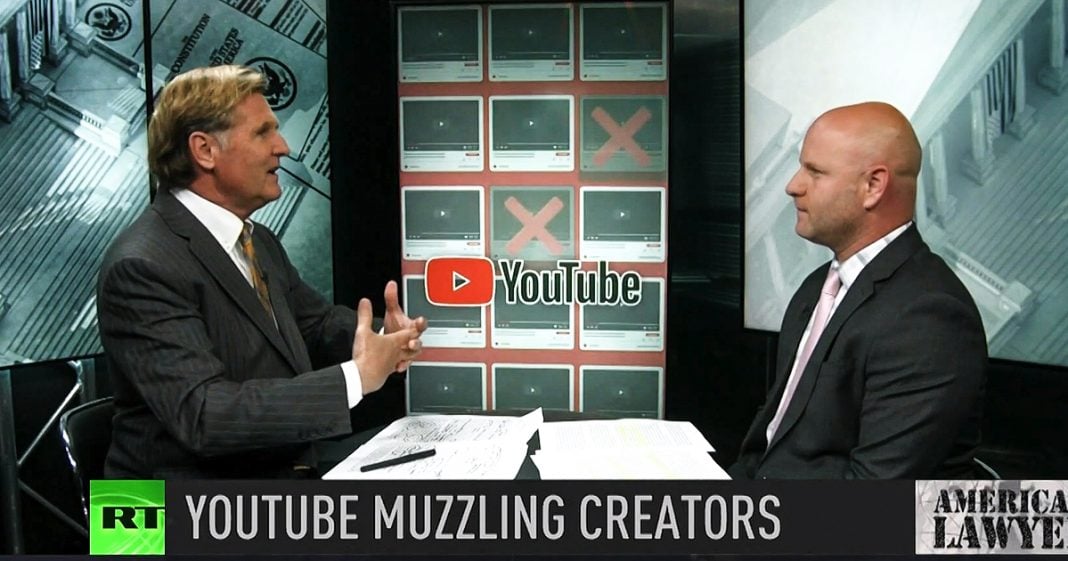 Via America’s Lawyer: Mike Papantonio and Trial Lawyer Magazine editor Farron Cousins discuss how the YouTube platform, once revered as a user-based medium for free speech, has been banning or flagging certain videos using an algorithm that hunts for ‘inflammatory’ keywords. But the algorithm’s inability to separate hate speech from social commentary has silenced many users who’d hoped to give their alternative takes on divisive issues, fueling fears of censorship by the tech giant.

Mike Papantonio:             Independent creators and media outlets are being punished by Youtube’s new algorithm shift that was supposed to filter out harmful content, but instead it appears to be promoting corporate outlets. I have Farron Cousins with trial lawyer magazine with me to talk about what’s happening. You know, Farron, it’s almost like they’re not getting the memo. It’s the folks at Youtube have not gotten the memo that their political correctness is killing independent media and now it’s being taken over by corporate media, again. MSNBC, CNN, ABC, CBS, all that money’s moving in and the independent’s are being pushed out, which is exactly why we have this system to begin with. To avoid corporate media that really has turned into nothing but a corporate glut of non-news.

Farron Cousins:                  Well, what’s interesting is, you know, Youtube for the last few years, they, they’ve struggled a lot because there is a lot of hateful, harmful content, you know, radical content out there and they want to keep it away from people. They’re not having it show up in the recommended videos. It’s not being monetized, but by doing this, they kind of painted everything with a broad brush and now you find videos that certain words, even when you’re calling out something like racism, because you said the word racism, your video’s going to get demonetized. Your video is not going to get shared as widely, even though you’re denouncing this thing that just gets caught up in this massive sweep from the algorithm. So that’s, that’s one part of it, obviously. Youtube overreacted to what has happened with the harmful content and they try, they created a giant net.

Mike Papantonio:             Okay. It’s, it, we cannot ever be completely politically correct. We have to agree with that. We can’t, there’s no way that you can have media that is always completely politically correct. So this is the best example because I could go on with a dozen story, tens of dozen stories, just like this. BreadTube, okay. BreadTube was a product where they would, they would attack right wing, crazy talk, like the crazy talk, the deniers of the Holocaust. So BreadTube comes out and tries to explain it and talks about how this is nothing more than Nazi propaganda and all of a sudden they’re flagged. Okay. And ultimately they’re taken down, they lose their right to do anything.

This is an organization that’s out there to address hate talk and they disappear. How did it happen? First of all, it happened because of these inane, ridiculous algorithms that are running right now that, oh by the way, we were even flagged one time and had to protest to come back. And our story was about the leadership in Saudi Arabia and they attacked us as if we had said something wrong. But what happened here, and it happens all the time, is they react to likes and dislikes.

That’s literally something they look at. Oh well what are the dislikes? Well, when you have right wingers coming in and saying BreadTube did something awful, that’s the first strike. And then it gets worse beyond that. This is a dysfunctional system that is now being flooded by the same corporate media that we always try to get away from.

Farron Cousins:                  Well, and the other part of that with, with the flagging of the videos is that anytime there is content that the other side doesn’t like, they can send their folks in. Everybody go down vote this video, everybody you know, report it because there’s something in it that we think is bad and Youtube kind of gives the people who flag the videos the benefit of the doubt. You know, nobody would ever lie about this. So let’s take the video down or demonetize it and then go through the review process to see if that is what happened. And it’s because they are very reactive, you know, they don’t want to take the time at first. They hope that they’ll take your video down and you won’t say anything and they move on with their day. But again, that’s just half the story too.

Mike Papantonio:             All of a sudden we see, do they want to become the same thing that that imbecilic Facebook has become? Where, oh, we’re having a birthday party. Here’s uncle Fred’s, you know, second marriage, let’s film it. All this feel good imbecilic kind of material that never tells the American public anything. I mean they could become a bunch of imbeciles if that’s what they want. And they can do that by allowing corporate media to do the same thing that they’ve done to the American public already.

Look, think about this. In 1980 there were almost 60 independent sources for news media. You know what it is now? Four, maybe some people say three, all the media in this country comes down to three, three organizations. And so, so we had Youtube because we independent news could come in, we could have a voice that got away from the pabulum that we have to listen to on the nightly news or MSNBC or CNN. We could get away from advertisers telling us what it is we’re going to listen to because that’s what happens on MSNBC.

Farron Cousins:                  Well, and when you have these, these advertisers, they’re, they’re not telling the creators what you can and cannot say. They’re telling Youtube what you can and cannot put their ads on. So Youtube and, and the studies have shown this, I think we’re at about 95% of the time in their recommended videos, it is a, what they call legacy media, which is your CNN, MSNBC, and Fox News, ABCs. So they’re suggesting that even if you’re looking at, you know, an independent journalist who did a video on their phone with their webcam, you know, saying, listen, I’m here, I’m in the field. I’m doing real reporting. And Youtube says, hey, because you liked this guy, maybe you want to watch some, some pundits duke it out on CNN.

Mike Papantonio:             And so the, the truth is that we never, because of this new algorithm and because of the new Youtube fear of being criticized, we don’t get environmental cases. We don’t get cases about corporate misconduct, about pharmaceutical companies killing the American public. Because, because on corporate media, you can’t tell stories like that because advertisers don’t let them. We don’t get stories about Wall Street misconduct or the backstory to anything. This is a disaster. Hopefully they’re going to get it under control.