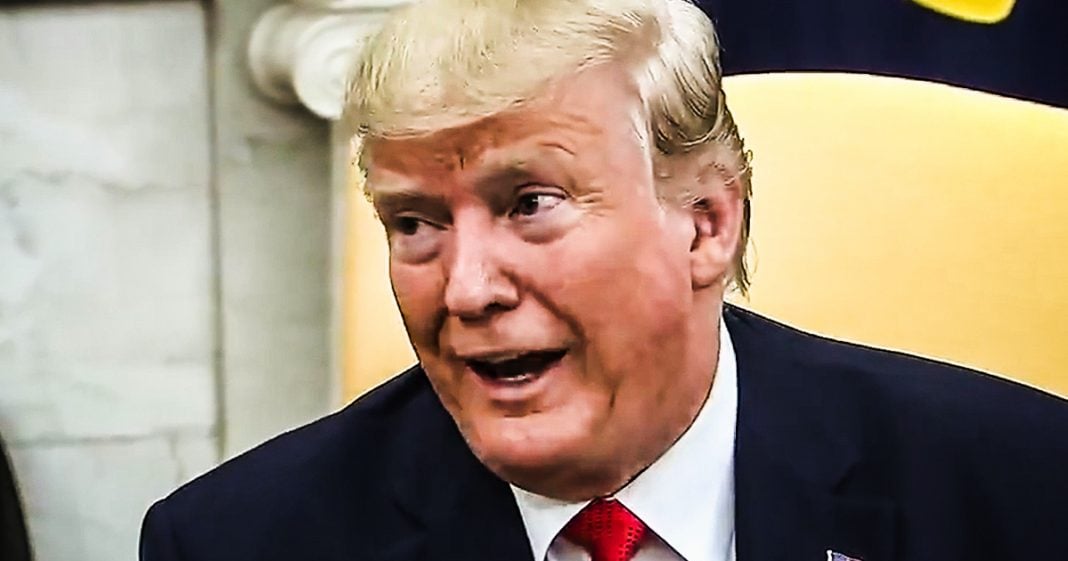 Donald Trump has announced that his administration has asked the FDA to ban flavored e-cigarettes until they can be approved by the agency. But the weirdest part happened when Trump was speaking to reporters where he appeared to forget that he has a child with Melania. Ring of Fire’s Farron Cousins discusses the proposed ban and Trump’s apparent disregard for his own son.

*This transcript was generated by a third-party transcription software company, so please excuse any typos.
So yesterday the Trump administration announced that they would be asking the FDA to look into banning flavored e cigarettes due to the fact that six people in this country have now died from a sudden illnesses related to vaping. And we’re going to get to that in a minute because that’s an absolutely ridiculous response from this administration. But first I want to focus on what Donald Trump said to the reporters when they were kind of coming up with this plan. Here is Donald Trump’s statement about why he and Melania are very passionate about this vaping issue,
[but we can’t allow people to get sick and we can’t have our youth. You still affected. And I’m hearing it. And that’s how the first lady got involved. She’s got a son together that is a, a beautiful young man and she feels very, very strongly about it. She’s seen it. We’re both reading it. A lot of people are reading it, but people are dying with vaping. So we’re looking at it very closely. And]
so you notice something odd, right? Melania has a son together. D Do you have a son together with Melania or are you saying that Melania son is, he’s all together. There’s not pieces of him elsewhere. He is all together. You could have just said we have a son. You could have even said my son. And more importantly, you also could have mentioned his name because you did kind of talk about Melania’s kid for a few seconds there, but you never mentioned his name. You never mentioned you specifically were his father. And I’m honest to God wondering if you legitimately forgot that baron was your kid or maybe you know something about Baron’s parentage that the rest of us don’t. I mean, I know you haven’t really been too involved in that kid’s life when he was just four months old. You were out there banging stormy Daniels.
So maybe you did just legitimately forget that he was in fact your son. But again, that’s just a humorous aside. We do have a very real issue to talk about here. And this is the administration’s decision, uh, to have the FDA at least temporarily ban flavored e-cigarettes, which they would be unbanned after the FDA approves them under this current plan that they’ve got, which will still take several weeks to implement if they do in fact go that route. Here’s the thing, most of the people, the 400 plus people in this country who have had these mysterious vaping illnesses, uh, it’s been the THC vapes, most of them, not the flavored e-cigarettes. So you’re banning the thing that’s not causing the problem. Second of all, it’s likely a bad batch. Why? Because regulations on e-cigarettes and e have been very lax to the point of being almost nonexistent.
Folks, if you ever have the time, and I’ve done this, goes through the FDA’s website and read the regulations that actually are in place on these e liquids and they’re almost impossible to find because they don’t really exist. Folks, you don’t know what’s going into that thing. And that’s why we had ring of fire and we’ve taken a lot of heat for it. Have warned people, hey, you don’t know exactly what’s in these things. Maybe chill out about making it your religion and people freak out because people do treat it as if it’s their religion. All we’re saying is, hey, be careful with it and that freaks people out to the point of attacking us. But we got to get onto the bigger issue here too. Right? Six people have died. We have tens of thousands of people in this country who die every single year from being shot and we can’t do anything about that. But suddenly six people die from vaping related illnesses and now we’re ready to just ban all that for good. Say, nope, we’re done. No more flavored e-cigarettes, even though that’s not even related to the people who are getting ill. You see the ridiculousness of this, right? People die in this country every day from being shot. Six people in the history of vaping have died from vaping.
And we’re only taking those six deaths seriously. Why? Well, kind of like the joker says in the dark night, you tell everybody tomorrow a truckload of soldiers is going to blow up and nobody cares. But one little mayor and everybody loses their mind. And that’s kind of where we’re at right now. All those gun deaths, those are statistics. Those are just numbers on a chart. They’re not bodies in the ground. They’re not human beings who were just living their lives to suddenly be cut down. No to Republicans. Those are statistics. But to those six people who died from these vapes, those were loving family members. Those are somebody’s kids. Those were people that we need to avenge by taking on an industry. There is an industry we need to be taking on. There are lives that need to be avenged, but we’re focusing on the wrong ones as per usual because the Trump administration loves a good distraction, and that is exactly what these e-cigarette vaping deaths have become for them.