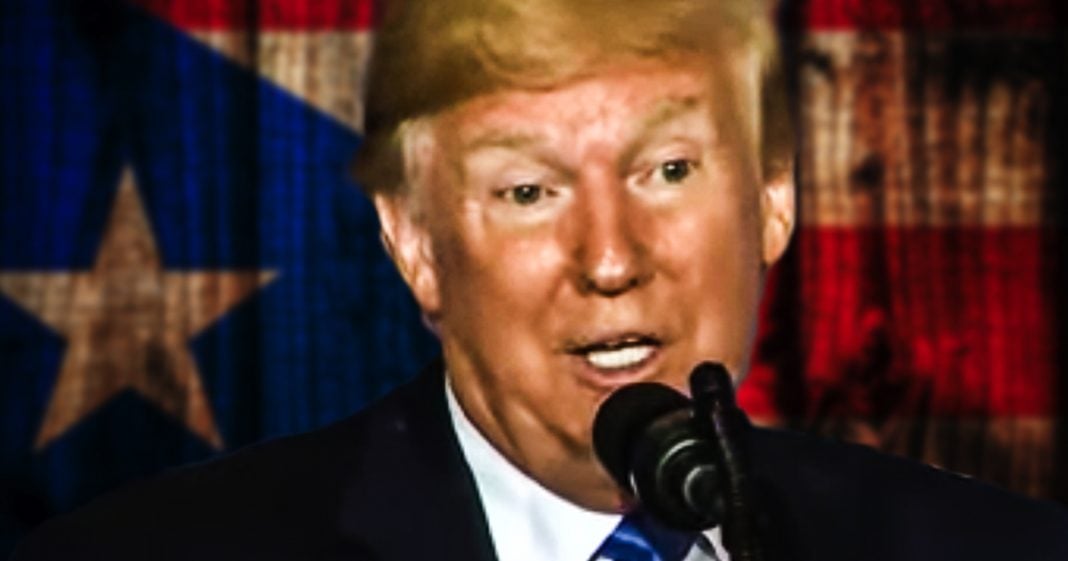 Two former officials with FEMA from the Trump administration, along with a private contractor, have been arrested on charges of fraud and bribery. These people were in charge of restoring power to Puerto Rico following Hurricane Maria, but instead they allegedly pocketed tons of cash and left the island to suffer. Ring of Fire’s Farron Cousins explains what happened.

*This transcript was generated by a third-party transcription software company, so please excuse any typos.
Donald Trump loves to tell us that the reason, the ah response to Hurricane Maria, which was almost two years ago, down in Puerto Rico, the reason it was so bad is because of all the mismanagement down there in Puerto Rico. He hates the Puerto Rican governor. He, he hates the San Juan mayor. They don’t support him. So he thinks they’re all horrible, corrupt people, Yada, Yada, Yada. He tells us that all the time and has been since the storm hit well this week we learned a little bit more about that mismanagement of the Hurricane Maria response down there in Puerto Rico and it turns out the bungling of it did in fact come from the Trump administration. And to be honest, calling it bungling, uh, is a little soft. The criminal response to Hurricane Maria came from the Trump administration itself, and we can officially call it criminal because this week two former Trump administrations and a private energy contractor were arrested on charges of bribery and wire fraud for the response to Hurricane Maria.
Now, here’s what happened. You had a man by the name of Donald Ellison who was the president at the time of Cobra acquisitions and Cobra acquisitions was one of the companies down there trying to restore the power. In fact, they were one of the top contractors down there. So how did they become one of the top contractors? Well, it’s easy. They bribed woman by the name of Asha Nazif Tribble, uh, who was in charge at FEMA of the power restoration down there in Puerto Rico. So you had Tribble working to renew the power with all these companies. Then you had Ellison, president of Cobra coming up to Tribble and saying, hey, how would you like to go for this private ride in a helicopter? How would you like to be staying in these luxury hotels? How would you like first class flights all over the United States? And Tribble said, hell yeah.
And Ellison said, then I’m going to make it happen. And Alison did make that happen in exchange. Tribble worked with local government down there in Puerto Rico and steered more and more contracts towards Cobra while Ellison continued to lavish Tribble with these trips. Uh, hotels, food wined and dined Tribble all night long and they had this kind of symbiotic relationship. Tribble was benefiting over here with all these great benefits and perks and Cobra was making lots of money with these contracts when they weren’t actually doing most of the work. So they got to pocket a lot. But there was a third person that came into it. Third person by the name of Joe Vonda Patterson, who was a FEMA deputy chief of staff in Puerto Rico, a Patterson left the Trump administration left FEMA in 2018 to go work for Cobra. And it turns out this working for Cobra thing that Patterson had been working out had actually been happening during the response to Hurricane Maria because Patterson was introduced to Ellison by Tribble and they started negotiating from there to see what Patterson could get Cobra while working at FEMA.
And in exchange, Patterson was given a six figure position with Cobra after the response to Maria was, uh, done according to this administration. So Patterson, Tribble and Ellison were all arrested earlier this week. Patterson and Tribble obviously from the Trump administration. Neither of them currently with the Trump administration. They had both left before the arrests, but they were members of the Trump administration while they were committing these crimes, this bribery, this fraud that took place down there in Puerto Rico, while people were suffering this criminal activity on behalf of all three of these people is what helped cause that island to suffer far longer than they should have. And gave Donald Trump a reason to come out and say, oh, look how mismanaged they are down there. They’re horrible and we’re great. Turns out, Donald, it was the other way around because the criminals down there were within your very administration.