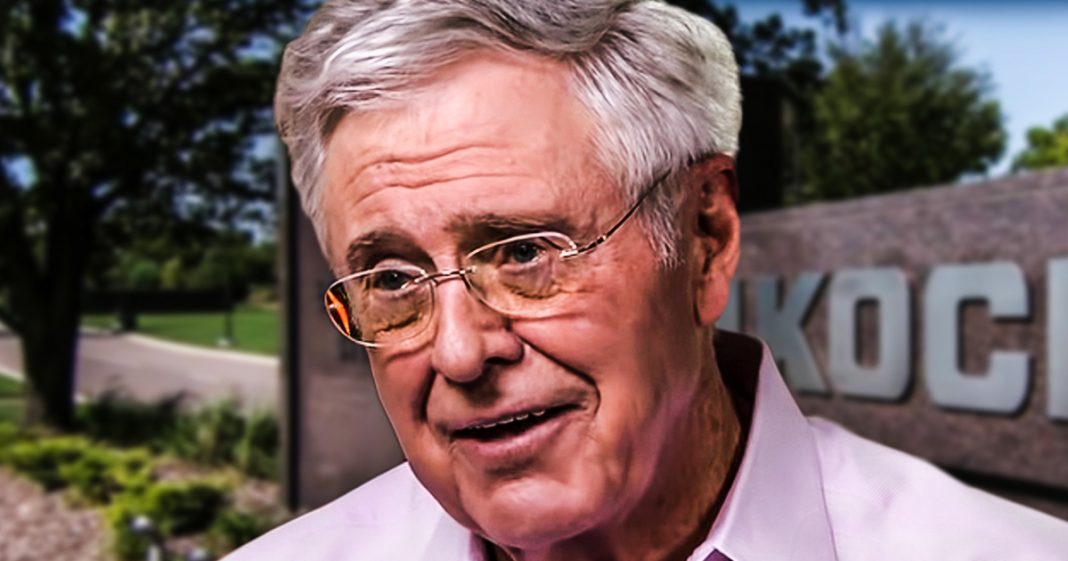 Charles Koch, the surviving half of The Koch Brothers, has been pouring millions of dollars into campaigns to make it harder for Americans to receive food stamps and Medicaid. This is nothing short of cruel, as the multi-billionaire has been the beneficiary of millions in government subsidies even though he doesn’t need any of it. Ring of Fire’s Farron Cousins explains what’s happening.

*This transcript was generated by a third-party transcription software company, so please excuse any typos.
Republican billionaires have always just kind of had this hatred of poor people and it’s never really been explained, right? I mean, these billionaires like Charles Koch, the surviving half of the Koch brothers, they typically don’t have to deal with poor people on a daily basis. I am willing to bet the Charles Koch has not had to walk past a homeless person on the street for decades. Oh, they might see ’em on the news. They might see them from the window of their, you know, expensive cars, but they don’t actually have to interact with them. So why, why are these billionaires launching this massive war on the poor? Well, there is a reason for it, but before we get into the reason we’ve got to talk about their latest escapades, and this is according to a phenomenal new report in sludge from Alex Kotch that explains that Charles Koch, again, the last remaining a horrible Koch brother along with the Bradley family, have been funneling millions of dollars into this group called the foundation for government accountability and what the foundation for government accountability does in addition to wining and dining a republican politicians.
And GOP leaders is, they go out there and they spread propaganda about people using snap benefits, food stamps and Medicaid. They don’t like people getting these government benefits and they have been working with Republicans spending again, millions of dollars to try to get them to scale back those benefits and kick people off of them. In short, these billionaires are spending millions to punish people who barely make thousands. That’s what’s happening in the United States and it’s really ramped up within the past 12 months according to this report. Now as Kotch reports, Koch isn’t necessarily giving a ton of money himself to this organization. Instead Koch’s other groups, donors, trusts and donors, a action fund, I believe it is, or donors trust action. They are giving millions to the group. Those are the dark money groups that the Kochs are associated with and funding, so he’s giving money just not in his own name.
He wants it coming to his other ah from his other groups here. But again, the whole reason is to kick poor people off of government benefits and now for the reason, you know, like I said, they don’t have interactions every day with with poor people. You know, probably don’t even stop to think about them other than how they can cruelly hurt them. But the reason they’re launching these attacks is because they believe it helps to shore up the Republican base. Poor people in the United States have been escape goat for the Republican Party since at least the last 40 years. Ronald Reagan came along with his welfare queen claims and what did he do? He people that these mooches essentially living off the government’s teat, getting these checks every month and they’re living the high life while you, you average American workers, you’re going into the factory everyday, you’re going into the fields every day. You’re going in, you’re sitting in that cubicle every day, barely making enough money to survive. And it’s because of those lazy welfare queens out there.
we’ve got a punish them so that you can do better.
Now, that was the extent of the connection that Republicans have really ever been able to establish. Your life sucks because a poor person is getting food stamps. They never explained how exactly that works, like why your suffering because somebody else is on food stamps because there is no connection. There is no correlation. Somebody getting food stamps down the street from you does not affect how much money your employer chooses to not pay you. Somebody getting food stamps on the other street doesn’t affect your rising healthcare costs. It doesn’t affect how much you pay to walk in and fill a prescription at CVS, but Republicans somehow managed to convince enough people that the poor people were the region. Their life sucks. And the Koch brother, along with the Bradley family and the Bradley Foundation are still at it today.
It is an inhuman, cruel attack on poor people for no other reason than to convince slightly less poor people that they need to vote Republicans so that the very poor people no longer siphon whatever government benefits away from the people who wouldn’t qualify for them in the first place. If it all sounds kind of confusing, that’s because it is because that’s how Republican talking points work. There is no thread. There are no facts. There are no statistics to back them up. It’s just a random assortment of statements that for some reason has actually worked pretty well to help brainwash too many people in this country.