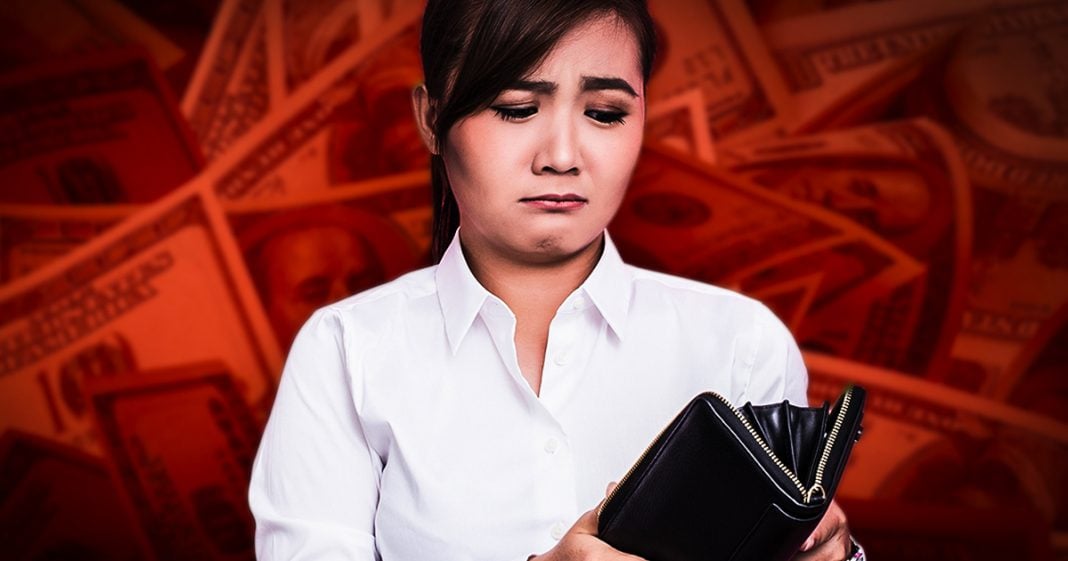 The numbers for 2018 are in, and it appears that American families didn’t see their wages grow one bit, even after Republicans swore that they’d get us raises by cutting taxes on the wealthy. To make matters worse, millions of people lost their health insurance coverage, too. This means that, under Trump, we are losing money and we are losing healthcare. Ring of Fire’s Farron Cousins discusses this.

*This transcript was generated by a third-party transcription software company, so please excuse any typos.
According to new data released yesterday by the US Census Bureau incomes for American workers here in the United States did not increase in 2018 well I guess that’s technically untrue because they did increase by 0.9% but the Census Bureau says that that number that increases statistically insignificant due to the fact that inflation also increased. So real wages essentially remained stagnant and for those following along at home with your recession Bingo card, stagnant wages is one of those boxes you have to check off before you head into a recession. So that’s a bit of horrible news for everyone. But here’s the thing, last year, 2018 the year for which our wages did not increase across the board was also the year that the corporations had their massive tax cuts. Cause keep in mind it was passed at the end of 2017 and immediately went into effect for corporations starting on January 1st of 2018 so we operated all last year with the corporate tax cut American taxpayers.
For those of you who got a tax cut that didn’t go into effect until January of 2019 I personally know my taxes did not change one bit whatsoever. And statistically, most working Americans taxes didn’t change at all. And if they did, they probably went up according to IRS statistics. But nonetheless, wages are stagnant. They told us this tax cut was going to give us all raises. They said four to $9,000 extra in your pocket every year. It was a lie. And now the federal government itself is coming out and saying, you didn’t get more money last year. This is an in controvertible fact. You cannot argue it. It is a fact. They ran the numbers and you didn’t get a raise.
but they told you you would. It gets worse. In addition, in 2018 an additional 2 million people in this country lost their health insurance. So we went from a 25.6 million without health insurance in the year 2017 to 27.5 so just under 2 million people lost their health insurance last year. So again, under Donald Trump, under republican rule, you’re making less money and you’re losing your health care.
But to be honest, that pretty much should have been expected folks. It’s what happened during the Reagan years. It’s what happened during the bush senior years and it’s what happened during the George W. Bush years and now it’s happening during the Trump years because that’s what Republican policies do. They take money out of your pocket, they give it to the wealthy elite and they lie to your face and tell you that somehow it’s going to trickle down. They also tell you, the Democrats want to force you to have health insurance. How authoritarian is that? No, you shouldn’t be forced to have health insurance if you want to die from a preventable disease, that is your choice. Republicans tell us and so they do everything they can to make us lose our health insurance. And that’s what this administration has done. That’s what Republicans in Congress have done. You know, they took away the tax penalty for not having health insurance and so people drop their insurance and that is not good. But that is exactly what Republicans wanted to happen. This is the result of their policies and it’s been the result of their policies for 40 years. You vote for Republicans, you end up with less money in your pocket, you end up with less healthcare coverage and the wealthy elite do better than ever.