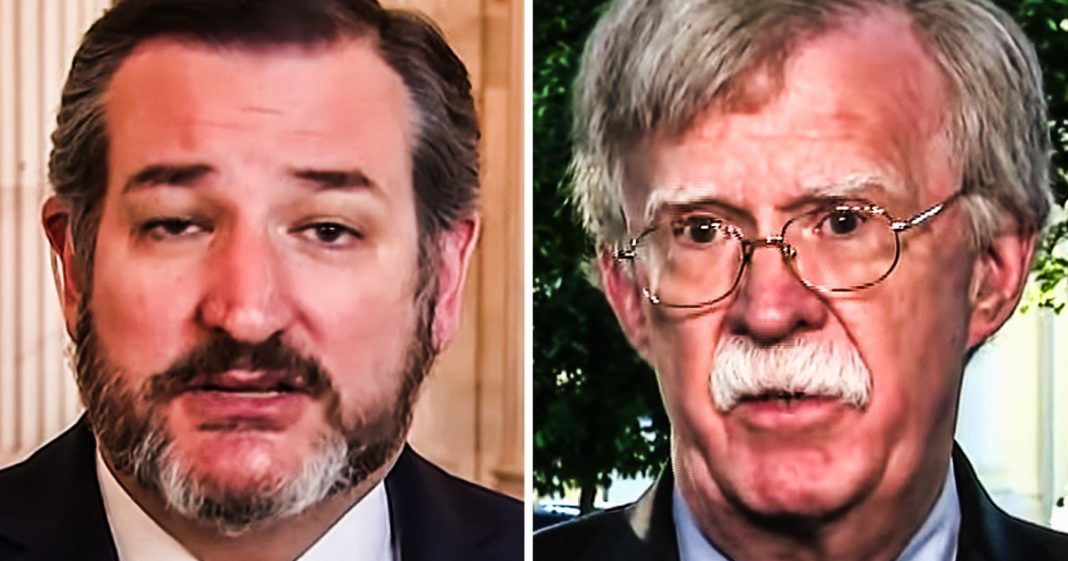 After news of John Bolton’s abrupt departure from the White House was announced, Republican Senator Ted Cruz took to Twitter to express his admiration for Bolton, and then he  immediately went into a conspiratorial rant about how he hopes the “Deep State” doesn’t start purging more people from the government. Ring of Fire’s Farron Cousins discusses this.

*This transcript was generated by a third-party transcription software company, so please excuse any typos.
So yesterday, the big news, obviously John Bolton was fired slash John Bolton resigned slash we really have no idea why or how John Bolton left, but we should all actually just be happy that John Bolton is gone. I mean, the chances of the US getting into a war with Iran or Venezuela at this point just dropped by a few percentage points. They’re not completely gone, but with John Bolton not in there, the chances of them happening did drop slightly. So yes, we should take that as a victory, which makes it even weirder to see people like Nancy Pelosi saying, Oh my God, John Bolton’s departure shows what disarray this is in. We need to have a function no, no, no, no, no, stop, just stop. We don’t need John Bolton in the federal government at all, ever again, ever. In the history of ever. John Bolton is a Warhawk who wants to go bomb other countries.
There is no way to spin this as a bad thing, but don’t worry folks, Nancy Pelosi and some of the other Democrats who are so sad to see John Bolton leave, they’re not the only ones. Apparently Ted Cruz was also very sad to see his good buddy John Bolton leave and Ted Cruz smells a rat, a rat that resides within the deep state. Here is what Ted Cruz had to say in a series of tweets yesterday after it was announced that John Bolton was leaving. John Bolton is a friend and he has devoted his life to defending our national security, including providing wise counsel to multiple administrations. I sincerely hope his leaving the White House does not mean that the deep state forces at state and treasury who have been fighting tooth and nail to preserve the Obama Iran nuclear dear, deal have finally convinced the president to go soft on Iran. That’s right, folks.
It’s the deep state. The deep state ousted John Bolton because they want peace on the planet. Um, now I don’t know that the deep state actually exists in the way that Republicans like to think it exists. But if the deep state does exist and their goal is to not have war across the planet, wouldn’t that be a good thing? Right. I kind of like that incarnation of the deep state. I could get behind that plan. But as Ted Cruz pointed out in one of his own tweets, John Bolton has served multiple different presidential administrations. He has worked in the DOJ. He’s worked in the White House. He’s worked, uh, in the intelligence community. John Bolton is the deep state Ted John Bolton, whether it was his work with the government, whether it was his work with the American Enterprise Institute, the project for a new American century that he was a part of, or whether it was just him practicing law, Covington and Burling or Kirkland and representing defense contractors.
John Bolton has been a part of the deep state since at least the 1980s Ted. But for some reason, you think that same deep state that he is a part of hell, part of the deep state. He helped create with pea knack or now ousting him because suddenly they want peace across the planet. That’s what the deep state wants, according to Ted Cruz. And that by God would just be the worst thing imaginable to a guy like Ted Cruz. There should be no tears shed for John Bolton’s departure. There should be no happiness that maybe he’ll find a new job. No, John Bolton is a piece of crap, and John Bolton’s should be shunned from civilized society because of all of the warmongering and damage that he has caused across the planet.