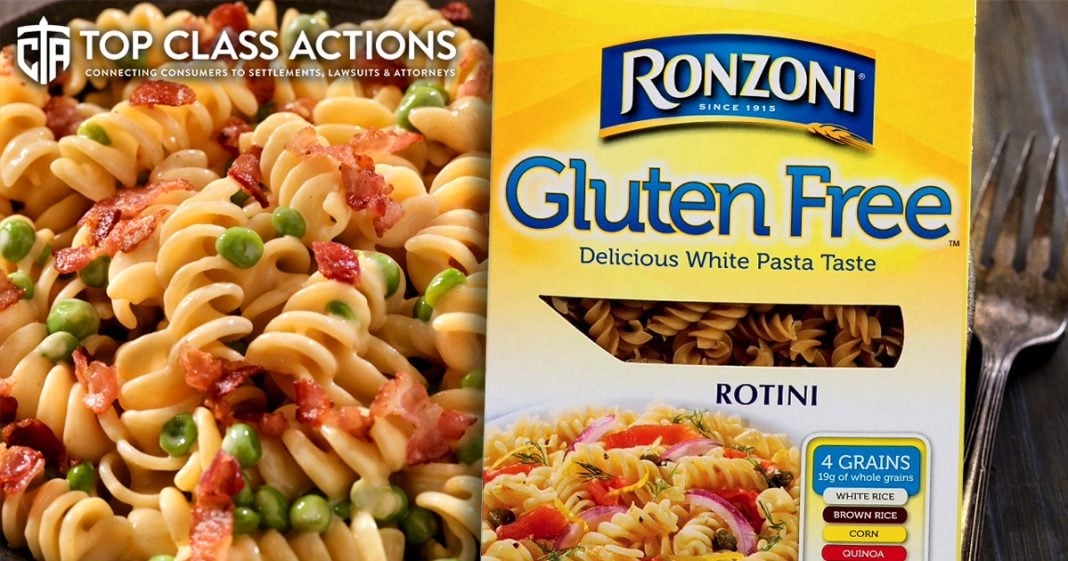 A class action lawsuit claims Ronzoni specialty pastas are packaged in oversized boxes in violation of federal law. Sherrie Clevenger and Theresa Reisfelt say they intentionally chose the Ronzoni “Garden Delight,” “Gluten Free,” “Smart Taste,” and “SuperGreens” pastas for their health benefits, and felt comfortable with the price because they observed that the boxes were the same size of the regular pastas.  Ring of Fire’s Farron Cousins discusses this with Scott Hardy from Top Class Actions.

Farron Cousins:                  We as consumers here in the United States don’t really have a lot of demands from companies. In fact, our really only demand is just give us what your advertising. You know, fill your product packaging with the product that you’re telling us and don’t try to mislead us. I feel like those are very simple demands that corporations continue to not meet. But here’s a story that’s really interesting to me. It’s a story about Ronzoni pasta and they’re allegedly deceptive packaging. And I have Scott Hardy from Top Class Actions with me here to talk about this.

And Scott, I have to say, when I first saw this story, you know, saw the headline, you know, Ronzoni class action says pasta box sizes are misleading. And the first thought I had was, well, why don’t people just look at the, you know, the weight of it? You know, to me it seems like they should have done that. But then when you actually start reading the story, you realize, oh no, they’re actually packaging, you know, 12 ounces of Pasta in the 16 ounce box, putting it on the shelf next to it so there’s no different, this is actually very deceptive on behalf of the company here. Lay this one out for us.

They’re just going to pick up the same box. But think that they’re doing it, they’re making a healthier choice. Instead of buying my regular pasta, I’m going to get the gluten free. I’m going to be a little healthier here. Not knowing that they’re getting shorted out of a significant percentage of food.

Farron Cousins:                  Right. I mean we’re, we’re talking about roughly 25%. So people got their boxes of pasta home and, you know, most of them have the little small window in there so you can see what the pasta looks like, but you can’t see through the whole packaging. So they don’t know that this top 25% of the box is just totally empty. And as you and I have discussed plenty of times in the past, yes, you absolutely can have what they call slack fill if it serves a purpose. But in the case of pasta, dry pasta in a box that slack fill has no purpose and is therefore by law not allowed. I mean this, this is a pretty obvious one here.

Scott Hardy:                          Right. You know, Ronzoni is popping up saying, hey, come on, we’re just saving money. We’re just using the same box. We buy a zillion of them. Why would we get a different box for different pasta? Well that’s an easy argument. Just yeah, put the same amount of pasta in that box and you’re fine. Don’t go ahead and shortchange the amount of pasta and shortchange your customers who are trying to make a, in most cases a healthier choice from their perspective. You know you’re, you’re really shortchanging, like you said, 25% and that’s huge. And that makes a big difference to Ronzoni’s profit margin and their profit that they’re making every year as their consumers going home and pouring out that box and going, oh, wow. Where’s all my pasta?

Farron Cousins:                  Well you know what gets me about it though is that people are buying this, you know, maybe it’s for just them, maybe it’s for their, you know, whole family and I, I think about me, I have a family of six. So if I went in there and I bought this pasta box, brought it home with to make it for my family, suddenly this isn’t even enough to feed everyone. So had they put it in the smaller box so that you could see that it’s not as much. I would have if, if it was me, I would’ve said, oh, I have to get two of these.

So the company instead of, you know, people like me saying, oh I need to spend twice as much, just decided, you know what, let’s just be dishonest about it and technically we lose money on this. Like that’s what is so weird about it to me. If you’d have been honest about it, you’re going to get a lot of people say, oh I better pick up a second one because it might not be enough to feed my family.

Scott Hardy:                          Right, exactly. You get a second one. Ronzoni is using less packaging, makes them more environmentally friendly. They can pitch that as a benefit, as a marketing gimmick, you know, to get more people to buy it and they’re spending less on cardboard for their boxes. You would think there are a lot of benefits here that would just come from being honest with the consumer instead of shortchanging them with the, with that box size.

Farron Cousins:                  You know, I, I think the message you and I always try to hammer home and I, I hope corporations are actually listening to this. And here it is. It’s very simple. It never pays to be dishonest with your clients. And that goes, you know, that goes from lawyers too. That goes for doctors that goes for every single person on this planet. You’re never gonna win, being dishonest and in the case of corporations, probably gonna cost you quite a bit of money in the longterm.

For more information about this issue, please follow the link in the description of this video and head to topclassactions.com and while you’re there, make sure you sign up for their weekly newsletter. Scott Hardy with Top Class Actions. Always a pleasure talking to you.