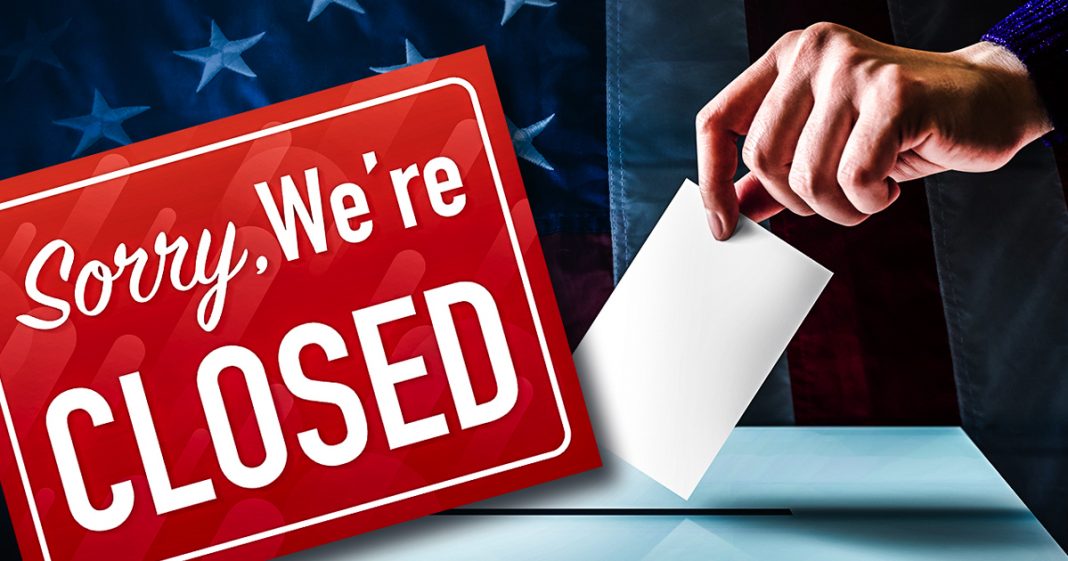 Republican state leaders have been shutting down as many polling places as possible over the last few years, most of them located in heavily minority areas. A total of about 1,200 polling places have shut down in recent years, making it harder for these people to vote, and impossible for many to even have a chance to vote. Ring of Fire’s Farron Cousins explains why this is happening.

*This transcript was generated by a third-party transcription software company, so please excuse any typos.
Republicans will do anything to win elections as long as it doesn’t involve coming up with policies that are actually going to help American citizens. That’s the one thing they will not do, but what they’re doing across the south and that is both the southwest and these southeast here in the United States is that Republican controlled states since the year 2013 have just been shutting down polling places left and right. In fact, almost 1200 polling places across the American south have shut down in just the last six years gearing up for a massive attempted rigging of the 2020 presidential election and here’s how they were able to get away with it. Obviously 2013 we had that massive supreme court case for the voting rights act of 1965 where they went in there and tried to dismantle the parts that said, hey, all these states that have to go through a review of any voting changes because they have a history of discrimination.
How about we scrap that because that’s what the southern states wanted. Eric Holder and the Justice Department at the time went in there and tried to save it and did a really horrible job against the very conservative court. And the conservative court said, nope, no more reviews. You discriminatory states no longer have to submit your plans for review before you can enact them and you can basically just do whatever the hell you want. We’re not going to double check Ya. And that’s what’s happening today as a, a major majority of these polling places that have shut down the roughly 1200 of them happen to be in minority areas. Here’s what’s happening in the American south that is causing more and more of these polling places to close. And it seems counterintuitive, but we are having larger voter turnout. Larger voter turnout you would think would mean, oh, we need to open more polling places.
But that’s not what the Republicans who control every one of these states wanted to do. Instead they said, hey, high voter turnout always hurts Republicans. We saw what happened in Georgia. I mean we saw what happened in the Alabama special, a Senate race when Roy Moore got defeated. But there were other reasons for that, but still freaked Republicans out enough to start closing polling places. Florida always neck and neck, no matter who the people are. It’s always neck and neck. Texas starting to look a little more blue so they’re trying to shut them down. Arizona, same thing. Nevada, same thing. And all they can think to do is we’ll, we’ll just close the poll in places where the Democrats go and vote. You know those areas with more black people, we just will shut those down. So now you’re going to drive 40 miles over to the next precinct to cast your vote.
Oh, but we’re also going to cut down early voting. So you really only have, you know, the one or two days to do it. We’re going to cut down the polling station hours cause we don’t want to have to have people standing there all day and this is all forms of voter suppression that in the past would’ve been prohibited by the Voting Rights Act. But the supreme court killed that and that’s why we have what we have today and make no mistake about it. This is so that Republicans can rig elections because the only way they can win is by cheating.