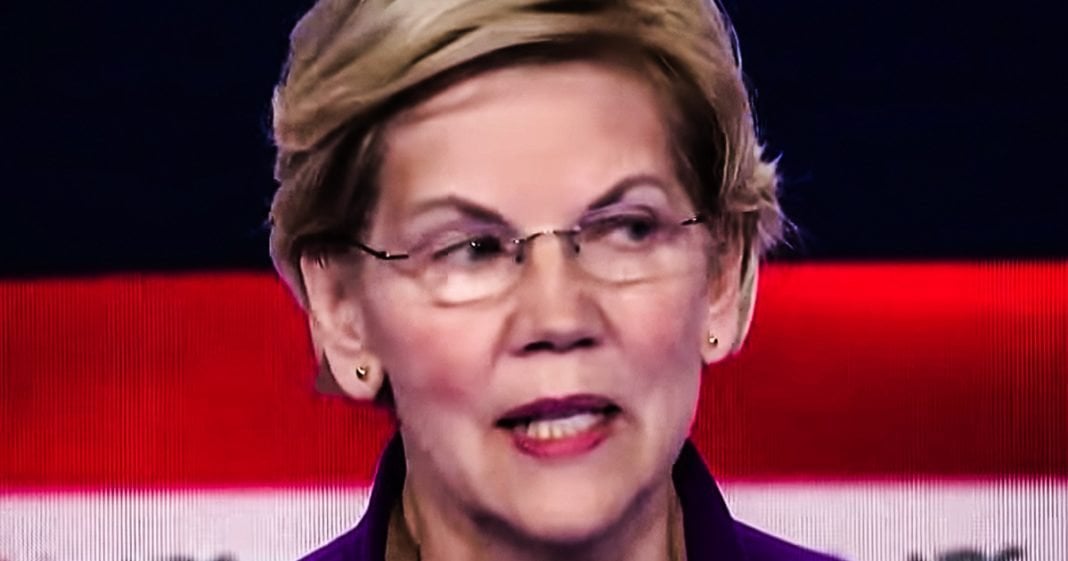 Wall Streeters say that they are afraid of Elizabeth Warren, and that’s good. But Warren has still made some costly mistakes in the past few weeks that aren’t sitting well with some voters. Her decision to reach out to Hillary Clinton, her admission that she could accept PAC money in the general election, and her refusal to answer a question on her military budget vote are all troubling developments. Ring of Fire’s Farron Cousins discusses these unforced errors from Warren’s campaign.

*This transcript was generated by a third-party transcription software company, so please excuse any typos.
Folks, some really bizarre things have been happening with Elizabeth Warren over the last couple of weeks here. Uh, some of them technically even longer than that, but just in the last few weeks, Elizabeth Warren’s been committing a lot more unforced errors with her campaign. Now, we had actually talked months ago about the fact that Elizabeth Warren did commit that unforced error with the DNA test, not by taking it, but by not jumping on top of the narrative as she tells it herself, which has not been amplified enough. She had been told by her parents that, yes, we’re part native American. And so that’s why she had said that she was, I’ve been told that by my parents, a DNA test confirmed that that was never true. Kind of same thing with Elizabeth Warren. You know, she’s got a little bit, but not much. And that’s how she should have described it. Nonetheless, unforced error on her part by letting Republican’s capture the narrative.
Now, in the last few days, we’ve seen reports that Elizabeth Warren is meeting with Hillary Clinton. That’s, that’s not good. Why? Why, what? What possibly could Hillary Clinton be telling you that would benefit your campaign, unless The only thing she told you was for the love of God, don’t do anything I did in 2016 do better. Go visit Wisconsin right now. Like right now go. But I’m willing to Bet Hillary Clinton didn’t do that. We also learned that Elizabeth Warren, who has promised not to take corporate pack money in the primary, although she’s open to taking it in the general, which is another Eh, don’t like that. But anyway, her campaign right now is also using leftover funds from her 2018 Senate race and some of that was from big money corporate donors. So that’s not technically true that she’s not using only grassroots money in the primary. She is using a roughly 10 million leftover from big money donors.
So that’s disappointing. And then you also had the other day when TYT’s Ima Viglinde asked her straight up, hey, you voted for this massive, horrible military budget. Could you explain why an Elizabeth Warren danced around the issue? She couldn’t actually answer that question. These are all unforced errors. These are all things that Elizabeth Warren could have and should have avoided. But here’s the thing, I’m not saying this to somebody who, who hates Elizabeth Warren. She is absolutely my number two choice. If she wins the nomination, I’m not going to be upset at all about that. In fact, according to the latest polling, 80% of Bernie Sanders supporters would be okay with Elizabeth Warren getting the nomination. Same thing with 80% of Warren supporters would be fine with Bernie getting it. I think only 60% of Biden’s supporters are okay with Warren. So, so the Biden folks are really the ones who don’t like Warren, but nonetheless, folks, I like Elizabeth Warren.
I Trust Elizabeth Warren and I think based on her record in politics that she is going to be as progressive as she says she is going to be. And that’s why it is infuriating to me when I see her make these kinds of mistakes. I would love to see a Biden, uh, excuse me. Oh God excuse me a Bernie and Warren ticket. I don’t want to buy it in anywhere near that. I don’t want them anywhere near it folks. Um, but Warren keeps making these kinds of mistakes and they’re stupid mistakes and they’re mistakes that actually shouldn’t necessarily cost her, but they are because it gives the appearance to those who may have been on the fence that she’s weak or that she’s dishonest or that she’s somehow corporatist. And I can understand why people think that when you do things like this, when you break that pledge and say, I’m not taking corporate PAC money with a little asterisk and says only during the primary except I’m also kind of using it in the primary, that’s not okay.
When you suddenly decide like, I’m going to go talk to Hillary Clinton and pick her brain about how to lose a presidential election, not a good sign when you can’t give a straight answer as to why you voted for this horrible expanded, bloated military budget. Not a good sign. And I’m not saying Elizabeth Warren is the only one with flaws folks, they all have flaws, but hers cut a little bit deeper because I really like her and I really do trust her and I want her to be on that ticket. But in order to make that happen, whether she’s at the top of the ticket or whether she’s the vice president, she’s got to clean up these mistakes, got to work on this a little bit better, and be prepared to take answers from reporters like those at TYT and elsewhere who know what the hell they’re talking about, and they legitimately want to get those answers out to their viewers so people understand where the candidate is coming from. Warren has to work on that. If she wants to make it onto that ticket.