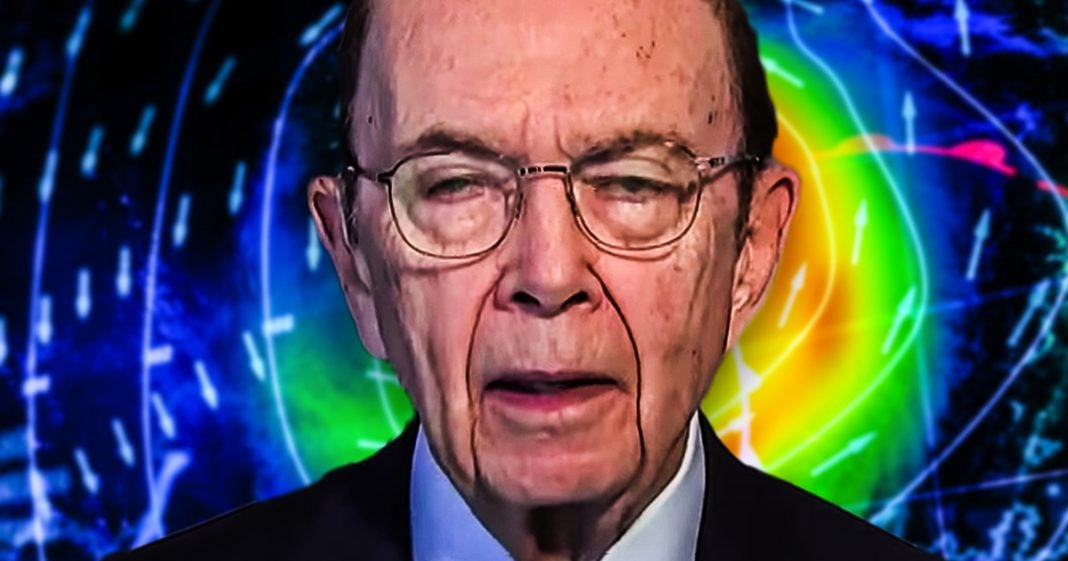 It appears that “Sharpiegate” might actually be a little more involved than we thought. According to reports, Secretary of Commerce Wilbur Ross threatened to fire employees at NOAA if they corrected Donald Trump’s statement that the storm was going to hurt Alabama. The weather is being politicized, and employees who dare speak out about Trump’s incompetence are being threatened. Ring of Fire’s Farron Cousins discusses this.

*This transcript was generated by a third-party transcription software company, so please excuse any typos.
Well folks, just when you thought sharpie gate couldn’t get any dumber, it went and got a hell of a lot dumber according to the latest reports, Wilbur Ross, the secretary of commerce, and let’s not forget that. As we mentioned yesterday, the NOAA the National Oceanic Atmospheric Administration is based in the Department of Commerce. For some reason, Wilbur Ross actually threatened to fire top NOAA officials last week if they dared came out and contradicted Donald Trump’s statement that hurricane Dorian might hit Alabama. Now, Wilbur Ross issued this threat last Friday, so we’re talking just a couple of days ago, Wilbur Ross came out and said, if any of you dare challenge this president, if any of you go out there and say that he is wrong, even as the swarm was battering Carolina, you’re fired.
He wanted Dr Neil Jacobs, who is the acting director of NOAA to come out and disavow the tweet from Birmingham’s national weather service that they sent out after Trump warned us a week and a half ago that the storm was going to hit Alabama, even though by the time he said that Alabama was nowhere near the projected path anymore. Well, Dr Neil Jacobs had NOAA say, I’m not going to do that. I’m not. The president was wrong. What he said was false. And that is what sent Wilbur Ross over the edge because Wilbur Ross, when he’s able to stay awake, understands that his only job is to protect Donald Trump, not to protect the science at the NOAA, not to protect the people who do need to be warned if a storm is coming in their direction. But to protect Donald Trump, not to protect commerce, not to do anything other than to make sure that Donald Trump’s ass is thoroughly kissed. And that is exactly what Wilbur Ross is doing. And he is willing to fire people who have been in this, uh, organization, this government, uh, department for years and years and years, people were specialized, advanced degrees who know what the hell they’re talking about versus a man who couldn’t even keep a casino running. And Wilbur Ross chose the failed businessmen. Science can go to hell. Everything else can get washed away as long as Wilbur Ross continues to protect the president and he doesn’t care who he has to fire in order to keep Donald Trump’s ego safe.