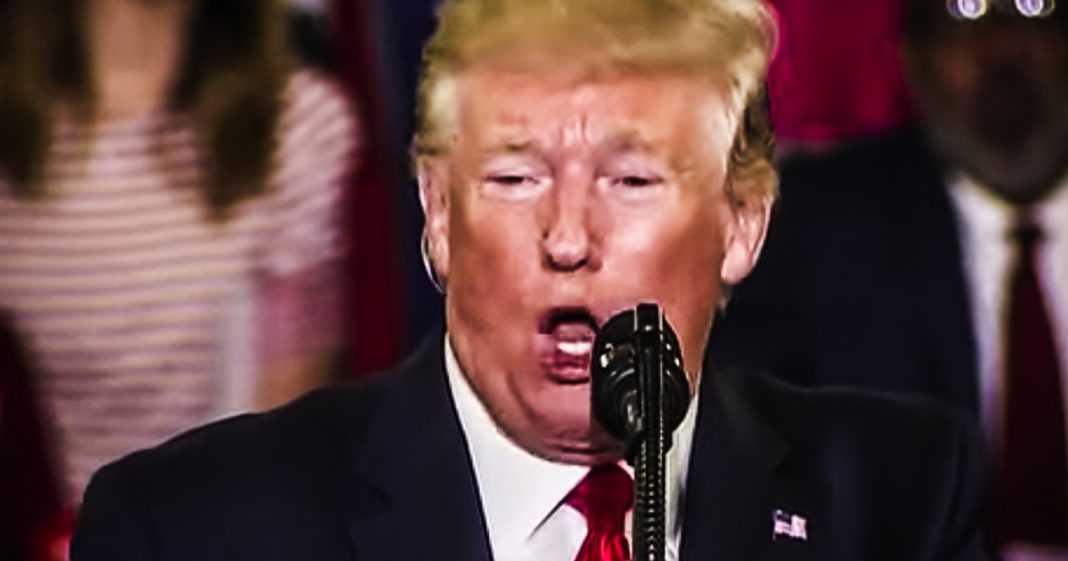 Wall Street banking giant JP Morgan has created what they call a “Volfefe Index” so that they can better track how Trump’s tweets impact global markets. Bank of America has already warned that Trump’s Twitter habits are causing crashes across the market, and now the rest of the banking world seems to be getting in on the action as he costs them millions of dollars. Ring of Fire’s Farron Cousins discusses this.

*This transcript was generated by a third-party transcription software company, so please excuse any typos.
Last week we told you about the fact that Bank of America Merrill Lynch was having to come out and basically tell people, warn people that they’re 401ks are in danger because they’ve analyzed Trump’s tweets and they’ve watched the market and they’ve matched up the days when Trump tweets more than 35 times in a day. The market tanks, be careful of those days. Watch your 401k because it gets pretty bad those days. Well, not one to be left out of the major Wall Street banks tracking Twitter a issue. J P Morgan has now created what they’re calling the vol fefa index, which is a combination of the words volatility. And Trump’s made up word coheafe. So the Vol Fefa index that JP Morgan has created basically tracks Donald Trump’s tweets and market reactions to them. Now, when JP Morgan created this, they said they didn’t take any one specific tweet, uh, and match that up. But what they did find which common words that would cause the market to crash. And here are those words, China billion in products. When Trump starts sending out tweets containing one of those three words, or even worse, all three of those words, the market panics and it starts losing tons and tons of money.
I mean it was averaging $600 million a day and sell offs just for the month of August, and they’re now tracking it back saying a lot of this has to do with Donald Trump’s Twitter feed,
and I know a lot of conservatives out there think that Donald Trump’s Twitter feed is phenomenal. He’s out there letting the liberals have it, call them people’s names, just totally owning them. Left and right, he is also destroying your 401k and for the wealthy folks out there, the ones who put Donald Trump and other republicans in office ah, you’re losing a lot of money too. Although I have no sympathy for you folks, and I hope you lose every single thing you’ve ever made. It’s the folks with the 401k. It’s the retirement plans. The people who are still working their butts off every single day, paying into a retirement plan, hoping that they’ve been responsible with their money and they can have a decent retirement. They’re losing that opportunity because of the Moron in chief. We have can’t stay off Twitter for five minutes folks. That’s not fair to these people. Even if they are Trump supporters, they still never signed up for this and that’s not okay. That’s not fair to them. But another part of the problem though is just the general volatility of the stock market. I mean we’ve based, I mean put this basically at the heart of our economy, this made up thing.
Stocks are made up folks, I don’t know if you realize that, but stocks are made up. When a company is formed, they get to decide how many shares of stock do create out of thin air and then we can just sell those things that don’t actually exist to other people. And they’ll give us money and then we use that money to go do things. But if they want to sell it back to us and we have to pay them money to buy back our fake thing that we just made up. I mean, when you really start to just kind of poke some holes in it, the stock market is one of the dumbest things on the planet. I know it’s helped businesses and sure, it’s probably helped. Some people make a hell of a lot of money, but it’s completely useless. It’s overly volatile. The president can say one stupid thing and send the market into an absolute panic, and that’s not fair for the entire US economy. I think it’s time that we put an end to the stock market. I think it’s time that we get rid of this artificial thing that businesses created to make more money for themselves, because if it is the kind of thing that can be destroyed by a tweet containing the words China product and billions, probably not a smart idea to base our entire economy off of that thing.