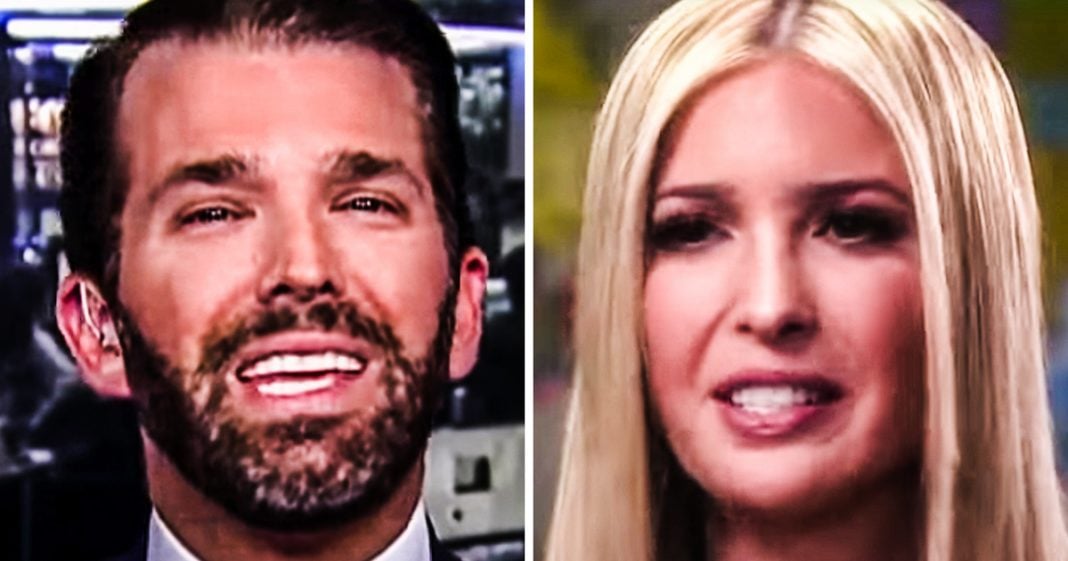 Both Ivanka Trump and Donald Trump, Jr. believe that they are the rightful heirs to the Trump family throne, and they have been engaging in a type of Cold War for the past few years, according to reports. The siblings believe that the other one is planting damaging stories about them in the media as they both fight for their father’s approval. Ring of Fire’s Farron Cousins explains what’s happening.

*This transcript was generated by a third-party transcription software company, so please excuse any typos.
Well folks, there appears to be even more trouble in paradise than just Donald Trump being angry that Mike Pence has a higher approval rating than him. Uh, the approval that’s being fought over right now is the approval of Donald Trump himself. And that fight is taking place between Ivanka and Donald Trump jr at least according to a new report by the Atlantic’s McKay Coppins. Here’s what’s happening. According to this bombshell new article from Coppins, allegedly both Ivanka Trump and Donald Trump for the last several years, including during the original 2016 campaign, have been fighting to be the one that their dad depends on, right? They just want daddy’s approval. They want daddy’s love. They want to be the favorite. And so in their quest for that favoritism, they have both grown increasingly paranoid. And Ivanka and Don Jr are both accusing the other one of planting negative stories about them in the media. One specifically that Coppins mentioned was a story from 20 2018, I believe, or no, excuse me, 2016 he said Trump kids on the campaign trail.
Don Jr wows Ivanka disappoints. Now, according to the report, Ivanka actually accused on Jr of being behind that specific article and then Don Jr called her out for allegedly being the one who was feeding all these off the record negative things about Donald Trump jr to the press, allegedly. Also, at one point, Donald Trump jr came up to Ivanka and said, uh, tell your people to stop being so negative about me and planting these stories in the press. So he outright, according to the sources, accused her and her staffers of doing this. Now here’s what’s really interesting about this. We know that Donald Trump jr definitely has political aspirations once his father leaves office, he has talked multiple different times about running for office as president of the United States. Uh, he’s hinted at maybe he’ll run for mayor in New York, maybe he’ll run for governor in New York. Brad Parscale. Donald Trump’s 2020 campaign manager has warned us that we could be looking at a Trump political dynasty that lasts for decades.
But does Ivanka actually have political aspirations? Could Ivanka actually go out there on the campaign trail and be successful? Is she likable? I think the answer to every one of those questions is no. Now I’m not saying that Donald Trump jr is likable by any stretch of the imagination, but he does have a little bit though probably not enough of his dad’s ah brash personality to at least gain some votes. I think Ivanka would fall flat. Now, don’t get me wrong, I think they would both absolutely get slaughtered in an election, but I think Trump jr would fare much better than Ivanka would. Ivanka has no personality, she has no likable traits, and she has that slimy little weasel of a husband who probably is going to end up behind bars that at least some point in his life just like his daddy did. So there’s lots of baggage with these two kids.
But I think what it boils down to overall is the fact that they pretty much were neglected as children. Daddy wasn’t there, daddy didn’t care, and now the daddy’s in the spotlight even more so than ever. They want to be there with him. They want to be the one that he depends on. This isn’t a humorous story, folks. This is actually a very sad story. This is what happens when you neglect your children. This is what happens when you don’t love your children, and this is what happens in the case of Ivanka, when you let one child know that she absolutely is your favorite above all the others, and you have no problems hiding that from your other kids. According to Coppins. In this article, Don Junior said, he always knew that Ivanka was the favorite. You know, he was daddy’s little girl, and so he always had to fight for that attention and look at where that’s gotten us. Now again, this isn’t humorous. This isn’t funny that these two are fighting. It’s very sad that at this point in their lives, they’re still having to fight for even just a little bit of their father’s attention.