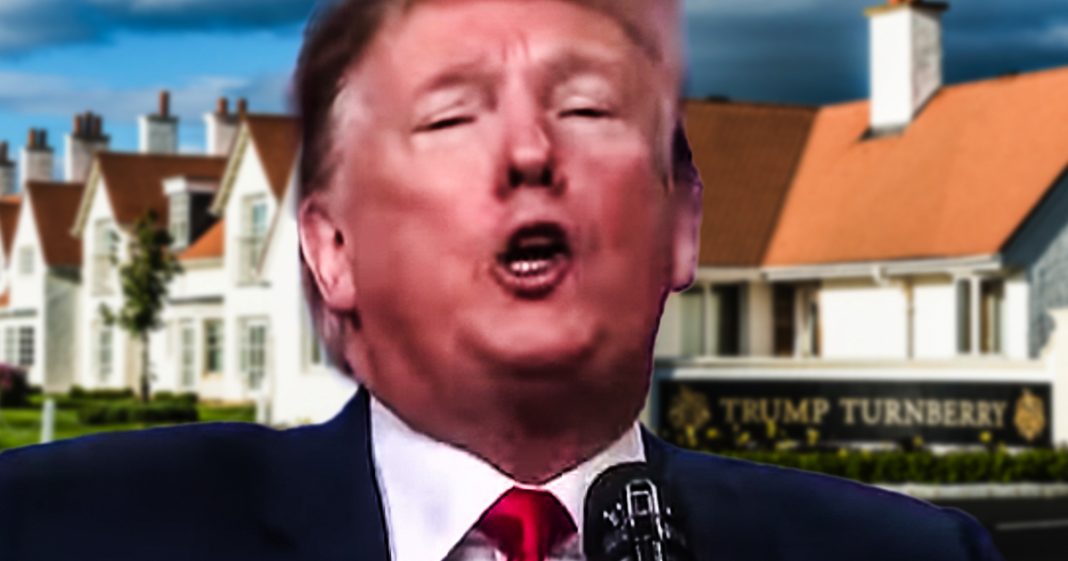 Donald Trump swore all day Monday that he had nothing to do with military personnel and the Vice President staying at his Turnberry golf course in Scotland, but it turns out this was just another lie. And the little failing airport that feeds Turnberry? Trump’s got a deal with them, too, and that’s why hundreds of military flights are stopping at the inconvenient airport in order to spend millions on fuel. Ring of Fire’s Farron Cousins explains what’s happening.

*This transcript was generated by a third-party transcription software company, so please excuse any typos.
Yesterday. Monday, Donald Trump tweeted out the following in response to the, uh, mounting reports of how the US military and Vice President Mike Pence, we’re using the a little airport over in Scotland that just happened to be not far down the road from Donald Trump’s Turnberry golf resort and spending millions of dollars there. Donald Trump tweeted out the following. He said, I know nothing about an air force plane landing at an airport, which I do not own and have nothing to do with near Turnberry resort, which I do own in Scotland, and filling up with fuel with the crew staying overnight at Turnberry. They have good taste. Nothing to do with me. He says in all caps at the end there. Well, I guess that’s, that’s kind of cut and dry then, right folks, he doesn’t own that little tiny airport. The a Prestwick I believe it is. He doesn’t own it.
He doesn’t have an agreement with them, certainly. He says, actually he does though. Yeah. You see some good investigative reporters got their hands via a foya over in Scotland on an agreement between this little Prestwick airport and Donald Trump himself. Donald Trump does in fact have an agreement with the airport and he’s had it since he opened up Turnberry because again, this little airport is basically the main artery into Turnberry. If you don’t fly into this airport, it’s a pretty long, multiple hours, long drive to get to Donald Trump’s golfers or, but the little airport was failing. They were running out of money, they didn’t have enough. So Donald Trump comes in and says, Hey, I’m building this golf course 20 miles down the road. I’ll direct a lot of traffic in through your little airport. What you’re going to do for me instead is you are going to ferry people or shuttle people, excuse me, over to my golfers resort.
I know it’s very far away, much further than any of the other hotels you shuttle people to, but you’re going to do it for my golfers resort because I’m going to give you lots of business. And the airport said, okay. And they had an agreement according to documents obtained. So he did have an agreement to give them lots of money. Oh, and you know who else actually has an agreement with them now too. For some reason, the US military, the US military does in fact have a deal with this tiny little failing airport to stop there and fill up with gas and spend millions of dollars in tax payer money. They’ve, uh, made more than 250 stops at this little airport just so far this year. Hundreds more in the other two years of Donald Trump’s presidency because they do have a deal.
This is 100% an impeachable offense. Not only did Donald Trump lie to the American public about it, and I know that’s not technically impeachable. The man wouldn’t have lasted a day,
but this kind of quid pro quo, this is absolutely impeachable. Donald Trump is raking in money, taxpayer money because of a deal he negotiated shortly before he became president with this tiny little airport. What started off as just a story about Donald Trump, you know, unjustly enriching himself has turned into a full blown scandal at this fo- Uh, at this point, folks, the documents are there and the documents are clear and we now know that this is a thing that happened and, that Donald Trump was lying through his teeth when he sent out that tweet saying, he has nothing to do with it, and there is no deal. There is a deal. It’s in writing, and Donald Trump is guilty as hell. In this particular instance.