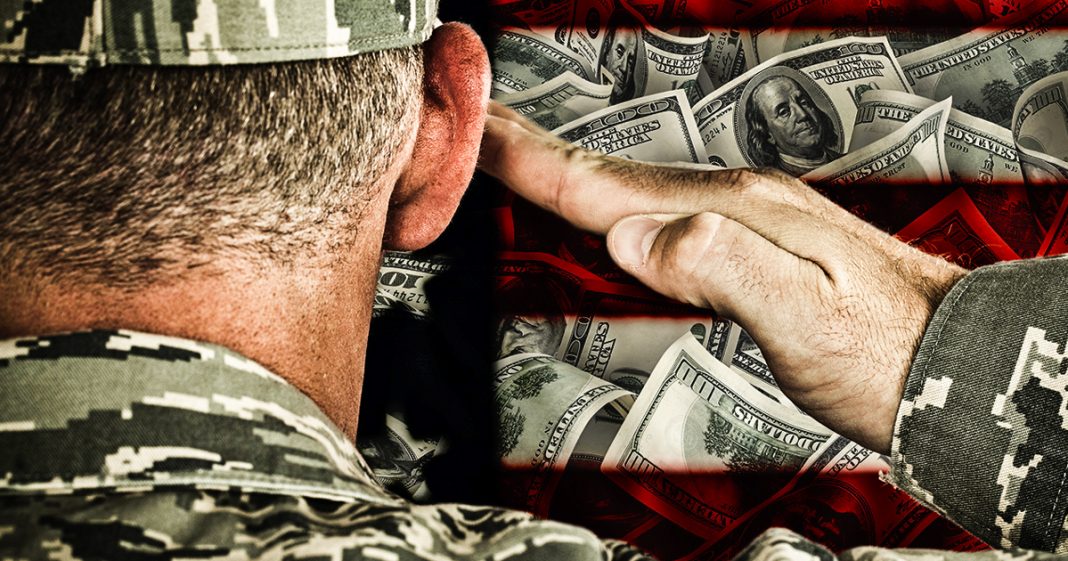 The US Military is now under fire for their role in helping to line the President’s pockets by staying at his properties, even though they are far more expensive and often out of the way of where they are even going. This practice was revealed just a few days ago, and both the public and the military want answers as to why this is happening. Ring of Fire’s Farron Cousins discusses this.

*This transcript was generated by a third-party transcription software company, so please excuse any typos.
Well folks, another day, another investigation into a potential violations by the Donald Trump administration. This time involving the militaries, frequent use of Donald Trump’s resorts as their little overnight trips. On Friday, politico reported on an instance back ah, I believe it was in March, where you had a military plane full of the air, national guard reserve troops headed back from the Middle East over to the United States, but they needed to make a stop for the night. So they stop over in Scotland. And rather than staying at a, you know, regular hotel somewhere near the airport. No, no, no, no. They decided at that point, let’s just bus on over to Donald Trump’s golf resort around here. The same one Mike Pence recently stayed at, you know, it’s a little bit more expensive, but according to the military, oh, it’s totally still within their budget. But if you asked the troops who had to go stay there, uh, it 100% was not still in their budget. Well. Then yesterday on Sunday, politico found out a little bit more information and turns out this instance back in March was not the only time. In fact, this has happened frequently
So frequently in fact, that the number of times it has happened adds up into the hundreds and each time when you have a dozen military members stay at a Trump property, maybe a couple dozen, that’s all money that flows right back into the president of the United States pockets and it’s all money that came out of our pockets in the form of tax dollars going to the US government. So here yet again, we have an instance where tax payer money is going into Donald Trump’s businesses and then immediately back into his pocket. The military has now announced that they are investigating this. They want to get to the bottom of this. They want to find out why it happened. But again, the military is not going to find any wrongdoing here because they’ve already admitted, you know. Well, we know it was still within the budget, but just because we can, does that mean we should, I’m actually quoting one of the leaders of the US military on that. We know we can, but the question is, should we, you know, obviously we don’t want to misuse taxpayer dollars. Yeah. Because if the military is known for anything, it’s not misusing taxpayer dollars.
But nonetheless, they have already concluded the, no, it’s totally okay to do this. These people are in budget. But again, I hadn’t asked the troops because they said, yeah, it actually costs so much money. It didn’t leave us anything left for food. We couldn’t eat because the hotel was so expensive and so over budget. Oh, and it gets worse folks. See there’s this little airport over there in Scotland, Prestwick little civil airport, but really if you don’t into Prestwick, you cannot get the Donald Trump’s golf resort over there. And Prestwick has been failing. They’ve been going under until of course, Donald Trump became president of the United States and suddenly a lot of military flights were reroute, rerouted to land at Prestwick. You know, for refueling. We’re spending millions upon millions of dollars at this tiny little airport that serves as the main artery to get to Donald Trump’s golf resort at that airport, where to go under Donald Trump’s golf resort would likely be right behind it. And so here’s what happened. From 2015 to 2019 air mobility command aircraft stopped at the civil airport. 936 times of those crews stayed over night in the area, 659 times. Now it started with 95 stops in 2015 and then we had 259 stops just so far in 2019
not to mention 257 in 2018 180 in 2017 and 145 and 2016 the military is trying to curry favor with Donald Trump. That is what this is about. This is about them putting more money back in his pocket. I don’t know if you’re going to find that Donald Trump has directed them to do this, but I do know that he is personally benefiting from it and that’s the problem. This man didn’t divest from his companies and Republicans are still out there telling us, but he’s not taking a salary. I mean Dan Bondgino on Fox News this past weekend told Maria Bartowromo. Oh, but he’s not taking a salary and they think people stay in a couple nights at his hotels are putting money in his pocket. Dan, how the hell do you think hotels make money?
Peo- people staying overnight. That is legit. How they make money. You Moron.
and it’s a hell of a lot more than $400,000. Now, I would have told you this on Twitter, but for some reason before I ever uttered your name once in my life, you decided to block me. I guess you thought I was a preemptive threat even though I had never mentioned you, spoken to you, responded to you or added you. But sure, go ahead Dan. Big Tough Guy, right? But here’s the problem, folks. This is a real issue. Donald Trump is misusing and abusing our military and it’s putting more money back in his pockets, and I’m glad that the military is going to investigate this. I’m disappointed that we already know that they’re not going to come to the conclusion that anything incorrect was ever done, but I’m also glad the Democrats in the House of Representatives have decided to expedite the impeachment process, and this is one of the issues they will be looking at