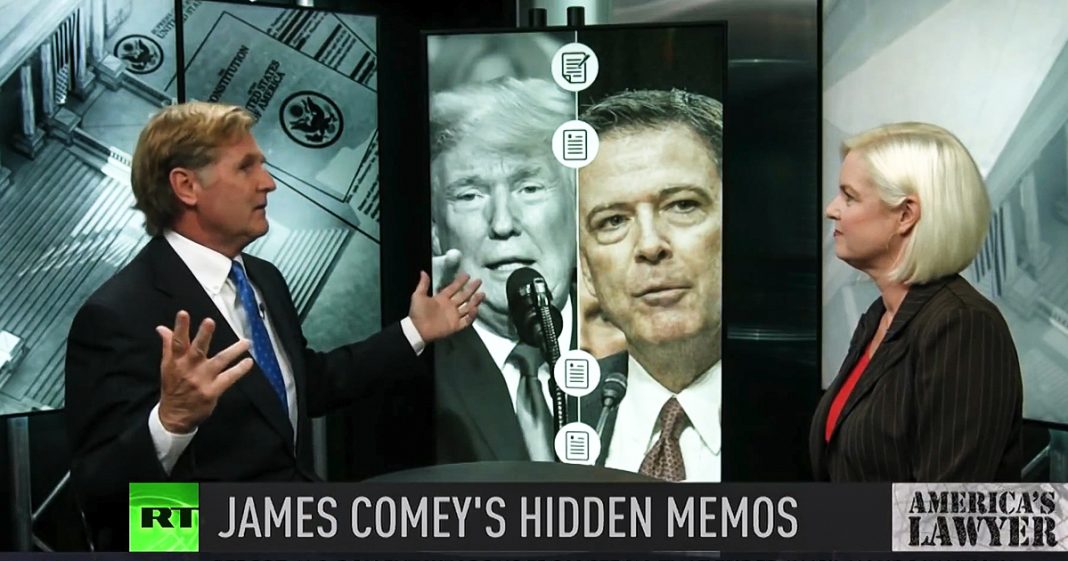 Via America’s Lawyer: Mike Papantonio is joined by legal journalist Mollye Barrows to discuss the DOJ’s failure to prosecute former FBI director James Comey for his handling of private memos regarding interactions with President Trump. While liberal media outlets may herald Comey a hero for his actions, what precedent does this set concerning rule of law and FBI policy about handling sensitive materials?

Mike Papantonio:             Former FBI director James Comey has come under fire once again, this time for failing to submit private memos detailing exchanges with president Trump during Comey’s investigation into the administration’s ties with Russia, according to him. Legal journalist Mollye Barrows is here to walk us through it. I thought this was remarkable. MSNBC is calling this guy the new Paul Revere. I mean, he’s a criminal. I mean, he, he, he engaged in criminal conduct, but MSNBC, oh, he’s the new Paul Revere.

Here’s what’s so weird about this. All of a sudden you have this shift of liberals embracing the spook industry. I mean like they’re their buddies. Again, 20 years ago, no, we understood the spook industry for what they are. They churn up wars, they sell weapons, they promote imperialism in every kind of way. We undermined countries all over the world. That’s who, that’s who this guy is.

Mollye Barrows:                Well, there are lots of discussions about that because basically what the whole reason that Comey said he kept these memos in the first place is because he was concerned that we had a president that was corrupt and was going to take steps that we’re going to cover up his corruption. And he based it on several conversations that he had with Donald Trump, including the first one back in January of 2017 where Donald Trump emphasized how important loyalty was to him. So his justification and eventually leaking these memos to a law professor who then leaked it to the Times it was that report of one of those memos about, hey, I need you to take it easy on Flynn is what Comey said Trump had told him that sparked the two year Robert Mueller investigation.

So Comey’s reasoning for that was, I was concerned, I love this nation. I felt like he was bucking the rule of law. And so going back to your deep state theory, there are those that are basically saying, well, you know, then you’re doing the same thing because you didn’t adhere to your own employment policy.

Mollye Barrows:                Your own, FBI, and DOJ policies because you thought what you thought was strong feelings. I feel passionate about this. What I think is more important.

Mike Papantonio:             Look, Howard Zinn, you remember how critical Howard Zinn was to all of us understanding how democracy works.

Mike Papantonio:             Chalmers Johnson always talked about characters like Comey, and they talked about the fact that once we allow a handful of people to determine where America handles, where we head for policy, we’re kind of, we, we’ve moved on beyond, beyond democracy.

Mike Papantonio:             So Howard Zinn, pretty smart guy, you know, probably wrote the most important books ever written about, you know, America’s involvement with other countries where we push imperialism, we push wars, we churn. He would always return to the fact that it’s people like Comey.

Mollye Barrows:                Well, their elitist way of thinking that we know what’s better than the average person. We’re more educated. We have more money. We understand how the world works, and I think there is this perception, especially in higher ups of law enforcement in any realm of government that perhaps they have access to more information. They know better than the average person. So what they feel about something should go, but ultimately that’s going back to your point. I mean, that’s why we have democracy. That’s why we are under the rule of law. Why this is supposed to be applicable fairly to all because it’s a standard by which you judge your behavior. You don’t get to pick and choose what you do and what or somebody does.

Mike Papantonio:             We hate Trump so badly that anybody who is an enemy of my enemy is my friend. I mean, that’s almost what we’re seeing.

Mollye Barrows:                I think you’re seeing that across politics, across news media. The more segmented we are who at whatever somebody tells you that already fits in with what you believe.

Mollye Barrows:                And so yes, as long as Comey is doing and saying things that they feel like are in the better interest of what they personally feel, they are going to hold him up as a Paul Revere and a hero, but…

Mike Papantonio:             Well, exactly the, exactly. There’s two sides to it, but here’s the difference. Sarah Sanders doesn’t go on the air and churn up war. You see she’s, she’s a press secretary.

He thought what he felt was more important than actually abiding by policies. That if he truly felt Trump was going to be a threat to the country or was trying to buck the rule of law, that he should go ahead and report it to other authorities and you don’t keep these personal memos and then hand them out to your attorneys and hand them out to the press, because of what you feel.

Mike Papantonio:             Howard, Howard Zinn and Chalmers Johnson were brilliant. They thought these types, these types were the biggest threat to democracy. Progressive’s used to believe that, not anymore.