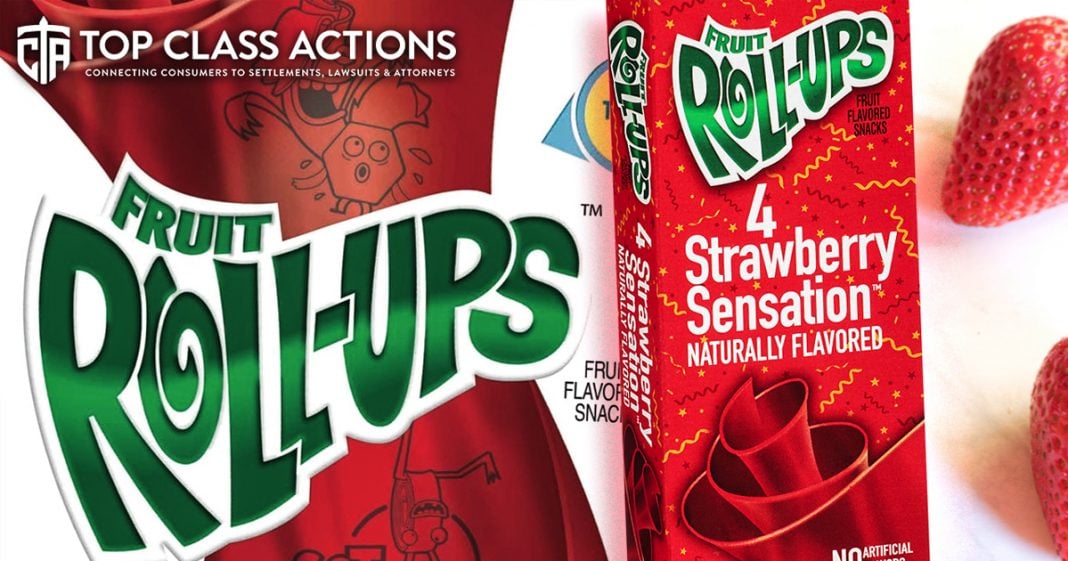 A class action lawsuit claims that General Mills falsely advertises its Fruit Roll-Ups as being “Naturally Flavored” and containing “No Artificial Flavors.” Connie Newman says she purchased Strawberry Sensation Fruit Roll-Ups after seeing the product’s “No Artificial Flavors” and “Naturally Flavored” label. However, after she purchased the Fruit Roll-Ups, she allegedly discovered that the labeling was false, because the product contains a synthetic flavoring compound. Ring of Fire’s Farron Cousins discusses this with Scott Hardy from Top Class Actions.

Farron Cousins:                  For those of you who’ve watched a lot of these segments I do with Scott Hardy from Top Class Actions, you’ve probably heard us talk a lot about malic acid. Malic acid is a naturally occurring chemical found in tons of different kinds of food products, but it can also be made synthetically and in a lot of instances food companies are using malic acid as an artificial flavoring, but they’re still trying to claim that their products do not contain artificial flavorings. And we have yet another one of those today with a fruit roll-up class action. Scott Hardy from Top Class Actions is here with me right now. So Scott, tell us what this class action is alleging about these fruit roll-ups.

But you have malic acid which is used as a flavor enhancer and they are not using this, they are not getting this naturally. They’re actually adding this as a synthetic ingredient to give it that tart flavor and make these things more flavorful. So far on Top Class Actions, we’ve received more than 500 people commenting on this particular lawsuit saying, I had no idea. I buy these all the time for my kids. Add me, include me into this lawsuit because I want to be able to submit a claim because they feel that they may have been duped.

Farron Cousins:                  Well, and that’s just the thing here is, you know, people, parents especially, obviously they go down these snack aisles. If you go shopping with your kids, you know how tough this could be. I want this one. I want this and I want this one. And you try to make them happy, you know, if they need it for school lunches, if it’s just a good, you know, thing for them to have around the house, you want to go for something that’s a little bit more natural, you know, you don’t want to go for the cookies. Maybe this has real fruit in it. Maybe this has no artificial flavors. You’re going to try to do what’s best for your kids and, you know, keep them as healthy as possible while also giving them a treat that they want.

And fruit roll-ups kind of fit in that little niche there. You know, hey, we’ve got no artificial flavorings. It’s all natural. This is a good alternative to some of the other sugary sweets that are all, you know, synthetic. You don’t want this. And that’s why people buy them. At least, you know, based on the comments that this article’s gotten, that’s what people chose. That’s why they chose them. That claim, that all natural claim made people pick this product. So if it’s not all natural, they want 100% were duped by the company’s marketing.

Scott Hardy:                          Exactly, I mean, marketers know this about us. They know that we want to go ahead and get our kids the very best item that we can to keep them healthy. You know, they’re, they’re sitting there, all of our kids now are back to school. They’re in these giant germ factories that we call schools and we want to make sure that they’re staying healthy and they have every little benefit possible, including not putting anything synthetic into their system. So we can’t have companies going ahead and claim that they’re using an all natural flavoring when it’s synthetic and petrol based.

Farron Cousins:                  Absolutely. For more information on this particular issue, follow the link in the description of this video. Head on over to Top Class Actions and while you’re there, make sure you sign up for their weekly newsletter. Scott Hardy with Top Class Actions. Thank you very much for talking with me today.