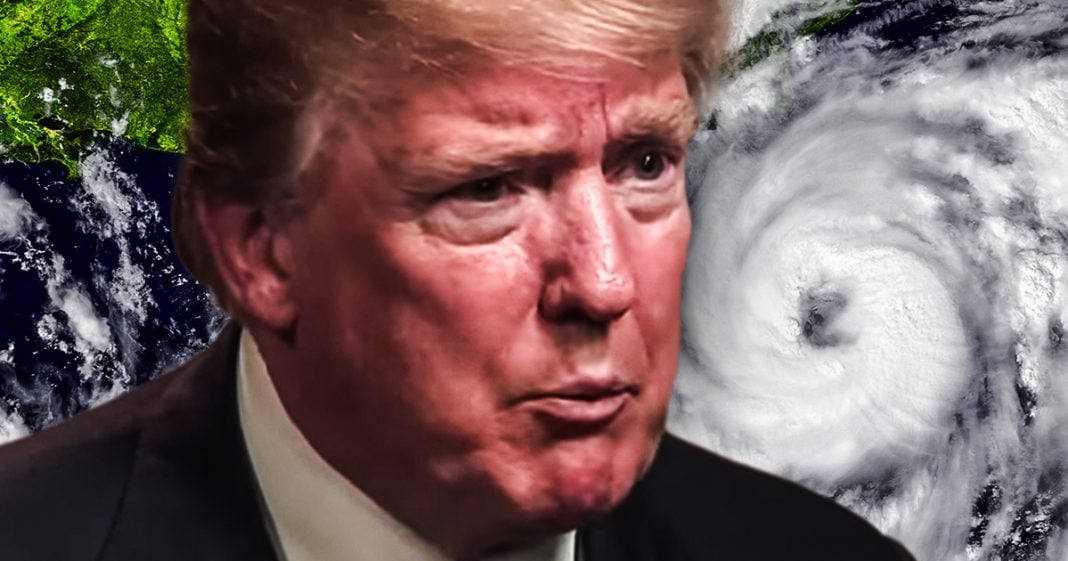 Staffers at the National Oceanic and Atmospheric Administration (NOAA) were warned last week that they are not to give out their own opinions about the projected path of Hurricane Dorian, a move that came just hours after Trump falsely claimed that Alabama was in the path of the storm. Staffers understood that this order was meant to prevent them from correcting the President for his gaffe, showing that the President has managed to erode the public’s trust in yet another government institution. Ring of Fire’s Farron Cousins discusses this.

*This transcript was generated by a third-party transcription software company, so please excuse any typos.
The National Oceanic and atmospheric administration, NOAA, actually on September 1st just a few hours after Donald Trump warned the good folks of the state of Alabama that they were probably in Hurricane Dorian’s direct path, NOAA issued an email to the 300 plus employees at the administration letting them know that, hey, um, if anybody asks you about the hurricane, please only stick to the maps that have been released. That includes everyone with the national weather service, which is a branch of Noah. Do not, do not go out there and give your opinion on this storm. Do not go out there and contradict the president of the United States. Just say, here’s the map and here are the new projections, the latest projections. And of course, the staff at the NOAA all said the same thing. Like this is obviously meant to tell us, hey, don’t go out there and say the Trump’s an idiot. Don’t go out there and contradict him and say that he’s wrong. Because after all, you had the national weather service in Birmingham, Alabama. Come out after the president warned Alabama of them being in the storm path. And, uh, NWS and Birmingham said, no, no, you’re not. Please disregard what the president said. He is totally wrong. And no, of course didn’t want the president to get any more embarrassed so they have to send out this email that’s now been leaked to the press. To put it another way, the president has now politicized the weather.
Donald Trump has absolutely politicize the weather and the government agency that is meant to let us know what’s happening with the weather. This email essentially tells us that we cannot fully trust this government organization anymore. And that’s really sad because even during some of the worst administrations that this country has been through in recent decades, NOAA, the NOAA, the national weather service, that was an area that was typically pretty solid. Right. You didn’t have to worry about politics coming out of the people who track the weather. The FDA Absolutely. EPA Hell Yeah. Politicized to the Max, but not NOAA.
Until now. And for those wondering at home. Yes. The NOAA chief which right now we have an acting chief because Donald Trump doesn’t really like to appoint permanent people. It is a presidential appointed position. So yes, he has one of his little cronies sitting at the top of that organization right now, and they’re the ones calling the shots. They’re the ones helping to politicize this science based government organization because Donald Trump’s ego is so fragile that he couldn’t just come out and admit, sorry, didn’t mean to say Alabama. That’s what’s happening. We are politicizing the weather service because of the president’s damn ego, because he is too proud to admit that he said the wrong word. And now we can’t trust this government agency that’s designed to keep us safe and warn us about deadly weather disasters headed our way, all because Donald Trump is a giant crying, whining, baby man child who can’t ever admit that he made a mistake.