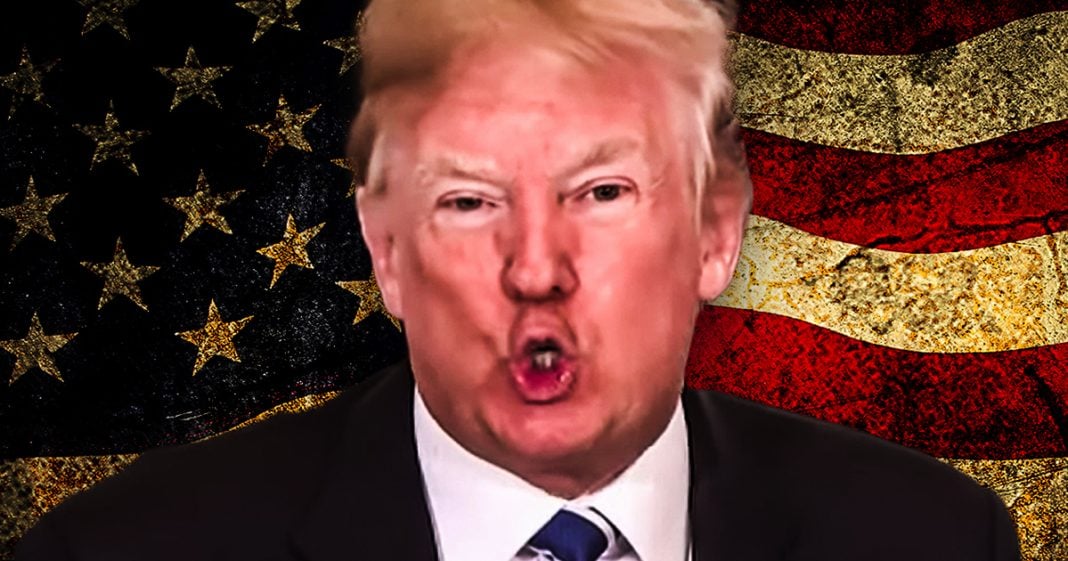 Democrats on the House Judiciary Committee will be voting this week to expedite the impeachment investigation against Donald Trump. Given the recent rule-breaking by the administration, and the increasing volatility of Trump, they’ve finally come to realize that they can no longer ignore the elephant in the room. Ring of Fire’s Farron Cousins explains what this means.

*This transcript was generated by a third-party transcription software company, so please excuse any typos.
Well folks, everybody in Washington, D.C. is back to work today. Finally after their month long August recess and Democrats on the House Judiciary Committee have made it clear that their number one priority at this point is impeaching Donald Trump. And yes, they had started their uh, investigations a while ago. So impeachment is always technically been on the table for Democrats with the House Judiciary Committee, but they send a draft over to the New York Times to let them know what they were going to be working on this week and what they’re working on as a proposal to formalize the investigation, the impeachment investigations into Donald Trump, and to put the administration on notice that from this point forward they will be under the protection of due process, which basically means you’re going to have a chance to respond to this stuff. But we’re going to be calling witnesses, we’re going to be examining evidence and we’re going to be moving forward.
So if you feel like you need to come out and give correcting testimony, you know, try to counter what a witness said. You have every legal right to do that. But if you don’t, you’re essentially waiving your legal right. And that’s what they’re letting them know. And they’re hoping to be able to vote on this proposal in the judiciary committee by Wednesday. They’re gonna finalize it today, hopefully vote for it on Wednesday. And then they are all, uh, cylinders running on this impeachment inquiry into Donald Trump. Well It’s not even the inquiry yet. I guess it’s really just the investigation. And here’s even better news. They’ve said that, you know what, we’re Kinda gonna back off the Trump Russia stuff because you know, you really can’t find stuff there. And even if we did, it’d be really hard to prove. So we’re going to focus on the things that are probably easily provable.
For example, Donald Trump’s hush money payments that were a clear violation of campaign finance laws. We’re going to focus on him enriching himself with the office of the presidency with all these stays at Trump golf courses, all the new revelations over the past three days about the military using a Trump’s golf course out there in Scotland as their little stopover point for the last couple of years. Uh, they’ve got a lot of stuff they want to go on. They also want to look at the fact that he dangled pardons to immigration officials if they broke the law. So they’re really looking at things that are actual legitimately, easily provable impeachable offenses and that’s my favorite part about all of this. They’re getting real, they’re getting serious. They’re not chasing rabbits, they’re not being distracted. They’re not using the Russia talking points. It’s like, Hey, we know this guy’s committed crimes.
We know they’re there. We know the banks know this too, and we’re still working on getting all of that stuff. So there’s lots of, they can go here and these are all areas where they should be going. I mean hell with the Stormy Daniels hush money payment. We know that that happened. Right? We know that that happened. There is an audio tape that we have all heard. There was Michael Cohen’s testimony under oath. There’s the fact that Michael Cohen’s in prison for it right now among a few other things and there’s also Stormy Daniel’s testimony herself. What more do you need on that particular issue? It exists. It is. There it is tangible. It is provable, let’s just do it. And I think they know that too. They want Stormy Daniels to come in and testify. Although that’s really just kind of a formality at this point because I think that file is already ready to go.
Certainly that’s not enough to impeach the man. So you got to build up the other ones as well. But that is what they’re trying to do. And at this point, the only thing that really would stand in their way would be Nancy Pelosi and the democratic leadership. Cause she is still kind of on the fence about whether or not we should even do this, but it’s time. There’s no more being on the fence on this. Right. There’s no more, oh maybe it’s going to hurt us. No. You know what’s going to hurt you in 2020 is showing the public that you were just as complicit with Donald Trump’s activities as the republican congress that you just replaced. That is going to cost you in 2020 yeah, we know Trump’s not going to be fully impeached and removed from office. The Senate would never allow that. We know that, but that doesn’t mean you shouldn’t try. We know that the Medicare for all bills that have been proposed by senators, uh, on the democratic side in the Senate, we know that those aren’t going to pass, but they’re still doing it. To let the public know that this is something I’m very serious about and it’s something that eventually I’m going to make into a reality. And that’s the same message that all democrats in the house have to send with this impeachment inquiry.