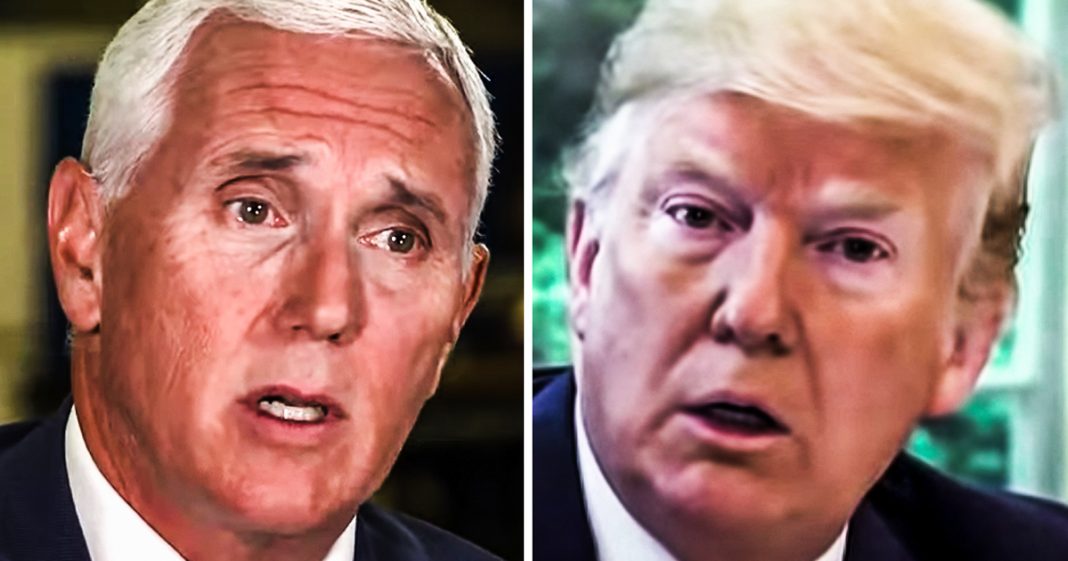 Mike Pence now has a higher approval rating than Donald Trump, and reports suggest that this is creating some tension between the two. This could explain why Pence decided to suck up the President during his trip to Ireland, but even that may not be enough to save him from being ousted on Trump’s 2020 ticket. Ring of Fire’s Farron Cousins discusses this.

*This transcript was generated by a third-party transcription software company, so please excuse any typos.
According to a report by Yahoo News earlier this week, tensions are starting to grow between Donald Trump and Mike Pence. And there’s several different reasons why this is starting to happen, but at the heart of it all is the fact that as it stands right now, Mike Pence, according to the Trump 2020 campaigns own internal polling, Mike Pence is actually more popular than Donald Trump. And that’s not exactly something that anyone working for Donald Trump or hell, anyone working for Mike Pence wants Donald Trump to understand. But he does. And Trump doesn’t like people being more popular than him. Trump doesn’t like someone being liked more than him. And if he’s on the top of the ticket, he should be on the top of the polls. But that’s not way, uh, the way it works right now for him because he continues to say stupid things and do stupid things and act like a crazy maniac all the time.
Whereas Mike Penn’s, who believes the same thing, Trump believes by the way, he’s not saying it out loud, right? He’s just kind of doing his thing behind the shadows. Most people in this country don’t understand how bad Mike Pence is. And so yeah, he enjoys a little bit of a boost in the polls because we haven’t paid that much attention to him. We never knew what the vice presidents, right, it’s the most insignificant yet important job in American history. Nobody cares about the vice president until something happens to the president. That’s just kind of the way it’s always worked historically. And Mike Pence is benefiting from that, but he also knows that it’s going to hurt him in the long run. We have already seen the rumors come out. The stories come out saying, oh, maybe Jared and Ivanka are trying to push Pence out and replacing.
When Nikki Haley, Nikki Haley had to come out and deny that this happened. But Nikki Haley denied it happened before the story even was released. So she knew something before everybody else did. Cause there is internal rumors too, but here’s the thing. It’s not just about the bad polling or it’s not just, Oh, there’s a rumor that he might replace him. According to the people that Yahoo News talked to, which includes both Trump advisors and Pence advisers, Pence advisers are essentially being shut out of conversations now Pences advisers who also serve as some of his biggest fundraisers are being shutout the Trump administration. The Trump campaign is no longer talking to them. They’re no longer working with them. And that’s never a good sign because it does kind of hint at the fact that we don’t want to listen to you because you may not be around next month. We don’t know that you’re going to be here, so we really don’t want to get you involved on this project, only to have to replace you next week. Yeah, that’s really bad for Mike Pence and that’s likely why Mike Pence, when he went to Ireland uh this past weekend decided, oh, I’m gonna stay at Trump’s golf course, even though it’s three hours away from where I needed to be. I gotta make it up to the president. I got to show my loyalty. I got to do something so he doesn’t fire me.
Here’s my idea. If you’re listening, Mr Pence, I know you’re obviously probably a huge ring of fire fan. Um, so here it is. You have a remedy to all of this. It’s called the 25th amendment. You get you, you get a couple of other cabinet members, right? You invoke the 25th Amendment, you force Donald Trump to prove that he is competent enough to be the president of the United States. He can’t do it. So guess what? He gets removed. You Mike Pence become president of the United States and Donald Trump is gone. Everybody knows he’s crazy. Everything is awesome. Really, Mike Pence, you do have the power to do that. You, you could get those cabinet officials his advisors, the uh, you know everybody to go along with this and I’m sure they’d be like, yeah, sure, okay, whatever. And Hey, if he does prove he’s competent enough, which he won’t, um, then yeah, you’re going to lose your job, but you’re going to lose your job anyway.
Mike, go out in a blaze of glory, man. Challenge the power. Invoke the 25th Amendment and say, hell no, I’m not going anywhere. I’m actually taking your job. And now Mike Pence, if you’re watching, go ahead and turn it off cause I have something for our regular viewers. Here’s the thing, guys, I know Mike Pence is absolutely horrible, right? He is just as bad as Donald Trump, just not as brash as Donald Trump. But listen to me on this, Mike Pence can’t win a general election. Mike Pence can’t win in a debate against a Bernie Sanders or Elizabeth Warren or anyone else really on the democratic side, even the worst Democratic candidates, he can’t do it. He does not have charisma. He does not have that energy that Donald Trump, we have to admit he did bring that to the campaign trail. I know his energy is lower now, but he got people riled up. Mike Pence doesn’t have that ability. He doesn’t have the con man in him that Donald Trump does, and he would go down in flames in 2020 so we could suffer through 12 months of Mike pence being president if it ensured that Republicans would lose power in 2020.