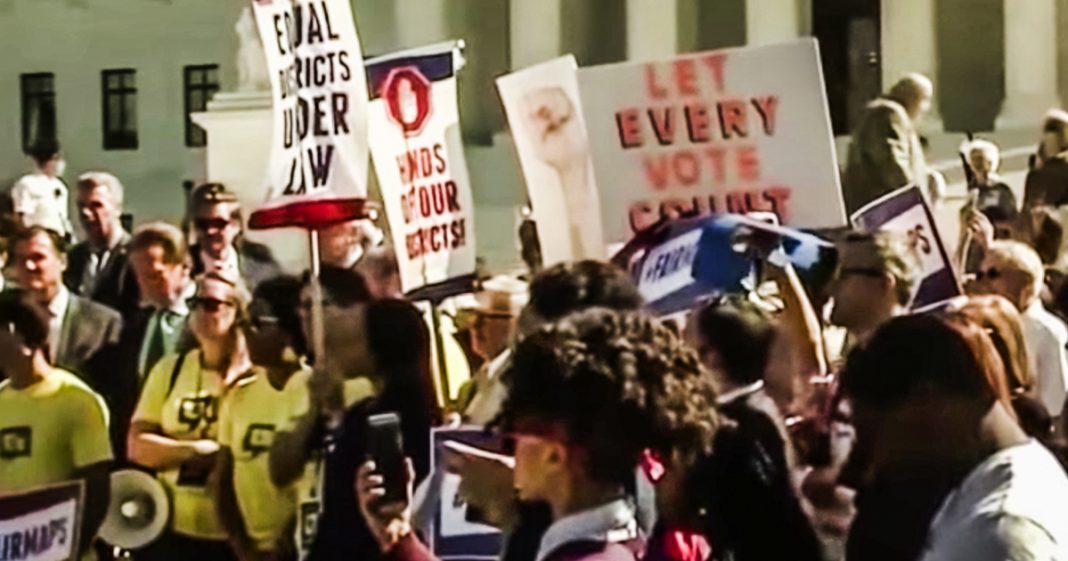 *This transcript was generated by a third-party transcription software company, so please excuse any typos.
Well folks, we actually got some good news from the court system this week. We’re a, a judicial panel in the state of North Carolina ruled that the district maps drawn by the Republican controlled legislature were so grossly gerrymandered that Democrats in the state would never have a chance in another election all because of the way the Republicans had drawn these districts. And so now this judicial panel told these Republicans in the legislature that, hey, um, this is gross. This is awful. You’ve got two weeks to draw them like a normal person and to stop gerrymandering, all of the Democrats into heavily Republican districts. I want to read a little bit here from the actual ruling from this panel itself. This is from the ruling. The effect of these carefully crafted partisan maps is that in all but the most unusual election scenarios, the Republican Party will control a majority of both chambers of the General Assembly.
In other words, the court finds that in many election environments, it is the carefully crafted maps and not the will of the voters that dictate the election outcomes in a significant number of legislative districts. And ultimately the majority control of the General Assembly. Now I know a lot of people out there thinking, okay, well yeah, Republicans are just going to appeal this ruling. They can’t, I mean they can but it’s not going to do them any good. The Supreme Court actually already ruled that, hey yeah, federal courts, we really have no say in uh, you know, district drawing here. That’s a thing that state courts have to decide and, oops, this was a state court and the supreme court already said that they’re the law of the land when it comes to districting. So these Republicans are forced to redraw their districts within the next two weeks and resubmit them because they can’t use their disgusting maps in 2020.
Obviously this is good because North Carolina is shifting. North Carolina is no longer seen as a solidly Red Republican stronghold. The demographics of the state are changing and they’re changing in a way that doesn’t benefit Republicans. And that is why Republicans are trying to Gerrymander the hell out of all the districts because they know if it was a fair election, they’d be gone. And that’s the problem because it’s not just North Carolina. We’ve seen it in Pennsylvania, in Ohio. We see it in Texas. Have you taken a look at Dan Crenshaw’s district? I, I hope we have a picture of this to put up because Dan Crenshaw’s district looks like a fricking boomerang. There’s nothing straight about it. It’s just the weirdest little thing. And they did that. They carved out that little niche for him so that he could be elected. If we had honest maps down there in the state of Texas, Dan Crenshaw wouldn’t exist.
Well mean technically, obviously he would exist as a human being. He wouldn’t exist as a law maker though. And the same goes for lots of Republicans sitting in the House of Representatives today and in their own state houses, they wouldn’t be there if it weren’t for gerrymandering. This country would be a lot different today if it weren’t for Republican gerrymandering. And I know in the past Democrats have done it too, but they’ve lost power for so long, been without power for so long. They haven’t even had the chance to Gerrymander anything in about 20 years. So yeah, right now it is all of the Republicans who are doing this. Eventually the power will shift and I’m sure, and you know, at some point next decade or two, we’re going to have to sit here and talk about Demi, uh, Democrats Gerrymandering, but they’re not the ones who are doing it right now. So that’s why we’re talking about the Republicans, because they know their party is shrinking, they know their bases dying off, and they know they’re not attracting any new young people. So the only way they can keep their power is to just continue drawing these oddly shaped districts that luckily keep getting struck down by the courts.