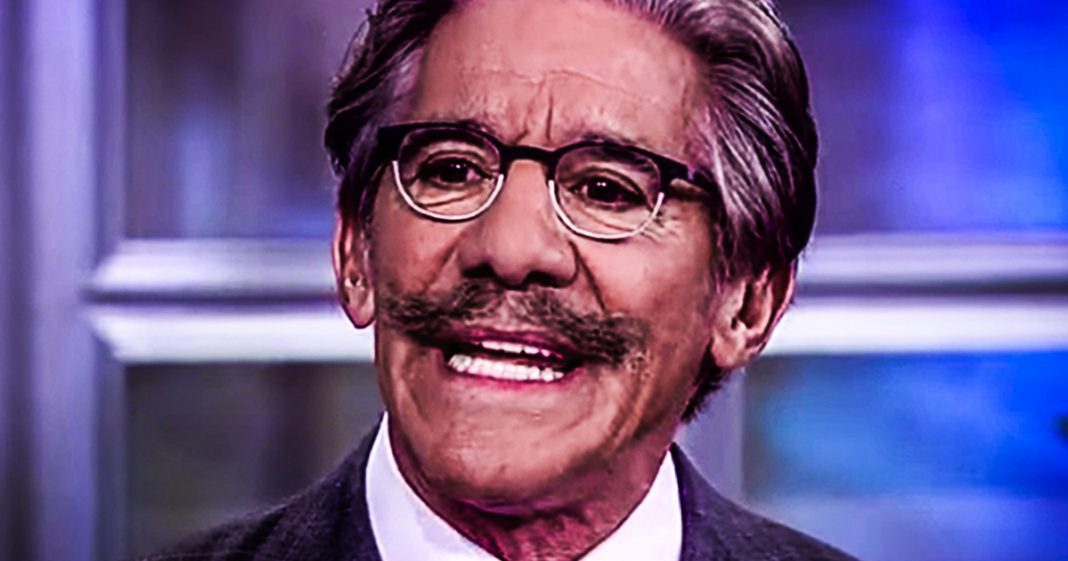 Geraldo Rivera is not happy with the media. But he doesn’t necessarily think that they are “fake,” he just feels like they spend too much time correcting Donald Trump and showing the public how stupid the President truly is. But that is their job – they have a responsibility to explain what’s happening in this country, even if it means that the President looks like a fool. Ring of Fire’s Farron Cousins discusses this.

*This transcript was generated by a third-party transcription software company, so please excuse any typos.
So obviously folks, one of the biggest stories of the past week was Alabama, right? Right. In that direct path of Hurricane Dorian. How will they ever survive? You know, Donald Trump tweeting about it all week. I was right, I was right. I swear to God I was right. You folks are wrong. Your fake news, apologize to me. So on Thursday the Associated Press came out with a really great article called Mr. Never wrong. And it was all about Donald Trump and you know, focused a lot on his doubling, tripling, quadrupling, quintupling down on this lie that Alabama was ever considered to be in the direct path of the storm. Because even the old maps that Donald Trump showed said, oh, you’ve got like a 5% chance of getting 40 mile an hour winds in Alabama at some point. So no, he was wrong. And by the time he even mentioned Alabama, the maps had shifted. Alabama was nowhere near the cone of uncertainty at all, no part of Alabama. But he kept doubling down. He refused to admit he was wrong. And that’s why the AP came out with this story. And for this story, they talked to one of Donald Trump’s buddies, Geraldo Rivera of Fox News personality. And Mr. Rivera had this to say, “this president gets the worst press of any president in the history of the republic. Everything he says and does is crosschecked and scrutinized to reveal him to be stupid, uninformed or a liar.”
shouldn’t you? Shouldn’t you be more concerned about the guy who is stupid, uninformed or a liar instead of the people who say, hold up your stupid uninformed and a liar, Geraldo. Uh, as somebody who spent their entire life in the media and you know, as famously known for getting things wrong, I would think you would understand the role of the media at this point is to get things right.
And it is very telling in a statement here that he’s not mad that they’re lying about Trump. He’s mad that they’re actually taking the time to go through and do the fact checking something Heraldo never, I guess felt like doing during his career. But that is what media outlets are supposed to be doing. Yeah. Sometimes they get it wrong and then they have to correct themselves or else they face massive lawsuits. So yeah, it’s in their best financial interest to get it right. It’s in the interest of their own credibility to get it right. And it’s in the interest of this country for them to call out when the president is being a moron. And Geraldo understands that he just doesn’t like it. You know, he doesn’t think they’re lying about these things. He’s just mad that by constantly fact checking and you know, going back and looking through the records, they, oh no, we made him look like an idiot.
Well, Geraldo. Maybe he is an idiot. Actually. There’s no maybe about it. The an idiot. Donald Trump is an absolute idiot. He is not a smart, educated human being. He has some skills. He’s a great con man. Absolutely a great con man. But that’s not being educated. That’s not necessarily being smart. That’s not necessarily understanding the world around you. It is in fact, a way to manipulate the world around you with is what, which is what Trump has done for this entire week by tweeting nonstop. I was right. I was right. I’m not owned. No. I was right about Alabama. Then Geraldo comes out and says, you Dang bullies in the media making this man look as dumb as he actually is. How dare you? Because at the end of the day, that’s Geraldos beef. Not that the president is stupid, but that the media has shined a massive spotlight on this stupidity for the entire world to see.