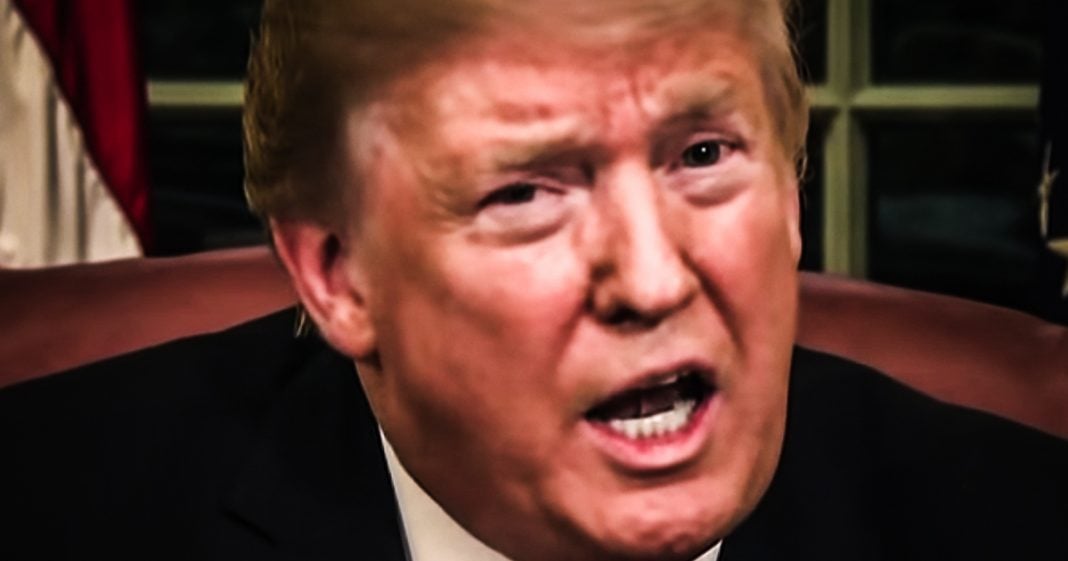 Allies of Donald Trump have announced that they are going to spend $2 million on a campaign to discredit journalists in the US by combing through their social media feeds to embarrass them. This is not a surprise, but really has nothing to do with someone’s integrity as a journalist. Ring of Fire’s Farron Cousins explains what’s happening.

*This transcript was generated by a third-party transcription software company, so please excuse any typos.
So a couple of weeks ago we talked about the fact that Donald Trump’s allies have put together this little operation where they’re basically going to go through the social media feeds of prominent journalists and anti-Trump folks in this country trying to dig up any kind of harmful information that will present a serious ding to that person’s credibility. Um, what we didn’t know at the time in the news that’s come out this week is that this little organization is actually pretty well funded considering what they’re doing. They plan on spending $2 million combing through people’s social media feeds $2 million just to have a couple people looking through a single person’s, you know, Twitter feed or maybe some of their Facebook pictures because they want to feed that information. Then to right wing media outlets like Breitbart, that’s one of the ones they’ve mentioned. So then they can spread it out there and discredit whoever this person is who wrote a negative story about Donald Trump.
Here’s the thing. I remember a few years ago jokingly saying to a group of people, you know, can you imagine how stupid political campaigns are going to be in 20 years when you see all these old myspace photos of people, you know, drunk at parties with a beer box on their head, and that’s going to come up in a campaign and somebody is going to have to explain that away. Yeah, I was wrong. It wasn’t 20 years. It was like three before that started happening because that’s the kind of crap these people are looking for. You know, Ooh, maybe you were, you know, super drunk at a party. People are drawn on your face. Maybe you know when you were 15 years old, you wrote something on Facebook that was, you know, totally not PC. You forgot it even existed, so you didn’t go back and delete it. Well, they found it and now they’re trying to use it to ruin your life. That’s what’s happening here folks. Now
this is weird. Okay? This, this whole thing, because you kind of have to take both sides at this point. Lots of people. Even some of the best people today have said some pretty horribly stupid and insensitive and harmful things on social media. At some point in their life. You just, you have, and most of us forgotten about them, right? Maybe you accidentally said something sexist and you didn’t mean to. Maybe you don’t have any misogynistic bone in your body, but you made a post one time. You were having a bad day. You know, maybe you said something about a different religion that you regret. Well, guess what? That’s what these people are digging for. You know, maybe you’ve got a lot of pictures of yourself drinking with your friends and they’re going to say, look at this guy raging alcoholic. You can’t trust him. He’s probably drunk right now.
And I say that because I know my Facebook feed has lots of pictures of that, but unfortunately all those pictures are over 15 years old. Well, but this is what they do now. This is the new political arena. Everything you say can and will be used against you. Every picture you post is going to be used against you. They’re going to take your quotes out of context. They’ll snip out half of it and leave the rest of it for nobody else to find and they’re gonna use it to ruin people’s lives, ruin their careers, all because they had the audacity to say something not nice about Donald Trump in an article that they wrote. They’ve already gone after people at CNN, they’ve already gone after people at Washington Post The New York Times, they say they’re also targeting folks over at Huffpo. So this is, this is real, this is big and it’s well funded.
And I guess the moral of the story here is that if you’re unsure of what you have on your social media feeds right now, folks now might be a good time to go back through and delete anything that you think could be used against you. It kind of sucks that we have to go through this self-censorship, but at the same time, don’t let everything you’ve built over your life be taken down for something stupid that you said 10 years ago. We’re all different people than we were back then. Most of us have grown and matured and become so much better, but if you’re unsure again, don’t take the risk. Go back through. Make sure everything’s clean. Otherwise you’re just giving them fodder to take something out of context and destroy your life.