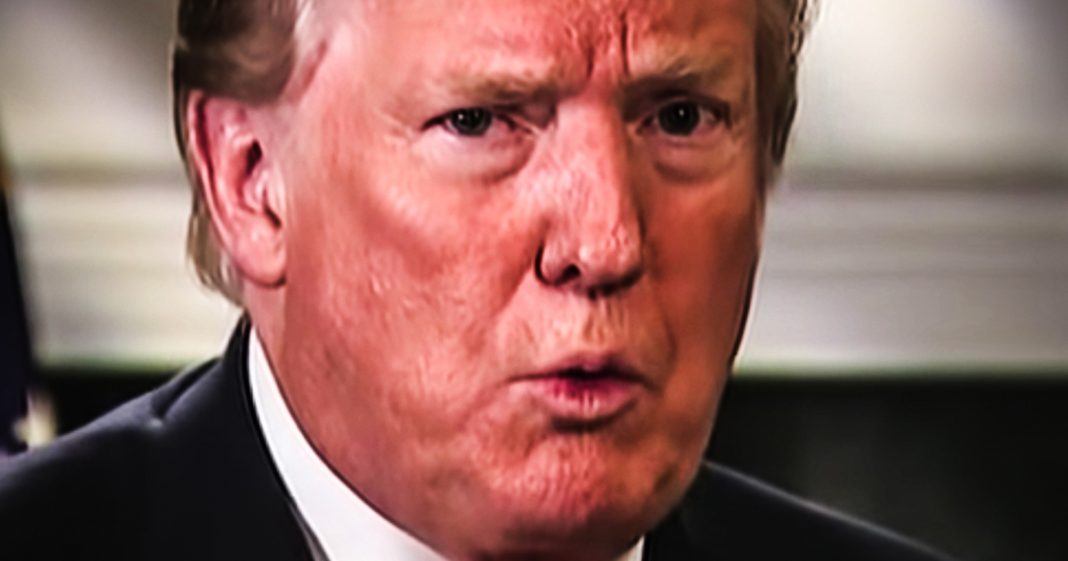 Donald Trump’s advisers believe that he’s done a great job running the country, but they also see his erratic behavior as sabotaging his own reelection campaign. His horrendous comments over the summer certainly haven’t helped his chances, but he seems to think that’ll be what helps him win. Ring of Fire’s Farron Cousins discusses this.

*This transcript was generated by a third-party transcription software company, so please excuse any typos.
Some of Donald Trump’s closest friends and allies and staffers seem to be struggling a little bit with the self awareness. And here’s what I mean. According to a story that just came out on the Washington Post earlier this week, a lot of Trump’s allies and staffers and buddies have been telling him or worried, at least behind the scenes. I don’t know if they’re telling them, but they’re worried about the fact that he’s sabotaging his reelection for 2020 now. They think this because of all the horrible things he did over the summer, right? The, the attacks on the squad, the attacks on Baltimore, the attacks on Elijah Cummings, uh, his, uh, basically barreling us toward a recession because of his doubling down on the trade war. He’s doing a really bad job all over the summer. And they admit that they admitted that to the Washington Post, which shows that yes, to a degree they got some good self-awareness happening, or at least it’s starting to bloom.
But on the other half of that, they also told the Washington Post that in addition to him doing these horrible things and sabotaging his reelection campaign, he’s also been a really awesome president. The economy’s doing great. Economy’s not doing great. I mean, how many more signs do we have to get to show us that we’re heading towards a recession? I know Trump likes to claim that, oh, the media is lying about it cause the Democrats want a recession. Nobody wants a recession. By the way, I know, I think Bill Maher said that, but nobody serious, uh, has any concern about what Bill Maher says, nobody takes him seriously anymore. But we don’t want that to happen because that’s going to mean a lot of suffering for everyone. But Trump is too stupid to be able to prevent it in his aids. Do not yet have the level of self awareness to understand that no, the economy’s not great now.
The economy was never great for the working class. The economy wasn’t good for the working class during the Obama years and it’s just gotten worse since then. You know, we, we’re the, the demographic that really still hasn’t recovered from the recession, still still trying to build that back and these staffers are sitting there telling the Washington Post, Trump should be out there telling everybody how great everything is because he’s done a wonderful job. So that’s why I say these people only have a little bit of self awareness because they understand that, yeah, Donald Trump’s horrid attacks on fellow lawmakers is going to cost them dearly. Polls show that people, yeah, they’re not really on his side with these tweets in these attacks. They don’t like it. But they also understand that Donald Trump is the one leading us towards a recession. He is the one who is not paying attention to the issues that matter to average American citizens.
So yeah, Donald Trump may, as these aides point out, be kind of sabotaging his own re-election chances. But the other side of that is that Trump thinks he’s doing the right thing. He thinks that these attacks are going to help him win in 2020 he thinks they’re going to get his base riled up, not even realizing that his base is shrinking every day. Fewer and fewer people in this country are willing to hop on that Trump train and put on those MAGA hats. So Trump is playing to an ever decreasing base who with all these tweets and these attacks on people of color and he thinks it’s helping his aids understand it’s not, but his aids are still too clueless to understand that he hasn’t enacted any policies that help average American citizens. So where does everybody else go? They’re getting turned off by Trump. His aids don’t have the self awareness to understand that.
Yeah, this is bad all around, not just the tweets. So these people are going to go to somebody with a policy. These are gonna. People are gonna go to somebody with a plan. These people, some of them not all, of course, are going to go to the democratic side if the Democrats play it smart and always have to throw that caveat in there whenever we talk about this, because as I’ve mentioned, Democrats are awesome at screwing things up and losing elections, right? Even when they’ve got the wind at their back, they can still find a way to fall flat on their face. And if you put somebody like Joe Biden in there against Donald Trump, hey, welcome to four more years of Donald Trump. I fear the same thing with Kamala Harris. I feel the same thing with the Pete bootedjudge. I feel the same thing with Andrew Yang.
I think there’s two candidates right now who have a good, good chance of actually beating Donald Trump. That’s Bernie Sanders and Elizabeth Warren. I think Bernie would beat him better than Warren would, and I know polls right now. Show Biden, Harris, Bootyjudge, Sanders, Warren. They all beat Trump right now, but that those numbers are gonna Change and they’re going to change, not in the Corporate Democrats favor, but those people out there pushing policies, they’re the ones who are going to attract these disaffected Trump voters who want something better for themselves, but finally understand that the Republicans are never going to give it to them.