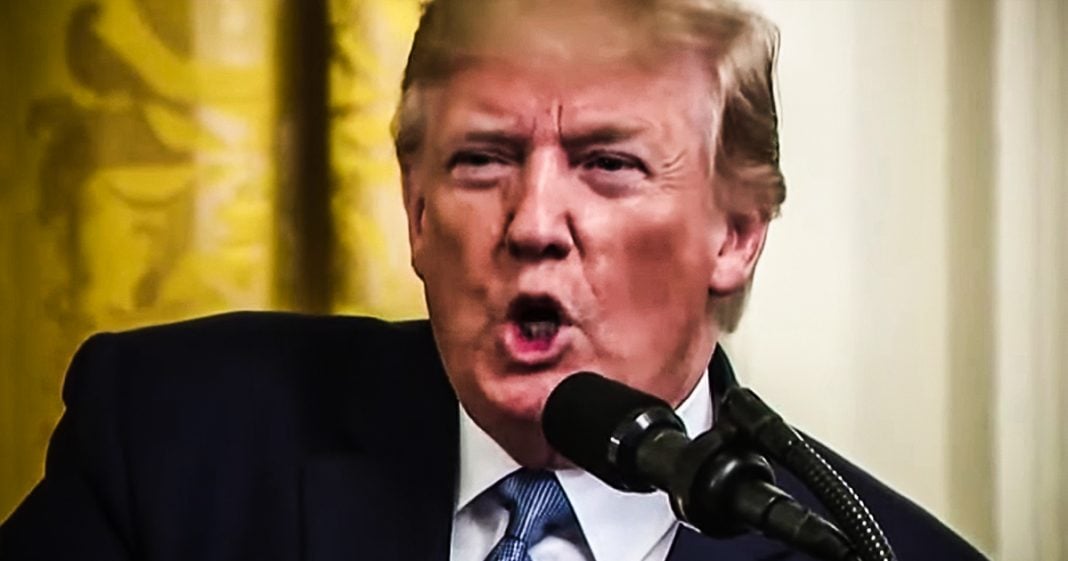 At least four states have already announced that they will not be holding any primaries or caucuses for Republicans in 2020, a sign that they will not even let their constituents decide whether Trump should be the nominee for their Party. This is incredibly undemocratic, but more importantly it shows that Trump has completed his takeover of the GOP. Ring of Fire’s Farron Cousins discusses this.

*This transcript was generated by a third-party transcription software company, so please excuse any typos.
As Donald Trump’s primary challengers start to get a little bit more press for different Republican controlled states are taking steps necessary to basically say, guess what? We’re not going to have a primary or a caucus in our state in 2020 so good luck securing the nomination and unseating Donald Trump, those states are right now South Carolina, Nevada, Kansas, and Arizona, uh, are on the verge this coming weekend, likely going to pass a resolution that’s gonna prevent any primary or caucus from happening in their state on the Republican side. And again, this is all 100% to protect Donald Trump, but it’s not an accident. They didn’t just come up with this idea like, hey, what if we just did this? Now, here’s what’s been happening behind the scenes for quite some time at the state level, within the Republican Party and the State Republican parties, Donald Trump’s administration has been strategically working to put their people in positions of power in these states.
They’ve been shutting out the, uh, establishment republican types. They’ve been putting in their people, the pro Trump people, you know, the Trump or dye folk, and they’re the ones who have been pushing these policies and these are not the only four states where they’re pushing them. And this could easily spread as this year winds down and it likely will if any of these a Trump challengers appear to be gaining any traction, which right now they’re not. Okay. This isn’t going to affect anything because none of these folks have a chance in hell of ever unseating Donald Trump as the republican party’s nominee. But this does destroy the process. People should have a say even if they’re Republicans, Republicans in your states, and I’m not talking about the people making these decisions. I’m talking about the people who go to work just happened to be a republican. You folks should be outraged by this. They’re quite literally taking away your choice, even if your choice is for Donald Trump, they’re taking that away from you. They’re saying that in this primary process, you don’t get a say. And that’s never okay. I mean, we went through all the shenanigans of the DNC in 2016 but now we’re starting to see it play out in the RNC in 2020 they’re canceling it because they don’t want you to have a voice. And yes, I know historically Democrats have done this too, and they did it in 96 they did it in 2012
wouldn’t have changed anything, but it still took away people’s voices. And that’s never okay. You know, these primaries are supposed to truly be a democratic process, right? This isn’t the Democratic Republic of the Electoral College. No, no, no, no, no, no, no. Now, how this works, this is purely democratic and you’re taking away these people’s right to vote in these primaries because you don’t want some outsider challenging Donald Trump. And there’s another side of this story here too. As I mentioned with Donald Trump, putting his people in place to make these things happen. He’s taken over. The Republican Party of even five years ago is dead. It is now the Donald Trump party, 100% this man has taken over. Those in power have allowed it to happen or were powerless to stop it and now they have to go along with it. This is the new normal for the Republican Party. They have no intention of coming back from the damage that Donald Trump is doing to them. Some of these people that Trump has put into power within the RNC are likely to still be there after he loses power and it’s just going to perpetuate itself. You’re going to have an entirely new Republican party modeled after Donald Trump that with any luck won’t survive for another generation.