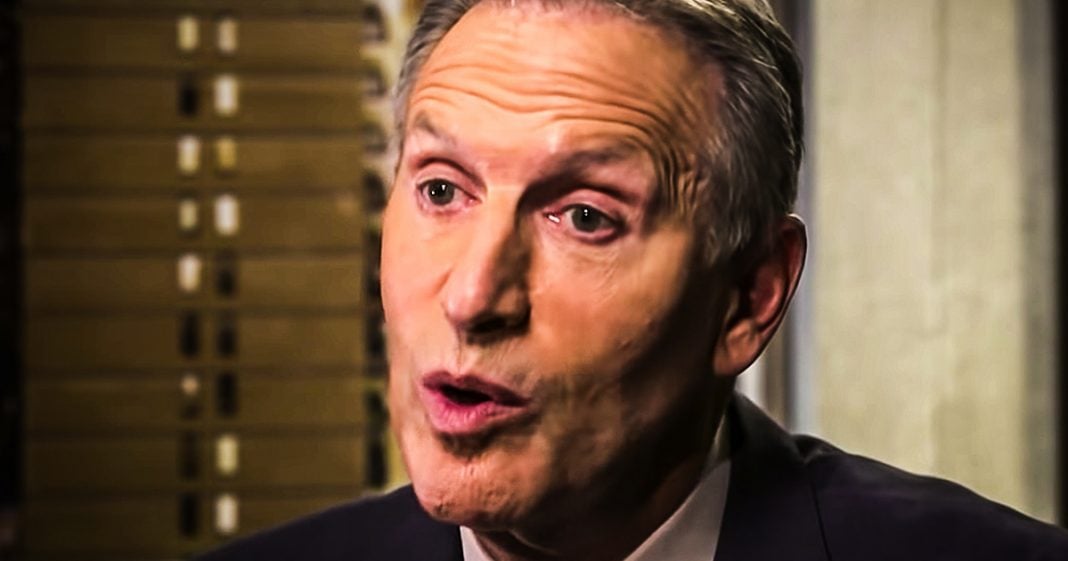 Billionaire and former Starbucks CEO Howard Schultz announced on Friday morning that he was no longer running for President. The public immediately responded by asking “wait, this guy was still running?” Everyone forgot about Howard Schultz, and he won’t be missed by anyone. His campaign of mediocrity was doomed from the start, as Ring of Fire’s Farron Cousins explains.

*This transcript was generated by a third-party transcription software company, so please excuse any typos.
Well folks, we get some very sad news this morning. Uh, on Friday, Howard Schultz, the billionaire, former CEO from Starbucks announced that he was ending his presidential bid. He will not be seeking the presidency in 2020. Um, which actually prompted most of the public to say who, oh, that is, he’s still running. Really thought that ended months ago because to be honest, it effectively did end months ago. Howard Schultz back in April suffered a back injury over the summer. He went through three different surgeries, hasn’t done any campaigning since then at all, you know, because of the surgeries and the injury. So today, finally in September, he says, listen, I’m done. I don’t need to do this anymore. I think we’re going to be okay. Plus of course, I don’t want to be the centrist guy running and saying, oh, vote for me instead of the Democrat or the Republican.
And then ended up splitting the vote causing Donald Trump to get reelected. So super admirable of this guy, right? Maybe not, as a people on Twitter have pointed out. Perhaps it’s because Mr Schulz who only got into the race because Joe Biden had not yet, thinks that Joe Biden has this thing on lock. And I’m sorry that that made me laugh because thinking that Joe Biden has this primary on lockdown is one of the most ridiculous thoughts ever. But it wouldn’t surprise me if Howard Schultz does in fact have this thought, or maybe he thinks it’s going to be Kahmilah Harris, right? You know, two good corporate centrist Democrats promising not to raise taxes on the wealthy elite like Mr. Schultz himself, promising to keep things just the way they are except maybe not put kids in cages down on the southern border. And that’s actually a pretty big, maybe because some of these centrist Democrats, hell, let’s not forget, Joe Biden was part of the administration that actually started doing that.
So little chance he’s going to reverse the Trump administration’s policies. It’s just that unfortunately, some of the liberal media out there may not pay much as, uh, as much attention to it. But here’s the thing. Nobody cared that Howard Schultz was running and he was running to protect his own selfish, selfish interests. That’s what this campaign was about. He didn’t want to pay more money in taxes. He saw Bernie as a threat. He saw Elizabeth Warren as a threat. He saw Joe Biden, Camilla Harris, those folks. He saw them as allies. Those are the people he wants on his side, and those are the people. He wants to become president of the United States because he knows that they may do some things on social issues, but when it gets right down to it, they won’t touch any of his money or make him pay an extra dime in taxes.