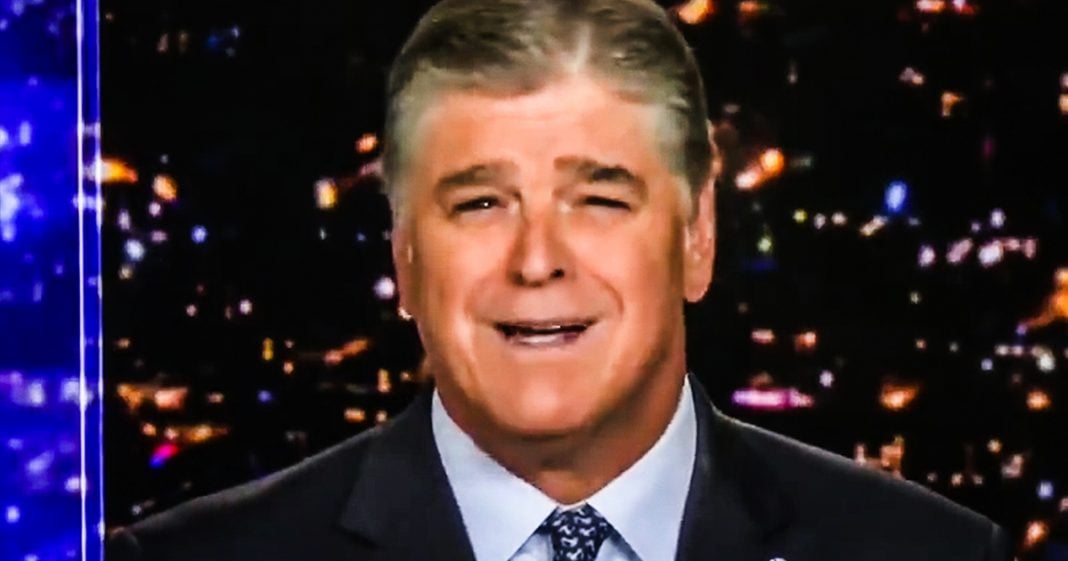 Sean Hannity is sick and tired of people making fun of his friend Donald’s intelligence, and he let them have it during a rant on Thursday evening. Hannity concluded by calling members of the media who are critiquing Trump “psychotic jackasses,” showing how angry and unhinged this man is truly becoming. Ring of Fire’s Farron Cousins discusses this.

*This transcript was generated by a third-party transcription software company, so please excuse any typos.
You know, you kind of have to admire Sean Hannity’s a loyalty to his friends. I mean after all isn’t that we all want in friends. Somebody who’s just going to be loyal, take care of us, have our back when we need them too, because that is exactly what Sean Hannity is for Donald Trump and this week as the media was hammering home the point that Donald Trump is a blithering idiot. Sean Hannity was right there to defend his best buddy. Take a look.
[Oh, look at that.
That’s from my thing. August 29th and 30th proving the president. What he said about the earlier models about Hurricane Dorian that it might hit Alabama is true, but if you watch the media mob, you would think the president was lying as they always do. Just another absurd example of Trump derangement syndrome. Take a look.]
[The White House is falsifying weather reports so that it doesn’t have to admit the president who spent the weekend golfing was not up to date on the storms forecast. Donald Trump is not the sharpest sharpie in the drawer. Let’s really fits a pattern of the president putting out misleading information. The initial reaction is to laugh out loud is laugh out loud funny. It’s so absurd, but the other aspect of it borders on being truly dangerous. The Democrats keep looking for an impeachment inquiry to go, this is actually against the law and this might actually be crumbs for them to say, wait a second, you know,]
[well, that’s right there. A lot of psychotic jackasses in the media mob. I’m sure we’ll get there. Apology, that’ll be forthcoming. Wish I had time to name every name.]
Now if you are paying close attention, you’ll notice that yes, somewhere in that clip we just showed there was a psychotic jackass, but the psychotic jackass was not included in the clip that Hannity showed because it was actually just Hannity himself. This defense of the president on behalf of Hannity is just reaching absurd, almost comical levels, but it is nice to see that Hannity finally snapped. I mean, that’s what happened. At the end of that clip, the psychotic jackasses in the media, Ma, you snapped, you’ve lost it. You have officially become unhinged. Not that you were necessarily hinged before that, but yeah, you’ve kind of hit a new level of desperation and it reeks. We can see the stench of desperation coming off of you because you know that everybody else is right in this particular situation. Hell, even Eric Trump yesterday tried to come out on Twitter and defend his daddy and say, oh no, here’s a map.
It shows my dad was right. Yeah, listen to idiots. The map, the map, the one map that had it, oh, maybe it’s going to go to Alabama was when the storm was way the hell out there in the Atlantic Ocean. That was just one prediction out of many and they corrected it, revised it two days. Two prior to Donald Trump tweeting out that Alabama was in danger. Two days he had 48 hours of new maps. All he had to do was admit shortly after, oh, I’m so sorry. I was looking at an old map. You know, they had not briefed me. Maybe I was too busy playing golf all weekend, which is actually the truth. You are too busy playing golf. You weren’t paying attention to what was happening and you got caught with your pants down essentially because you didn’t know what was going on. And now Hannity four days later finally has to come out, loses his mind on television in front of millions of people trying to defend you.
And again, that’s a loyalty that a lot of us would like to see in a friend. Unfortunately, it’s a personality that none of us want in a friend, you know, honest to God. I look at Sean Hannity and doing these shows and and watching how he is just as a person. When was the last time this guy was happy? Like when was the last time he genuinely enjoyed his life? He seriously just goes out there every night being super angry, hating everything, defending a man. He know is is indefensible, but he has to do it because that’s his friend and he thinks that somehow he’s going to hitch his wagon to Donald Trump and it’s going to save him in the future. Well, it’s not Sean, you got to give it up, buddy. You really lost your mind last night, but maybe you could still come back. Maybe you could understand that it doesn’t have to be this way. You don’t have to lie for money, but at the same time, that is what you do best, and you do seem to really enjoy the money and the influence that you have. So I seriously doubt you’re ever going to stop. You’ll continue to double down on this. You’ll defend the president’s horrible, stupid comments, all because that is what fills your bank account.