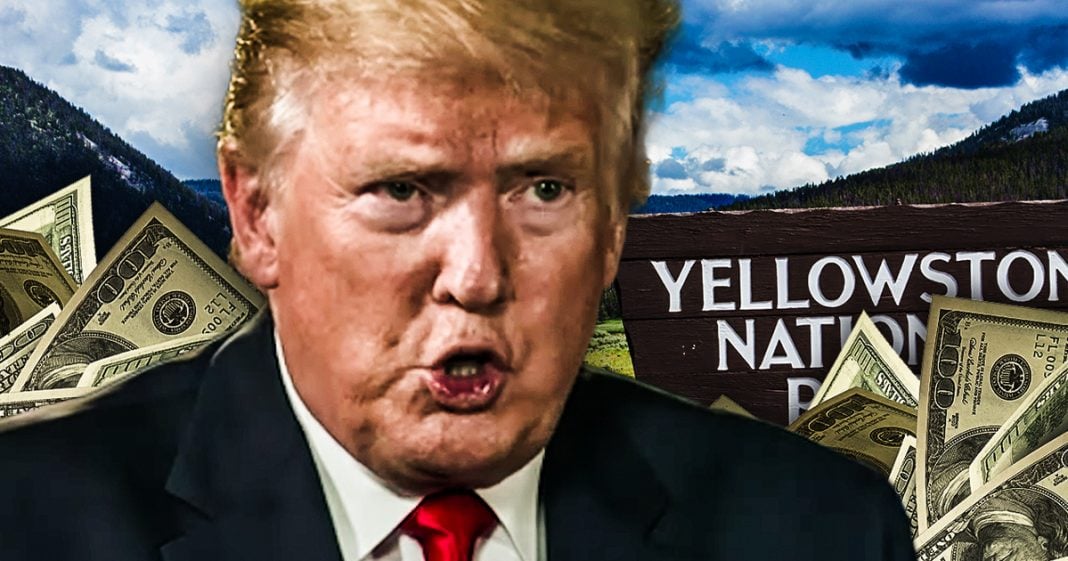 The Government Accountability Office released a report on Thursday claiming that the Trump administration broke the law yet again. This time it was the Interior Department and the National Parks Service who used entrance fees that had been set aside to keep the parks running during the government shutdown earlier this year. That may seem like a good thing, but Ring of Fire’s Farron Cousins explains why it is illegal.

*This transcript was generated by a third-party transcription software company, so please excuse any typos.
On Thursday, the Government Accountability Office released the results of an investigation they had been conducting for quite some time, showing that once again, the Donald Trump administration broke the law, specifically the Interior Department and the National Park Service broke the law earlier this year during the government shutdown when they took a funds from park fees, roughly 250 million of it. And they use that to keep some of the most popular national parks in this country operating during the government shutdown now on it’s a on its face here that that actually seems like a good thing, right? You know, we don’t want the national parks to shut down. We want the workers to continue to get paid. It’s not fair to them that they get furloughed. And so they took some of the money and they paid a couple of people at some of the parks to stay open, clean the bathrooms and a, you know, take out the trash essentially is what the report says.
They weren’t paid very much and it certainly wasn’t even a majority of workers who still got paid. You know, they wanted people to keep their vacation plans. And be able to go to these national parks. The problem is where the money came from. Actually, let me take that back. The problem is it was still illegal. It doesn’t matter. You know what your intentions were. If you wanted people to not see how bad the government shutdown was, which is exactly why they did this, um, it doesn’t matter. That’s illegal. You cannot do that. That we have a thing that is called the Anti Deficiency Act and the GAO says that this anti deficiency act was absolutely violated by the Trump administration and because congress did not approve the use of these funds, it’s illegal. You can’t do it. You robbed your own agencies in order to keep them open for a little bit longer, $250 million and that $250 million came from things like upgrading national park facilities, paying the firefighters who have to go out there and monitor things and keep them safe.
So no, once you dig past the surface, it does not look like a good thing because what you did was you kept them open for a couple of weeks at the expense of possibly destroying them in the future. And of course, again, that’s illegal, but you did it anyway. You know, we’re really starting to see this pattern develop with quite literally everything this administration does. They either don’t care about the rule of law or they’re too stupid to take the time to look up and see what the law actually says they can or cannot do. Either way, it’s a bad scenario for the American public. It’s a bad scenario for the future of this country. When you have an administration that again is either willfully breaking the law at every possible turn or doesn’t have a single person in it, smart enough to say, hey, we can’t do this because it’s illegal and I don’t care if you agree with this law, the Anti Deficiency Act or if you disagree with it, that doesn’t matter. Still the law and you can’t break it, but according to the GAO, the Trump administration 100% broke the law again.