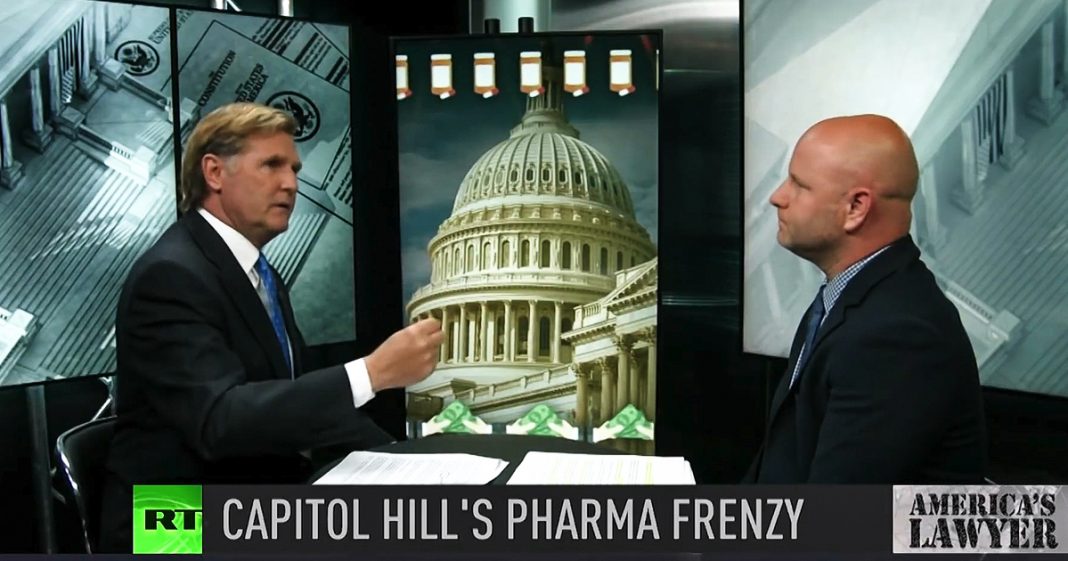 Mike Papantonio:             Drug companies are afraid that their profit party is coming to an end. So what they’re doing now is they’re trying to put together a lot of money to try to stop it. And they are raising some serious money aren’t they? Tell us about this story.

Farron Cousins:                  Well, this is, you know, very expected, I guess you could say, but right now you have all these major drug companies and they are in full blown panic mode. They see a sea change happening in this country on the political level and they’re absolutely right about it because when you look at the old guard, the people they are actually sending the money to, it is Nancy Pelosi. It is Mitch McConnell. They’re, they’re playing both sides as they always do because they know that these ingrained establishment politicians are never going to take on the, the, the power of Big Pharma. But those people don’t have much time left in DC and they know that you’ve got a lot of people today, on both sides, who aren’t going to be bought off. They see the polls, they see people having to cross the border to get insulin and they know that this is not good for them.

Mike Papantonio:             Okay. We, we know the story about how Republicans got so much in bed with, with the pharmaceutical industry. We know that story has been out there a long time. The, the numbers that they spread around with Republican politicians were staggering. Okay. Let’s tell the rest of the story though. Bill Clinton comes into office. Bill Clinton says we have to reach across the aisle and we have to make nice with Wall Street, otherwise we’re not going to be able to raise money. So making what and making nice with Wall Street was making nice with the pharmaceutical industry. The best story that tells that really shines a light here is Corey Booker. Okay. You remember last year, last year, Cory Booker, single handedly defeated legislation that would have allowed us to import drugs from other companies, from other countries at a 10th of the price that people are paying. Corey Booker, the guy running for president, who’s he talks like he’s a man of the people. He single handedly gathered together 16 Democrats, we did this story. You remember?

Mike Papantonio:             The 16 Democrats, there’s no surprise, they’re all Wall Streeters. He gathered them together and he defeated that legislation. So where do Democrats fit in this time?

Farron Cousins:                  Well, basically the same way. You’ve got a lot of people like Corey Booker out there. Corey, Corey Booker took a lot of heat for that and so he, he’s tried to play it with the, oh no, no, no, I, I absolutely want to lower prices. This just wasn’t a good idea. No, he understands a lot of drugs in this country are manufactured in his State of New Jersey. He’ll never go against them. It doesn’t matter what he says. He can go out there and give a flowery speech and say, we’ve got to do something. People are dying because of drug costs.

Farron Cousins:                  He absolutely is. It’s amazing actually how bad he’s done considering the hype around him to begin with.

Mike Papantonio:             This is an issue. You got elderly voters there in his, around his home. They’re saying, look, we know what you did and, but here’s the rest of the story, drives me crazy. We know that Republicans have been doing this a long time, but at some point don’t the Democrats owe consumers to say, we’re going to draw a line in the sand. No, you may not do this. Here’s what’s so crazy. All of a sudden Trump is on this bandwagon. Trump is going after the pharmaceutical industry. So now we see the pharmaceutical industry loading up on Democratic candidates.

Farron Cousins:                  Yeah, and what we have, well, what we’ve had, I guess, is in the past, the drug companies, the lobbyists spending, it was almost equal. Even in the years, you know, oh, Republicans take so much. Democrats were only a little bit behind them there and they still are. And so when they look at somebody like a Bernie Sanders or an Elizabeth Warren.

Mike Papantonio:             I mean, my God, you would think that they’ve put a funnel, the pharmaceutical industry has put a funnel in, in Charlie Schumer’s mouth and are just dumping in more money than they can spend. Look, here’s the real ugly, people see the stories, the stories that you do. You’ve done a dozen of these stories where the pharmaceutical industry is making 100000% markup on their pill, 100000% that’s, and it goes on every day and we allow it. Congress could do something about it, they refuse to do anything about it because the money is so big, both on the Republican and Democrat. So all of these Democrats that are saying, oh, we have the high ground, we’re different. That is absolutely absurd. It’s ridiculous.

Farron Cousins:                  Right, too, too many of them are paid off. And, you know, we did see, which we had discussed, the Trump administration was trying to get it to where they had to post their prices on the drug ads on TV and then the courts came out and said, no, no, let’s not do that. And that was an Obama appointed judge who said that. So this is not a left versus right issue. This is a Big Pharma buying congress versus what everybody in the public actually gets.

Mike Papantonio:             Yeah, let me tell you the biggest lie ever told by pharmaceuticals. There’s a lot of them because we go toe to toe with them all the time. One of the big lies is, oh, we need these markups because R&D. No, all the numbers are in our, you know what the big, what the big cost is? It’s not R&D, it’s advertising.

Mike Papantonio:             It’s so when you turn on the television every 10 minutes, you have a new ad about something that’s going to make you smarter or happier or whatever. And so they’re spending so much money that this markup thing has nothing to do with R&D. Actually, universities, taxpayers pay for most of that R&D anyway. Farron, thanks for joining me. Okay.