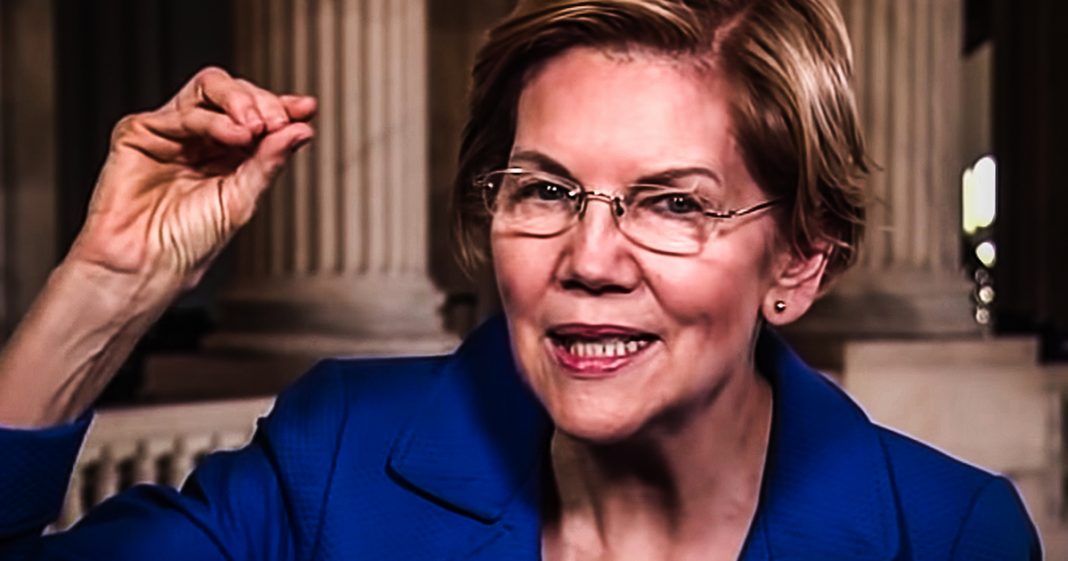 According to New York Times reporter Maggie Haberman, Donald Trump might not see Elizabeth Warren as a threat, but his advisers certainly do. They believe that Warren’s broad appeal among both progressives and establishment Democrats can give her enough traction to take Trump down in 2020, and they likely could be right. Ring of Fire’s Farron Cousins explains how Warren can capitalize on this while also fixing some of her biggest campaign problems.

*This transcript was generated by a third-party transcription software company, so please excuse any typos.
According to the New York Times reporter Maggie Haberman, who has been covering the Trump administration since day one for the publication. Trump’s advisors are not necessarily as worried about Joe Biden and Bernie Sanders as they are about Elizabeth Warren. According to Haberman, these advisers, the people telling Trump what to do for the 2020 election. No, their biggest concern right now is Elizabeth Warren. Now, Trump seems to think according to Haberman, that Elizabeth Warren is not a threat. He thinks he can occasionally tweet out the word Pocahontas and everything’s going to be okay. That’s going to be enough to undo her entire campaign. But his advisors know better. They see Elizabeth Warren not just as a real threat, but again as the biggest threat to Donald Trump. And there’s several reasons why. First and foremost, Elizabeth Warren, not unlike Bernie Sanders has a ton of grassroots support and that grassroots support is what is propelling the campaign. Again, just like Bernie Sanders.
So the people on the ground support her, but the bigger issue they have, the reason they are afraid of her is because she might be one of the only top tier candidates that can actually appease both camps. You know, the, the progressive’s and the establishment. Now, in recent days, Elizabeth Warren has said some things that have greatly concerned me as they have many other progressive’s, you know, starting to say everybody should have access to quality healthcare. That word access is like nails on a chalkboard because it is in a way a walk back of Medicare for all, or at least it gives the appearance of being a walk back. Maybe she still supports it. Maybe she doesn’t. She doesn’t necessarily think we should ban all fracking in the United States, which Bernie Sanders does and he’s correct. We need to. But overall, Elizabeth Warren is the second most progressive person running for president today and she’s got a really good record to back it up.
She also isn’t too progressive to turn off. You know those corporate Democrats who want to make sure that Wall Street gets their tax cuts, but that were good on social issues. So Elizabeth Warren, according to these advisors, may be the one to kind of bridge the gap. We can get some progressive, the progressive initiatives, not all of them. We’re going to stick it to corporations, but not as much as we should be sticking it to them. And that’s kind of where Elizabeth Warren Falls. You don’t get me wrong folks. I Like Elizabeth Warren. She is absolutely in my top two and that’s why I fall into this next number as well. And this is the number that scares Donald Trump’s advisors, 57% that is the number of Bernie Sanders supporters who say that they are perfectly fine if Elizabeth Warren becomes the nominee. 50% of Joe Biden supporters say the same thing, but more Bernie supporters then Biden supporters.
Totally cool with Elizabeth Warren being the nominee. And again, I am in that 57% Elizabeth Warren is kind of the the bridge of the gap. She may not be all that we need right now though. You know, if she was running in 2016 this would be a slam dunk. Bernie would not have gotten in that race. Folks, if Elizabeth Warren had run, he waited. He essentially waited for her and when she wasn’t gonna do it, he decided to do it himself and created a massive movement in the process, a shift within the Democratic Party that continues to pull us to the left today. I’m glad he’s running now. I am backing him right now, but if he were to drop out or not, when I hope to God the person that ascends to the top would be Elizabeth Warren and the Trump advisors understand that because I’m not alone, I’m not.
You have a lot of Bernie supporters from 2016 who are backing Elizabeth Warren this time round. You have a lot of establishment people who hated Bernie in 2016 who are supporting Elizabeth Warren this time. She is a very real threat to Donald Trump. The only question is can she stop making these unforced errors, stop walking back her bold, progressive ideas and finally get on board and say, you know what? No more of this access talk. We’re going to do medicare for all, and we’re going to do it in a snap. We’re going to ban fracking, we’re going to tackle climate change, and we’re going to make corporations pay for all the crimes they’ve committed over the last few years. She does that then. Hell yeah. She’s the biggest threat Donald Trump will ever face in his lifetime, but if not, his advisers might be worrying about nothing.