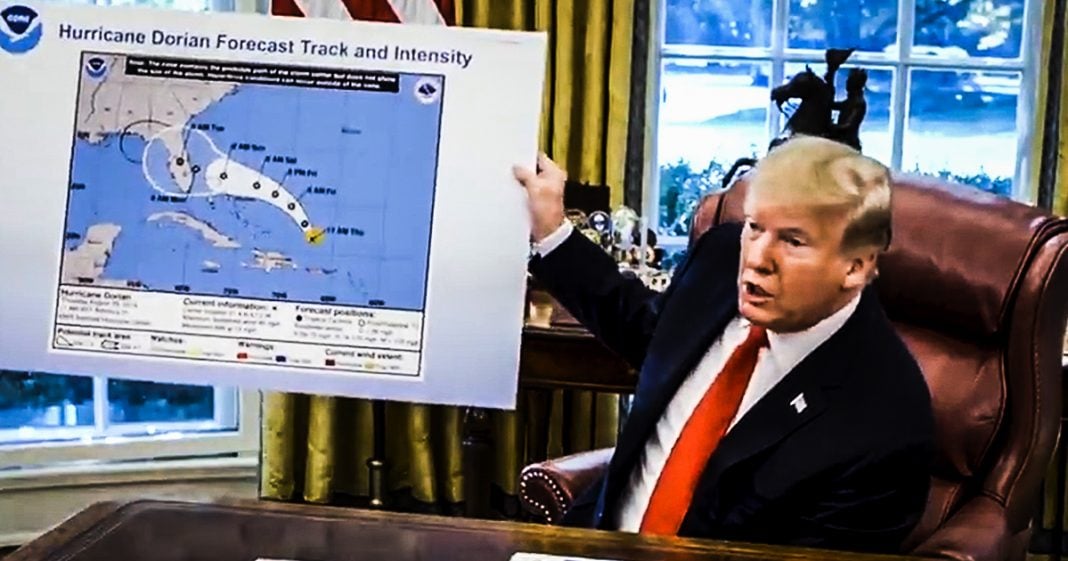 Donald Trump has a really hard time admitting that he was wrong, and he’s willing to do whatever it takes to avoid admitting to a mistake. On Wednesday, Trump displayed an altered hurricane projection map from the National Weather Service that had clearly been altered by someone in the White House with a marker in order to make it seem like the President was actually correct when he said that Hurricane Dorian could hit Alabama. Ring of Fire’s Farron Cousins discusses this.

*This transcript was generated by a third-party transcription software company, so please excuse any typos.
On Sunday as Hurricane Dorian was making its way to The Bahamas about to maybe make that northward turn. Donald Trump tweeted out that, oh no, Florida, Georgia, the Carolinas and even Alabama were in the path of this storm and that took everybody by surprise, the National Weather Service in Birmingham, Alabama had to immediately come out and issue a statement saying, no, no, no, no, no. Alabama residents, please stop freaking out. Nobody in this state is in any danger from Hurricane Dorian. So Trump got ridiculed for it. People mocked him, and they rightfully should. I mean the guy spent his weekend golfing instead of paying attention to where the storm was going and he screwed up. He was wrong, but he wasn’t about to admit he was wrong. And then yesterday this happened.

[going to be hit hitting Florida directly. Maybe I could just see that Kevin it was going to be hitting directly and that would have affected a lot of other states, but that was the original shot going to hit, not only Florida, Georgia could have going towards the Gulf. That was what we originally projected and it took the right turn.]

So in case you can’t tell what the president and a Homeland Security’s acting secretary Kevin McaLeenan, who was the guy who handed him the chart, uh, they apparently took a sharpie and just add it on to the, uh, cone of uncertainty for the storm to include parts of Alabama, thereby making Trump’s claim just a few days earlier. Not Wrong. They altered a hurricane projection map in an attempt to make the president seem correct, except they did a very poor job of it. I mean, let’s be honest, folks, they had three days, right? They could’ve photo shopped a, a grand new thing. They could have made it look official, but no, no, no, no, no. They, they, they half-assed it like they do everything else and just said, screw it. Get a sharpie. I’m going to draw another extra circle on here, even though it doesn’t fit in with how the cone of uncertainty works for hurricanes, you know, just had a little bubble at the end cause oh, there’s Alabama that, that, that’s, that’s not how this works.
And, uh, as Dennis Mezirow pointed out on Twitter, uh, he has a Forbes contributor who writes about whether that’s actually a felony. Donald Trump committed a felony just so he wouldn’t have to admit, hey folks, I was wrong. Sorry, I didn’t mean to say Alabama. I did. I was basing it perhaps on the spaghetti models from when the storm first formed, which actually is something he tried to do yesterday afternoon when he tweeted the following. This was the originally projected path of the hurricane in its early stages. As you can see, almost all models predicted it to go through Florida also hitting Georgia and Alabama. I accept fake news apologies. Um, now that, that map contained in that tweet there, that’s what they call the spaghetti model. Except that wasn’t actually even from the National Weather Service. And if you click on that map, you know, make it bigger so you can see it.
You’ll see at the very bottom where it mentions the fact that, hey, this isn’t from the National Weather Service or the National Hurricane Center, I believe, and this map is not meant to take the place of those maps. It’s, it’s only a bit of a supplement, but if they come out with something new, trust them, and not this spaghetti model, because that was made on August 29th when the storm was still way out there in the Atlantic. They didn’t know for sure where it was going to go and at that point, as you see for anybody who’s ever had to track hurricanes, it can quite literally go anywhere. They don’t know. That’s why they call it the spaghetti model because you have a hundred different strands going in all different directions because who knows? But again, that was created on August 29th Donald Trump sent out his tweet three days later when we knew that thing and moved, we knew there was a high pressure system coming down above the Gulf of Mexico that was going to make it make that northward turn, which it did.
So we knew, we knew at the time he sent that tweet, it was not going to hit Alabama, but rather than admitting he was wrong, this man suffers from such side severe psychosis that he was willing to alter a weather map, commit a felony. Just so he didn’t have to you say the words I was wrong and more to that felony cause I’m sure people are gonna ask about it. It is 18 us code two zero seven four about false weather reports and it states whoever knowingly issues or publishes any counterfeit weather forecast or warning of weather conditions falsely representing such forecast or warning to have been issued or published by the weather bureau. United States signal service or other branch of the government service shall be fined under this title or imprisoned not more than 90 days or both. So lock ’em up stick him in jail 90 days code is very clear.
We, we see that he presented a false weather map. I don’t know who drew it. Maybe that was Kevin McaLeenan and maybe that’s why Kevin was standing right there. He was proud of his sharpie work. But whatever it is, and obviously this man’s not going to go to jail for this. He’s not going to be impeached for it. Donald Trump can do whatever the hell he wants and he never faces any consequences. Thank you Nancy Pelosi. But he is so incapable of admitting that he makes mistakes like every other human being on the planet that he is going to drive this country to ruin. He would rather break the law than have to say, oops, I made a mistake.