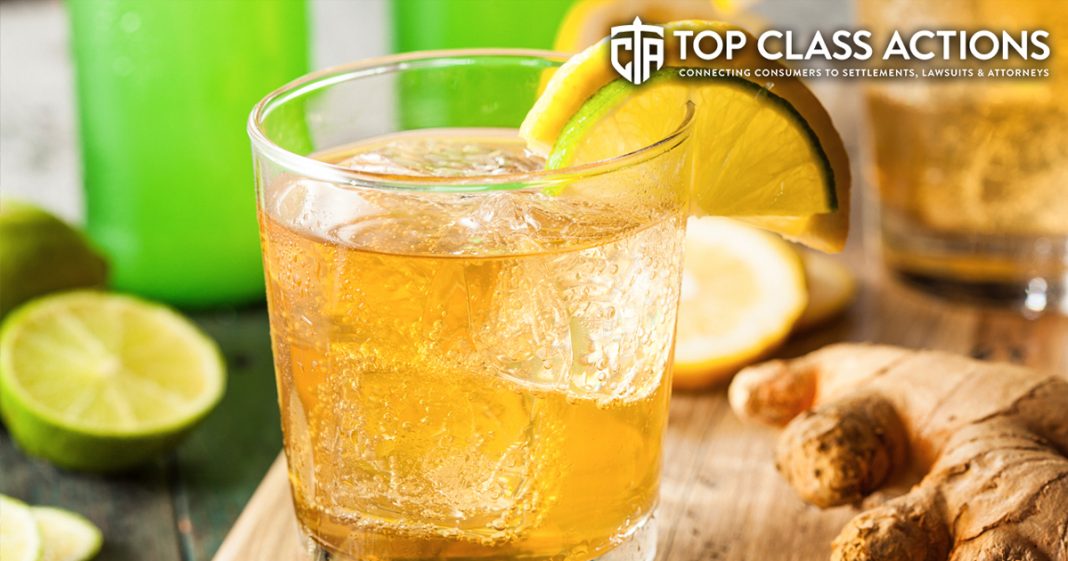 The Coca-Cola Company has agreed to pay $2.45 million to resolve allegations that their Seagram’s Ginger Ale products are falsely labeled with “real ginger” claims. The settlement will benefit individuals who purchased Seagram’s Ginger Ale between April 1, 2013 and June 13, 2019. Ring of Fire’s Farron Cousins discusses the settlement with Scott Hardy from Top Class Actions.

Farron Cousins:                  A lot of folks out there who work for corporations work for these advertising companies. They understand how American citizens operate. We would all like to be healthier and even if that means drinking a soft drink, you know that, maybe it’s packed full of calories, but it claims it’s got something good in it, we’ll be more likely to go ahead and buy that one instead of the sugar filled alternatives. But we have to be careful because not all of these claims are what they seem and that is why Seagram’s Ginger Ale made by the Coca-Cola company has now agreed to a $2.45 million settlement over their claims that their product actually has real ginger.

They are just saying, listen, you know, we’ll change how we are labeling these products and if you bought our Seagram’s Ginger Ale thinking that it had real ginger in it that you can actually get the $80 back. So I really applaud Coca-Cola with this settlement because it doesn’t have to be a $5 in your pocket. You know, claimants, if you actually are buying a lot of it can get up to $80 per household, which is a heck of a lot of money for a consumer product as soda related class action like this.

And if you don’t have proof of purchase, you’ll still be able to claim some money. But if you, you know, still have some receipts or you have some credit cards slips that show that you are shopping at your grocery store that you can send in, those can act as proof to try to maximize your claim and get that $80 back from this class action.

Farron Cousins:                  That is a, you know, I mean, that’s a pretty hefty sum of money considering we are talking about a, you know, essentially a soda here. So that, that is something that consumers do need to be aware of. And ,you know, as you and I have mentioned before, obviously most people aren’t going to go buy a ginger ale, save the receipt from the ginger ale. But as we have suggested, you know, hang on to receipts for a little bit folks. You know, just buy a, a $1 folder from, you know, any big box store or office supplies store, you know. See if your boss will let you have one from work, if you can, but just put them in there.

Keep them for, you know, 6 to 12 months, then toss ’em out. Again, do this and it could end up getting you quite a bit of money back because as Scott and I have pointed out on multiple different occasions at this point, there’s always lawsuits folks. There’s always settlements, there’s always issues out there and you can always get more if you have that proof of purchase. So again, get a small folder, something with a, you know, pocket in it and keep those receipts in there. Every time you go to the grocery store, take the receipt, pop it in the folder, put the folder back out of the way. Super easy to do and it could end up getting these people a lot more money back, couldn’t it?

That would take you four or five minutes of time, but it’d make you $80 potentially from just this class action. And so that’s where, you know, it’s all about maximizing your time and maximizing your claim. And if you can get that proof, like you say, then you are going to maximize your claims every single time. I’ve seen people that have received thousands of dollars from a single class action settlement because they had the documentation. It’s really gonna, you know, if, if you’re going to try to submit your claims for these settlements, save those receipts, that’s great advice Farron.

Farron Cousins:                  Absolutely, and to take that one step further, I will also say if you buy anything that ever costs, I would say probably $500 or more, keep that receipt for the entire life of that particular product. You know, sometimes with some of these suits we’ve talked about, if an electronic or a washer dryer goes bad, it may not be noticed until three or four years after that thing has been sold. So anything over $500, put that in a separate folder. Those receipts stay with you because those, that could save you a ton of money in the future if anything like this happens.

Plus it’s always good to have a proof of purchase in case of any kind of natural disaster. So there you go. That’s, that’s my helpful advice. But if anybody is a regular drinker of Seagram’s Ginger Ale, please follow the link in the description of this video, head to Top Class Actions, get all the information you need on this. And of course while you’re there, make sure you sign up for their weekly newsletter. Scott Hardy with Top Class Actions. Always a pleasure talking to you. Thank you.