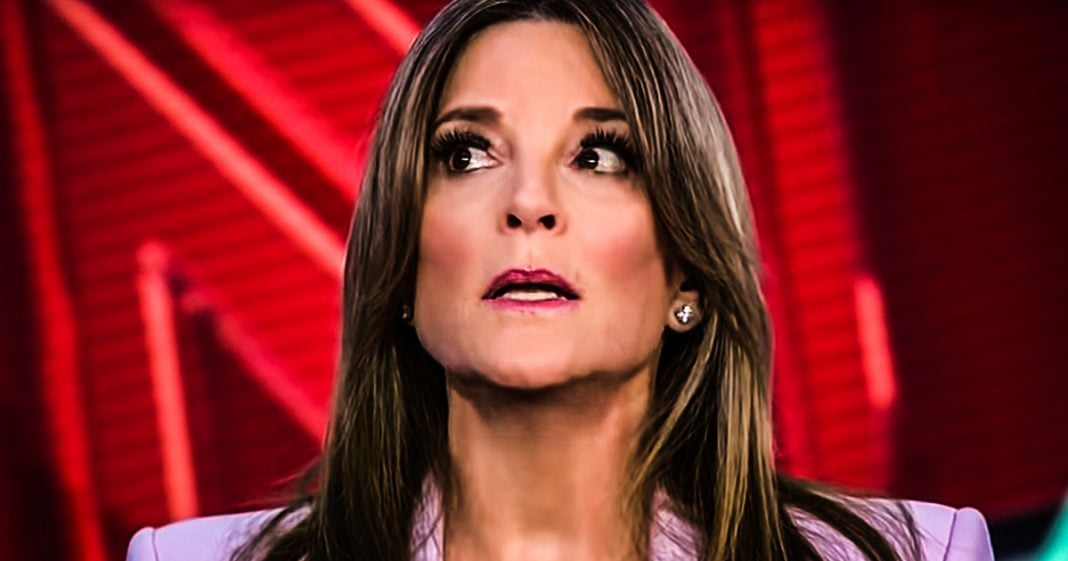 Democratic presidential candidate Marianne Williamson tweeted, then promptly deleted, a tweet on Wednesday about how the power of positive energy helped push Hurricane Dorian away from Florida. Were the people of the Bahamas just not positive enough, or did the storm simply follow the weather patterns that scientists told us it was going to follow? Ring of Fire’s Farron Cousins discusses this.

*This transcript was generated by a third-party transcription software company, so please excuse any typos.
On Wednesday, Democratic presidential candidate Maryanne Williamson tweeted and then promptly deleted something from Twitter, letting us know that it was the power of positivity that actually made hurricane Dorian swing away from the Florida coast. Here, thanks to the good people of Twitter who screenshotted the tweet is what Marianne Williamson had to say. “The Bahamas, Florida, Georgia, and the Carolinas may all be in our prayers. Now, millions of us seeing Dorian turn away from land is not a wacky idea. It is a creative use of the power of the mind. Two minutes of prayer, visualization, meditation for those in the way of the storm.” That’s right. Folks. As somebody who lives down here in the state of Florida, I can tell you we were all with power of our minds making that storm go that way. Um, here’s the thing. This is nuts. Okay. Can we all agree on that fact?
Right? This is nuts, I mean, at least she had the good sense to delete it, but the fact that she had the audacity to even say it, that’s kind of nuts and that’s kind of what Marianne Williamson represents. I don’t know why anyone on the left ever took this woman seriously as a presidential candidate, hurricane Dorian did not swing away from the state of Florida because of positive thinking. It swung away from the state of Florida, which the scientists predicted it was going to do because a high pressure system was headed down towards the Gulf of Mexico, which would drive the storm northward instead of continuing on westward. That’s, that’s how they determine the models for these things. They’re not always correct as those of us who’ve been through many hurricanes can tell ya, but they usually are. They can predict weather patterns. We have satellites and we have experts that do these kinds of things, and once it became clear that that high pressure system was going to move down into the Gulf of Mexico, or at least along the Gulf coast, it became obvious that yes, the storm is going to turn.
Now. They didn’t know that it was going to sit for 24 hours over The Bahamas, but that sitting is also due to the atmospheric conditions not being a conducive to the storm continually to move west. Yes, we could have predicted it and no, it was not because of the power of positivity that the storm turned. And for the record, Marianne Williamson, I know you’re saying, you know, thoughts there. Two minutes I guess is all you’re calling for, of thoughts and prayers basically for the people still in the storm’s path. But this thing is still going to make landfall in the United States. It’s either going to go in to Georgia, South Carolina, possibly even North Carolina. Hell, it may even travel up a little bit further there, but it’s not because these people aren’t thinking positive thoughts. It’s because that’s what happens with these weather patterns that people are not out of harm’s way. And yes, Florida did still sit there for 48 hours getting battered by the outer bands of this super strong hurricane. And it’s not because they were only thinking semi positive thoughts. It’s because that’s what happens with weather. You can’t control it and you can’t change it by thinking good things. What we can do to help cut down on the number of massive hurricanes we see every year is maybe listen to the scientists and start taking the issue of climate change seriously instead of the people who think we can pray away the wind.